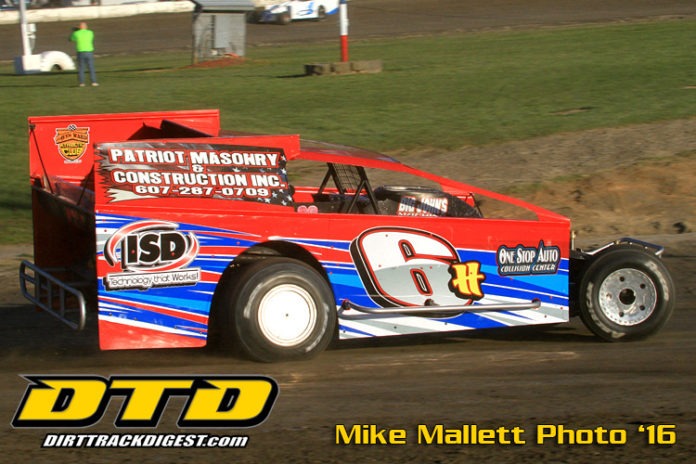 Everyone involved in dirt racing knows just how hard it is to get out once the bug has infected you. Regardless of how much you want to get away from it, it almost always finds a way to bring you back. That is the case for former I-88 Speedway promoter Jamie Page.

Jamie and his wife Denise ended their run as promoters of the Afton facility in December at the season ending awards banquet. Although they made the choice to step away from the speedway, they aren’t done with their involvement in motorsports. Page and J.R. Hurlburt announced yesterday afternoon at the driver’s annual benefit party that they’ll be teaming up for an assault on the Short Track Super Series North Region in 2017.

“We’ve become great friends over the years,” stated Page of Hurlburt. “J.R. helped us out at the track and now I’m happy that we can help him out with a car to go on the road. I’m really looking forward to the opportunity to stay involved in the sport working with J.R. He’s a great guy and I think we are going to have a lot of fun this year.”

For Hurlburt it will the first time in a long time that he’ll be able to run other tracks besides his home track in Afton. Hurlburt does have success outside of Afton as he was a past champion at the Thunder Mountain Speedway.


“I don’t think you could ask for a better group of people to work with,” said Hurlburt. “Jamie and Denise are great people. I’m very fortunate to have their support this season as we go out and race on the Short Track Super Series.”

Hitting the road is not the only change Hurlburt is making to his program. The Otego, N.Y., driver, affectionately known as the “Heavy-Foot,” will have two new cars. One car was purchased for his deal with Page and another for his family run team which plans to return weekly to Afton. It’s the first time since 2009 that Hurlburt will compete in brand new equipment. The new cars are from Bicknell Racing Product, something new to Hurlburt as he’s been a Troyer loyalist until now.

“I just think it was time for a change,” commented Hurlburt about the chassis switch. “We had a lot of success in the Troyer car over the years but we were looking to try something different. We figured since we were getting a couple new cars now was the time.”

The teams receives support from a variety of sponsors. It’s a group of loyal supports that Hurlburt was quick to thank for the opportunities he has in 2017.

“We couldn’t do any of this without the great people behind us,” said Hurlburt. “We have to thank Patriot Masonry, Algonkin Motel, Ace Glass Company, ISD Computer Specialists, One Stop Collision, Otego Tire and Auto and Butler Auto Sales.”

The team is set to receive their two new cars in early March. From there they’ll make their debut at the Short Track Super Series opener at the Orange County Fair Speedway in early April.