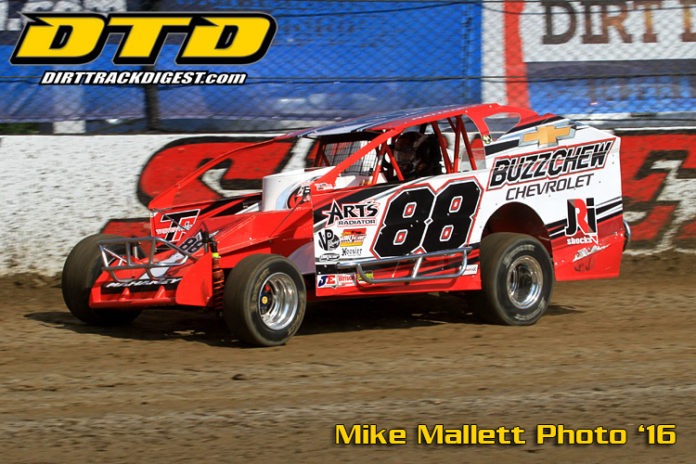 Mike Mahaney has spent every February of his racing career home in Upstate New York wishing he was competing with the drivers of the Super DIRTcar Series at Volusia Speedway Park in the DIRTcar Nationals. His wish has now become a reality. In just over a week he’ll finally get his first chance to bring home a coveted gator trophy.

The King Ferry, N.Y., driver and his Buzz Chew Chevrolet team are currently putting the finishing touches on their Performance Engines by Billy the Kid powered Troyer Cars so they can head south to open the season in the warm Florida sun.

“This is an awesome opportunity,” stated Mahaney. “I’ve always wished I was there and now I get to be there and see what it’s all about. We get to see what we can do.”

This is Mahaney’s second year behind the wheel of the Buzz Chew No. 88 machine. The team was put together last off-season after the Buzz Chew team defected from the pavement world to dirt racing. Although they got out of the box slow, they started hitting their stride in the summer time before ending the season on a high note. Mahaney hopes to continue that progress during their trip to the Sunshine State.


“I feel like we are the world ahead of where we were last year as far as being prepared,” commented Mahaney. “At the end of last year we were running much better than where we started. Now, even working in the shop, we got our equipment together even more so than then. I have Buzz to thank for that. He makes it possible to work with the kind of equipment I could only dream about prior to joining his team last year.”

Mahaney attributes the improvement to the dedication and hard work the team has put in since it was put together. They’ve constantly made changes and adjustments in order to get to the point where they were working well together.

“Spot (Ron St. Marie) and the rest of the guys on my team have put in so much work from the beginning to get our entire team to where we are at,” he said. “It takes that. You can’t just buy a car and go out and be competitive. You have to get everything gelling. There are so many different aspects that have to be right to be fast on given night. If two or three things get left out then you aren’t there. Buzz allows us make any necessary changes to all aspects of our program. Toward the end of the season we got that all together where everything was close. In the offseason we are making more improvements from there.”

Since Mahaney hasn’t been to Volusia, he’ll have to quickly adapt to the fast half-mile if he wants to be in contention against the veteran drivers that have turned hundreds of laps at the Barberville, Fla., facility. He’s confident that he’ll be able to quickly get the handle on the track. He has high expectations for himself and the team.

“There probably will be a little bit of a learning curve with the race track,” cited Mahaney. “I’ve never seen it. In the past I’ve gone to new tracks and done well anyway. I’m not going to lower my expectations because of that. I really think we can go down there and do very well. I’m really confident in our equipment. I’m excited to see what we can do. I’ve got as much confidence as I’ve ever had going to a track that I’ve never been to.”