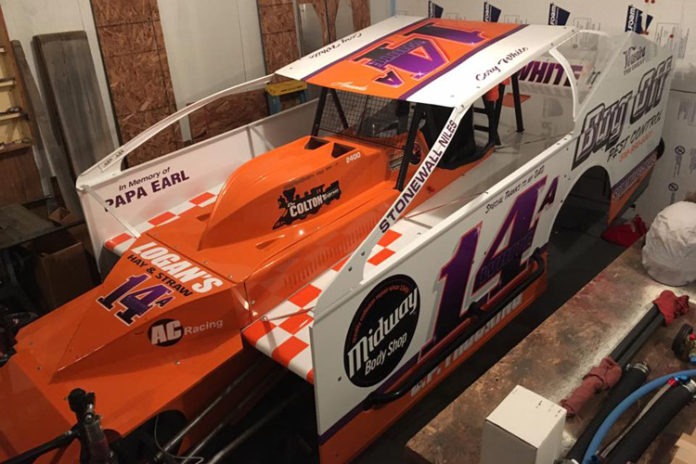 As a young boy sitting in the stands at the Fonda Speedway, Cory White always dreamed that someday he’d be on the track turning laps with some of the best drivers in the Northeast. That dream is about to become a reality as White puts the finishing touches on his 602 Sportsman for competition at the “Track of Champions.”

White, working in conjunction with fellow Sportsman driver Anthony Cardamone, had originally planned to make a debut last fall after working out an opportunity with the team. Unfortunately things didn’t come together, but this off-season things are moving quickly as the car is being built and will be ready for opening day.

“I’ve always wanted to do it,” said the 28-year-old White. “I’ve been a Fonda fan my whole life. They (Cardamone family) offered me the equipment to go out and try it. With that I said yes after I got it approved with the other half.”

When White eventually hits the track in early April it will be his first time in a race car. He doesn’t have a history of kart racing or anything like that. As a result he understands there will be a large learning curve. He plans to just stay out of the way until he learns the ropes.


“I’m excited and nervous,” stated White. “I’m excited because I’ve always wanted to do it. I can’t wait to get out there but nervous because I’ve never been in a car before. It’s a new thing all together. The plan is to stay in the back, stay out of the way and learn.”

He’s very realistic with his goals, it isn’t about winning but keeping the car in one piece and completing laps. The only way to improve is to run as many circuits as possible. Regardless of what happens, White is just thankful for the opportunity to get out on the track.

“At the end of season I want the car in once piece without spending a couple grand trying to fix everything,” joked White. “Hopefully I don’t do anything dumb and end up on my roof. I just have to get used to it. I understand the time and finance side of it. Hopefully I’ll get lots of seat time. If I get the chance to run up front by the end of the season that would be great, but if not I’m happy just having the chance to be out there.”

White’s car has been numbered 14a. It’s a tribute to his favorite driver, Jack Johnson. Anyone that was at the first Jack Johnson Tribute race two years ago will know White as the driver of a pickup truck lettered up in support of Johnson. On that night he was allowed to pace the field.

“I always wanted to run 12a, but out of respect I just couldn’t do it,” mentioned White. “I don’t care what division you are in at Fonda, the 12a is off limits as far as I’m concerned.”

The Fort Plain, N.Y., native has received support already from Mike Romano at Andy’s Speed Shop with setups and Ronnie Johnson has helped with getting together and fixing some used parts for the team to run. He’s also lined up sponsors in Bug Off Pest Control, Midway Body Shop, Sportsmans Choice, Ron White Transport as well as Paul and John Lakata at Barney Signs.

“I couldn’t do this without the support of so many great people,” stated White. “I have to thank the Cardamone’s for all of their help and I definitely have to thank my dad (Joe White). He’s gone out of his way to support me.”

White’s in car racing career begins when the Fonda Speedway opens in early April, but the first outing for his race team is this Saturday (2/11) at the Elks Club #2621 in Nelliston, N.Y. The team has a fundraiser scheduled that includes a spaghetti dinner, 50/50 raffles, Chinese raffle and more.  The cost is just $10 with kids five and under free.