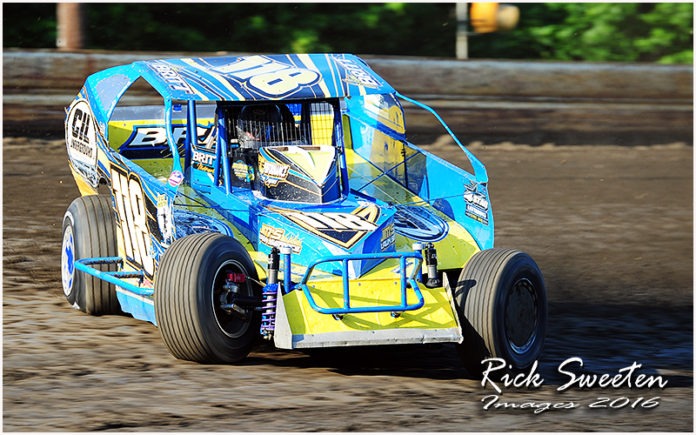 Bridgeport Speedway big-block Modified driver Jim Britt has added Big Diamond Speedway to his weekly schedule for the upcoming season. The veteran driver out of Newtown Square, Pa., plans to be a regular competitor at the Minersville, Pa., track in 2017 as long as everything goes according to plan.

Britt, who has seven career Sportsman wins at Bridgeport to go along with a crowd pleasing big-block win last season in his first year of running the division, is hoping the extra track time at another speedway will help him when the team travels to the many different tracks on the Brett Deyo STSS South series.

Last season the team made its first ever start at Big Diamond when they qualified for the season ending Coalcracker race.

“We are definitely going to start the season out there, not a 100 % sure we will run the whole season there but we are going to try so we’ll see how it goes. I own my own business so we’ll see how two nights of racing goes. A lot of our work is up and down the east coast, mostly from New York to Virginia. I am a big fan of small-block racing and that’s really why we decided to go to Big Diamond on Friday nights to race. I like big-block racing but I feel I am a little better at small-block racing than I am in the big-blocks.”

The team has an arsenal of equipment ready for their hectic schedule. Britt just recently purchased a Chuck Cicci big-block motor from Mike Iles to use as his primary motor to start the season. The team also has last year’s big-block available which has just come back from being freshened up. The team debuted a 358 spec engine late last season which Britt says is a very potent piece and had some very good runs with it late in the year. Jimmy Weiss out of Manalapan, N.J., built the small-block and also is the one who freshened up last year’s big-block. The team also has an open small-block to drop into one of the teams two Hig-Fab chassis when the need arises.

“Our Hig-Fab car seems to work well.  Our Sportsman car was a Hig-Fab car and we did well with that. We had a brand new spec head small-block built at the end of last year and believe it or not we ran it at a lot at the end of the year special shows and we ran really well with it. I think we finished fifth with it at the Delaware show against the big-blocks and we qualified for the Coalcracker with it. We also ran at New Egypt with it and ran pretty good there. Our Hig-Fab small-block car seems to be pretty decent.  We’ve had more issues with our big-block Hig-Fab car. We did win with our Hig-Fab BB car at Bridgeport but we struggled with side bite for most of the year.”

Britt will also being switching shock manufacturers this season going from Fox Shocks to Penske Shocks which he has run before and feels more comfortable with.

“I ran Penske shocks before and never had a problem but Jerry (Higbie) asked us to switch to Fox Shocks because that is what he understands. We won the race at Bridgeport last year on the Fox Shocks but I just seem to understand the Penske shocks a little better. I can also call Dave Reedy (Penske Shock Rep) and he will talk to you. Plus Dave will be in Florida to help us out when we have questions. Dave is a pretty smart guy and does a lot of testing with Larry Wight and I think they have switched Pat Ward to Penske’s as well for this year. We just got our shocks for Florida back and Dave has told me what to run on Tuesday night for practice and then to come see me.”

To add more work for the team, Britt is taking his driving talents south for the first time ever to compete at Volusia Speedway for the DIRTcar Nationals. Britt has never raced on the Barbersville, Fla., track but has been there before helping out Jamie Mills many years ago.  He is hoping he can use some of that experience to get quickly acclimated to the speedway.

“It was actually something that was in our plan and not a spur of the moment decision. We talked about going last year but we didn’t quite have everything in order and then we started a big project down in Virginia for work.  I couldn’t commit to taking that week off. So this year we started planning it around September. I go to Florida personally with my family every year to Disney for two weeks for Christmas so when we went down there this year we booked a campground right up the street from Volusia for the week of the races. I have a 42’ fifth wheel camper that I bought two years ago that we will take down along with the truck and trailer for the race car. My whole crew is going with us to help out along with Brad Roberts and his crew chief Keith who also works for me at CIL. We are going to go down there and try to have some fun. I used to go down there with Jamie Mills years ago so we’ll see how it goes. We are taking my favorite Hig-Fab car to Florida with the big-block in it we just bought from Mike Iles so I know that is a good piece. The car has been completely gone over and everything is brand new on it so we should be good there.”

The team is also looking to travel whenever possible and hit all the STSS South races along with a couple of the STSS North races as well.

“We are going to do the Deyo South series along with maybe a trip to the Thunder Mountain North race. I like that track a lot. Its dusty little track but I like those small tracks and I seem to run pretty good there. We also might try to hit Outlaw Speedway at least once maybe twice. I know that Deyo has a race there and DIRTcar also has a race there this year so we might hit those shows as well. We will also probably end up doing the Delaware series since it is so close.”

To help the team this season with its busy schedule, Britt has purchased a brand new 40 ft gooseneck trailer to replace the 30 ft trailer the team had been using along with new GMC top kick truck to pull it with. Britt explained that the added space will save the team time from having to switch out tires and such when going from track to track.

With such a busy racing schedule along with his business, which has doubled in the past three years, Britt relies on others to maintain his stable of modifieds so he can concentrate on his business and on his driving.

“My business in located in Broomall, Pa., and I live in Newtown Square, Pa and I don’t keep the cars at either place. They are kept at my brothers Kevin’s house which is five minutes away from Bridgeport Speedway, so he pretty much maintains them for me. With as busy as the business is now I just don’t have the time to work on them constantly. I try to get down there once a week to help, but for him all he has to do is walk out his back door and he is at the garage so he pretty much does all the maintaining of the cars. One of my other crew lives about four houses away so he is able to help out a lot.”

After getting out of racing a few years ago and coming back, you can sure tell that Jim Britt is definitely 100 % back in now. Hard work and dedication along with a thriving business and a very supportive family that supports him in his racing endeavors can only mean that success seems to be right around the corner for the 37-year-old Britt.