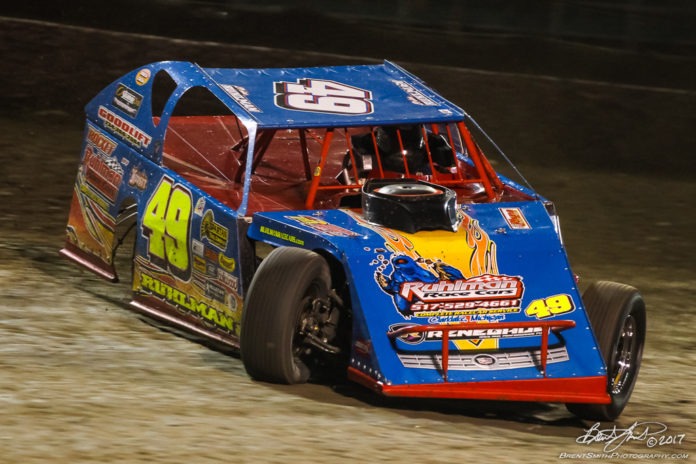 Clarklake, Mich., is quite a long way from Volusia Speedway Park, but annually Brian Ruhlman makes the trek south to compete against modified drivers from all over the nation.

Entering his 31st year of racing he is near the top of the points after two nights of the DIRTcar Nationals.

These UMP Modifieds are significantly different from the big-blocks of the Northeast, but they are a national series. Although the frames may appear similar to the IMCA mods, the motors generate upwards to 800 horsepower.

A competitive Modified probably costs anywhere from $30,000 to $60,000 with motors ranging from $15,000 to $30,000. Ruhlman explained, “Whether it is a IMCA, USRA or whatever series they have a bar front frame. There are thousands of these all over the country.”


Ruhlman hailed from humble roots as he said, “I started at Stateline and Eriez Speedways (in northwestern Pennsylvania) and won seven or eight championships. I moved to Toledo (Ohio) in 1995 and started running Oak Shade and Eldora Speedways.”

Admittedly he enjoys “bigger tracks”, as evidenced by five track titles at the legendary high banks of Eldora. He proudly talks about his accomplishments as he said, “I am the all-time feature winner at Eldora and overall with the tracks I’ve raced I have earned 20 track championships.”

Nightly fields at Volusia are some of the strongest in the nation. He cited, “Half the field can win here on any given night.”

His first two nights in the Sunshine State haven’t been all that bad. Looking at night one he stated, “We had fast time and won our heat. We then ran second place in the feature. I ran the upside the last couple of laps, but couldn’t get it.”

On Wednesday he once again captured his heat and dropped back a bit at the start of the 20-lap race only to start picking up spots. He eventually settled for third behind Nick Hoffman and David Stremme.

Ruhlman’s style is “smooth”. He noted, “I will race every guy the same as courtesy and respect are important when you are out there on the race track.”

Money isn’t the drawing power to haul to Florida as these cars usually run for $600 to a $1000 on a weekly show with specials paying a bit more.

Brian explained, “This is a lot of marketing for me,” and this is the opportunity to drum up business for the successful car builder.

Many race fans who follow this type of modified realize the talent Ruhlman possesses, but this isn’t his regular stomping ground.

He said, “I am still a Late Model man and I run them about 50 to 60 times a year while I might run the Modified about 20 times.”

By early next week Brian Ruhlman hopes to withstand the test of the competition and collect his gator to bring back to Michigan.