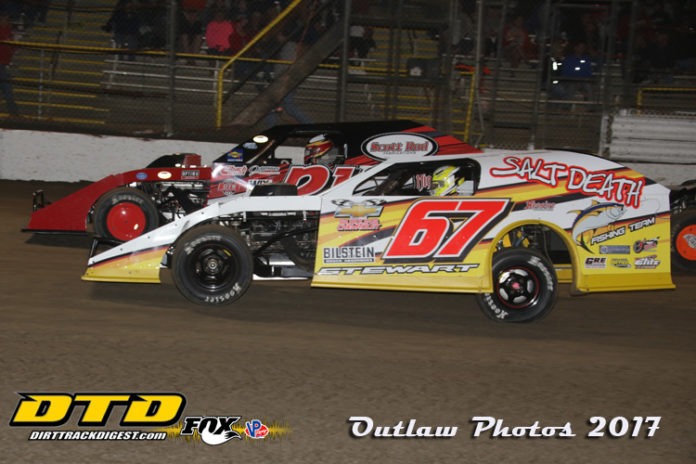 Garrett Stewart of Leesburg, Fla., finished fifth in the 20-lap main-event at Volusia Speedway Park on Wednesday night in the second show of the week for the UMP Modifieds.

He jumped from his car and embraced his father for nearly a minute.

It was a special moment.

Stewart said, “This is just about a win for us. We race locally and this is like our Super Bowl.”


The night before his expectations went right out the window as he was far down in the point standings after feature number one.

He said, “We qualified eighth out of nine and we tried some stuff.”

However, last night he won his heat, but also finished fifth in a star studded field. As he drew for one of the top six starting positions, the announcer indicated it was his first heat race win at the Nationals in seven years.

Stewart explained he has high expectations for the event and noted, “This is my home track and to put a local car in the top five against this field is exciting. We are a family team and this finish is special.”

In front of him at the finish line were Nick Hoffman, David Stremme, Brian Ruhlman and Kenny Wallace.

He said, “Hoffman, Stremme and Ruhlman build chassis’ for a living and Kenny probably had a lot of help. They are basically factory teams and we are just a local team with me, dad, my girlfriend and a few others.”

Stewart is one of the top regular drivers at the weekly shows at Volusia, but on this night he celebrated with the stars of his class.

This place is home to Garrett Stewart and so much so that he notes, “I want to pit in the infield and not out back near the gator pond. This is where I run and this feels good tonight.”