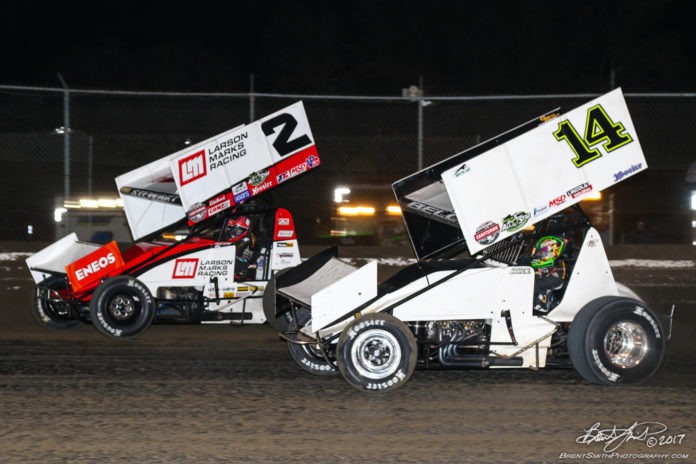 “I would have been happy with sixth or seventh, but once we got in line I was able to start passing early on,” said NASCAR star turned Arctic Cat All Star Circuit of Champions driver for one nigh Kyle Larson.

The night was relatively uneventful for Larson after he was given the opportunity to get in a car that has been traditionally driven by Christopher Bell.  It’s a No. 14 which is owned by Tony Stewart.

This was a one night deal. Kyle explained, “Chris said he couldn’t make it for this show when I talked to him earlier this week. He told me to text Tony (Stewart) and I did. It actually came together at 1 o’clock on Monday afternoon.”

He had finished fourth in his heat and started the main in a rather unspectacular 15th.


However, at the finish line he was just .113 of a second behind eight time World of Outlaws champion Donny Schatz.

Standing alongside his hauler after a hectic night of racing Larson had a smile on his face and he reflected on the 30 lapper.

“When I was passing early on I knew I had found something. On the restart after the red (for the Joey Saldana and Jason Johnson accident) on the lap 15 I figured I was fifth or sixth. I knew I had been passing cars early and even though I wasn’t exactly sure of where I was I knew that I was moving forward. After that restart we just got on a roll.,” explained Larson.

Another red stopped the field on lap 19 when Brent Marks hammered the outside wall on the front stretch and landed on his side.

Two laps later Larson got past third place runner Daryn Pittman and the next lap yellow bunched the field up again.

With just three laps to go Larson pulled a slide job on Chad Kemenah in the second turn to capture the runner-up position.

Looking back at the pass for second, Kyle commented, “It might have been close and even though I didn’t feel him I think Chad had to back pedal a bit.”

The last lap saw Schatz with a nearly insurmountable lead, but he was having difficulty with a lapped car that simply held its line.

He had “something”, but it wasn’t enough as Schatz won his third race in four Florida starts.

Larson knew this was a one night deal and was very appreciative.

He said, “I love getting in a Sprint Car and I had a blast tonight. I really have to thank Tony Stewart and the Tony Stewart Racing team for letting me do this.”

Volusia fans saw Kyle Larson come back home on the second night of the Nationals and despite not having many opportunities to run a Sprint Car during the season he put on one heck of a show.