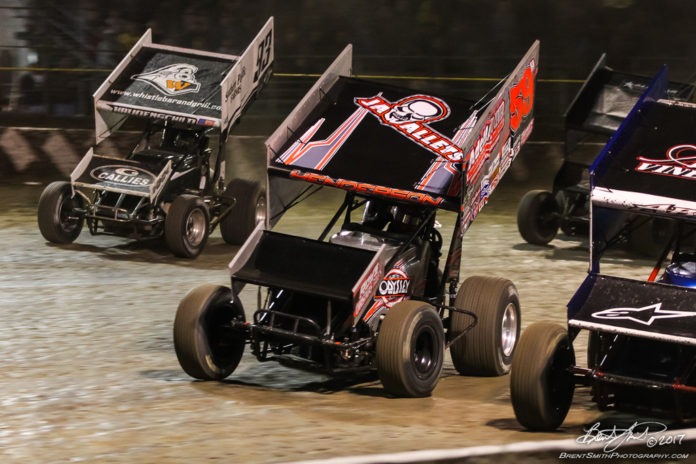 Donny Schatz wins by .113 over Kyle Larson, a frightening accident sends Sprint car soaring over fence and sixty-one UMP Mods battle for one of 28 starting positions.  That was my Wednesday night.

Those three things alone make for what could be an interesting night at the race track and Volusia Speedway Park had that and so much more as night two was conducted on the high speed half mile.

Schatz Does It Again

With a champions front row of WoO titleholder and ASCoC champ Chad Kemenah alongside it was sort of a foregone conclusion that this race was over before it started.


Schatz won after he saw his two second lead evaporate in the final two turns as 15th starting Kyle Larson was closing fast.

In victory lane Schatz said, “I really couldn’t hear anyone coming, but I couldn’t get off the top as the car in front of me was right there. However, with this field I knew someone had to be coming.”

Two red flags slowed the event and asked about making changes during the delay, Schatz explained, “We didn’t make any changes as we expected the car to come around during the race.”

In one of the most frightening accidents in years Joey Saldana took a ride that will be viewed millions of times on Youtube or other outlets.

Jason Johnson and Saldana were battling for second place.  Over the course of the race many drivers were taking it to the wall in turn two.

At full speed and full bore the two made contact sending Saldana into the air flipping above the track-side barrier (which is several feet high). Separating the pit grandstands from the track are probably several feet of grass, the fence and maybe another ten foot walkway.

Saldana got above the track barrier as he flipped. However, he continued to gain altitude and soared above the fence. From the frontstretch there was a moment when you thought he might get into the backstretch stands.

He bent the top of the catch fence and then clipped the end of the bleachers, breaking a couple boards at the bottom. He continued through another chain link fence finally coming to rest well outside the back straight.

At one point his car made contact with the boom of a tow truck and that might have helped slow down the wildly flipping car.

Announcers said the drivers were okay.

In the pits the Johnson crew was busily removing the front axle from the 41 while the 17 of Saldana’s finally arrived only to have bad luck continue as the boom on the tow truck broke sending the car smashing to the ground.

Both of the drivers are World of Outlaw regulars and it wasn’t certain if they would return for the final night of the All Stars on Thursday night as their point season begins on Friday.

Ten car heats with top three getting in make it rather a difficult proposition.

These guys are far from a support class and they race multiple grooves and put on a solid show. With talent from all over the place heats are like mini features.

These guys race for nearly a week before chasing their gator trophy. Talk about investment.

35 sprints started the night, but Jason Sides was out with a broken rocker arm after hot laps. He said they could have fixed it, but noted that he is an Outlaw and so it wasn’t critical to run the All Star show…

Rico Abreu started on the second row of the B and by the time the top three were between turns one and two he was leading. He did it with a inside fence hugging maneuver. He ran away with the B…

Kraig Kinser came from the B and it appeared he was going to finish in the top five as he was right there with just a few laps to go. He did end up sixth…

Dale Blaney was out in the Zemco car for the first time and finished seventh..

Lucas Wolfe is in Florida with the orange 5w. On the wing is Orange Crate Brewing Company, Syracuse N.Y….

Chad Kemenah launched the car from the outside pole in the main to the lead and I think Schatz thought it was going to be called back. It wasn’t….

Brian Brown was fast time, but his night went south after that as he eventually finished only 11 laps…

Daryn Pittman and Brad Sweet finished fourth and fifth as they are out for the first time this year….

I Had good visits with Ron Hedger, Lowell Zehr and Dave Dixon. You can usually find someone you know around the track. Will know many more when the big-blocks arrive next Tuesday for practice….

Christopher Bell is in the TSR 14 the rest of the week. This isn’t the car Tony Stewart drove at Bubba. It is a car that TSR had Bell run in the past and they brought it along. No word if Tony is running at all the rest of the week, but you get a feeling he probably won’t….

I had great talks with Brian Ruhlman and Paul McMahan and those will pop up in the next few days on Dirt Track Digest….

Dave Farney was waving the flags. A yellow on lap 22 of the Sprint main was a result of the high winds combined with the turbulence of the Sprints sending the checkered flag from the starter tower to the front straight…

Check out DTD photo galleries as George Smith and Brent Smith were snapping all sorts of pictures. Some are posted already with more to come…

Modified list of drivers coming down appears to be growing by the day. It should be fun…

If you get your fill of Sprint cars by Sunday there is a major show at New Smyrna as the K&N East teams are in and 28 are entered and they will be joined by the Southern Sprint Car Shootout Series on the asphalt.

Hope you enjoy the DTD coverage and it will expand as the action continues.

Information or comments can be sent to foley395@hotmail.com