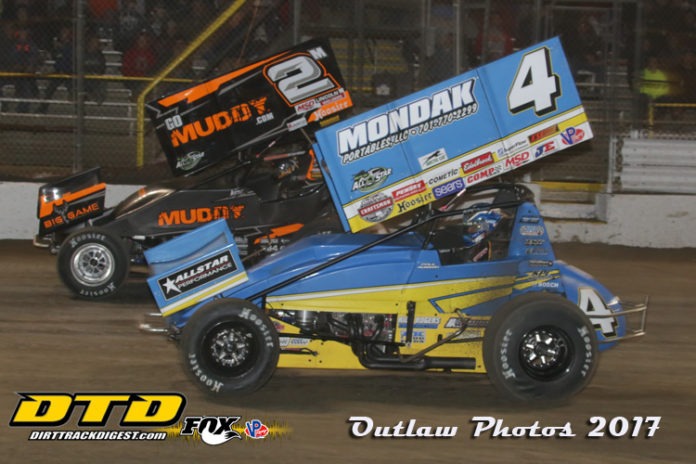 Paul McMahan has come a long way since his early California roots were planted in a race car.

Prior to Wednesday action at the Arctic Cat All Star Circuit of Champions date at Volusia County Speedway, the World of Outlaw regular was confident that this is going to be a good year.

He said, “Entering this season I really want to be consistent. Last year we were not consistent and I want to win again. I never had a year that I never won a race, but owners Rick and Barb Rogers along with Mondak Portables have given me a great team for this years effort.”

There is a new look to Destiny Motorsports this year. Blue is the dominant color on the car. Paul jokingly said, “Well, portable toilets are blue so why not have a blue car?”


Paul and his team got an early start as they have run all the ASCoC shows in Florida.

The egg shaped Bubba Speedway had the three nights last weekend. Paul said, “Bubba works his butt off to give us the best situation. There is about 18” of dirt on top of the asphalt. When it is really wet is it hard to pass and when it is dry it is tough to pass. You have to find a happy medium. Donny Schatz sure figured it out as he could pass cars there.”

Turning the VSP he said, “This is just an old, fast half-mile. It is wide open and sometimes slicks off, but you really make speed here.”

The first night didn’t start out the way he really wanted as he timed 25th of 34 cars. However, fourth in his heat, with a late pass of Aaron Reutzel put him at 17th on the starting grid, but he rallied to move up to 10th at the finish.

For 20 years he has been a traveler and asked about the stress he said, “It is not hard on the body as I’ve done this for so long, but it is hard mentally. You are away from home and away from your kids when you might be on the road for months at a time. It is the daily grind that is tough.”

No one could blame him for having his mind elsewhere recently as the threat of the dam collapsing in California hit him close to home.

He commented, “My wife’s family and all of my in-laws and their friends live in that community and they had to be evacuated. I think about it a lot during the day, but when I get in the car I have to focus on something totally different.”

Originally, from California he now resides with his wife in Nashville, Tenn.

He explained, “My wife has friends in the music industry. I had to live somewhere as I would be traveling, but I really like Nashville.”

His children are now 18 and 21-years-old and those road trips away from them as youngsters are gone. However, with a smile on his face, he said, “My son works for Parker Price-Miller so I get to see him out on the road.”

McMahan has one of the more interesting nicknames in racing as “Pauls to the Wall” is his moniker. He said, “My buddies in Pennsylvania gave it to me. There were all sorts of nicknames, many that wouldn’t look good on a t-shirt. So we settled for that one.”

He has come a long way from his quarter midget days on the West Coast.

Paul noted,”Even in those days I had a dream of following the World of Outlaws.”

In fact when reflecting on some of the early competitors in Sprint Car action he said, “I raced against some of the great names in California including Tim Green, Brent Kaeding, Jimmy Sills and Chuck Guerney among others. I guess I am showing my age a bit.”

Reflecting on the evolution of the sport since he first slipped behind the wheel he said, “I remember when I first started a $10,000 piece (motor) was state of the art. It really has changed.”

McMahan is just hoping that consistency will become a major player in his 2017 season and he is confident and thankful for the opportunity to be a member of Destiny Motorsports.