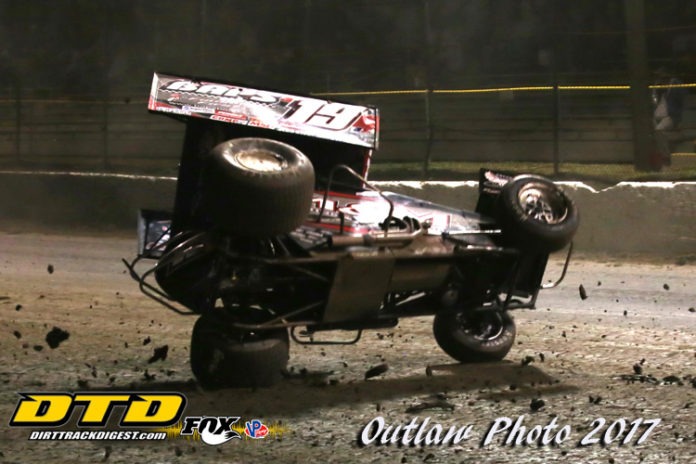 Three promising Sprint Car rookies had a night they would rather forget on Wednesday at Volusia County Speedway.

Ryan Smith, Brent Marks and Sheldon Haudenschild all indicated their intentions to chase the rookie crown in their respective orgnizations. Smith is an ASCoC competitor and the other two will start their quest on Friday night with the World of Outlaws.

However, Wednesday night wasn’t kind to them.

Haudenschild at least went home in one piece, but was in a qualifying spot in the B-Main before falling to sixth and a DNQ.


Sheldon appeared solid in the B and midway was having a major fight for position with Ian Madsen. A substantial advantage disappeared and Danny Dietrich joined the fray for the last half of the 12 lapper.

Haudenschild lost the spot late in the race and loaded up.

Meanwhile, the other two drivers and crews will certainly have their work cut out for them if.

He said, “The rear axle broke going into turn three.”

The wheel left the car and went airborne clearing the outside fence at it soared nearly 50 feet over the banners. The 59 hammered the wall as the back end came around.

In the pits, as Ryan assisted his crew in tearing apart the car, he said, “It gone and we think the motor is okay. This car probably had 15 races on it last year.”

The team debuted at Bubba Speedway last week and seemed to get better as the nights went on.

However, he said, “This is the best the car has run and it figures that when you finally figure things out something happens.”

Marks was making his 2017 debut, but on the 19th lap he got sucked up into the front stretch wall.

The car ended up on its side in the middle of the front stretch.

In the pits after the night was over the 19M sat with everything removed in the rear end.

One of his crewman noted, “It got the rear end, drive line, tail tank and we are still checking for other things. We are not sure if the chassis is bent, but we hope it isn’t,”

Volusia was not a night for these three rookies as two did not qualify and the other settled for a 20th place finish.