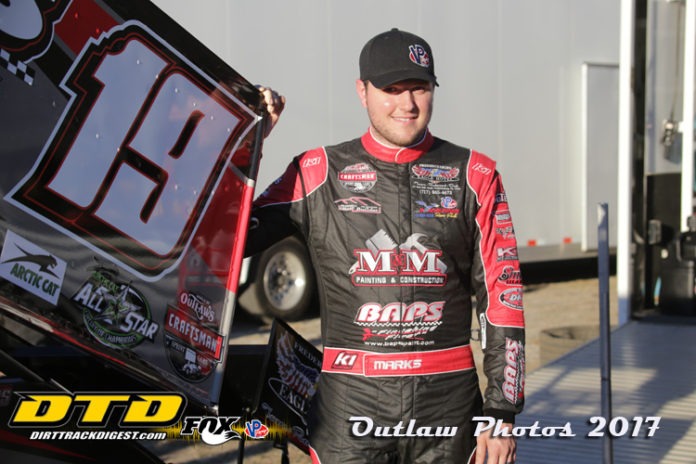 Brent Marks is making a giant stride to go from regional racing in Pennsylvania to the Craftsman World of Outlaws in 2017.  It will be the first time in his career that he’s been out on the road.

Marks, of Myerstown, Pa., commences his rookie of the year quest tonight at the Volusia Speedway Park, but he’s already faced adversity even before his “official” season gets underway.

He spent the past two nights competing with the Arctic Car All Star Circuit of Champions.

On the first night he ended up on his side in the middle of the front stretch. He explained, “Two cars got tangled up in front of me. I tried to get off the throttle, but got sucked into the wall. We had damage to the rear end, but everyone got it back together for tonight.”


Marks qualified both nights for the ASCoC main and on Thursday finished 13th despite some smoke coming from his engine.

What makes a 26-year old decide to tackle one of the toughest tours in the nation?

“Well, it has been my dream to do it. I want to race full-time and researched the best route for me to take. I own my own team and I had the sense to join the tour.”

He has raced with his father for years, but noted, “Dad is not as involved and he is going to let me fail or succeed on my own. I have great sponsors that have helped me put this together and I am looking forward to it.”

The preparation is immense as Brent said, “I have four cars and four engines just like most of the Outlaw teams, but I might not have as much as they do. I have raced 80 to 85 races in the past on a regional schedule so racing shouldn’t be a problem.”

However, he continued, that the biggest obstacle could be tracks. He mentioned, “I will be going to 43 new tracks this year and you only get a few laps to get to know each one. That is going to be a big adjustment having no laps on 43 tracks.”

The road is tough, but drivers will tell you it isn’t the physical, but rather the mental aspects that challenge them. Brent said, “I’m married and have a one year old daughter. They will travel with me when they can, but I’m sure I will miss them.”

Marks is ready to make is WoO debut on Friday, February 17 at Volusia as it is the first step to be taken in his quest to earn the “Rookie of the Year” title.