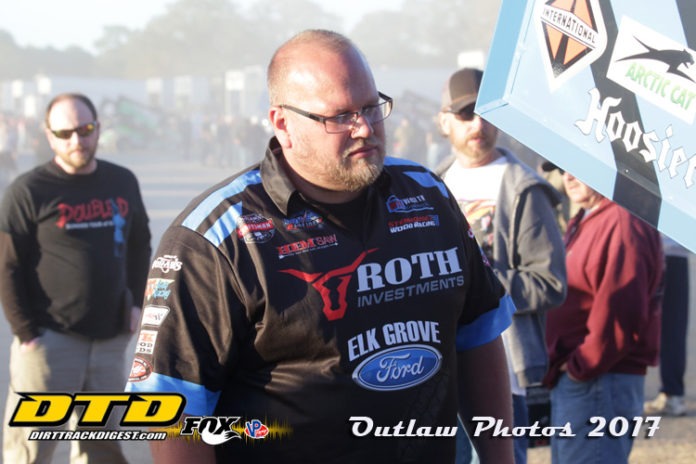 Racing fans around the Volusia Speedway Park and all over the Internet Nation were talking about Joey Saldana’s horrendous accident in which his World of Outlaw sprinter went flying out of the park on Wednesday night.

Saldana was running with the Arctic Cat All Star Circuit of Champions and when his car and that of Jason Johnson came together exiting turn two.

After the races blue and black body panels sat in a heap alongside the tow truck he hit that helped him come to a stop.

As the crumpled car was towed back to the pits the boom on the tow truck broke dropping the car to the ground.


So what was the next step?

Tyler Swank, crew-chief for the team talked to DTD about what the next steps were.

He said, “The car wasn’t as bad as it could have been. It got fence, some grass, a part of the grandstand and the tow truck, but J&J build one of the safest Sprint Cars in the country. It held up pretty well. The drop by the tow truck just damaged what had already been damaged.”

He pulled his team together and made a plan of attack.

Tyler explained, “We took parts off of it at the track, loaded it and went to the hotel where we blew it apart. We put it upstairs in the trailer and went to bed.”

Continuing he said, “We all got up early and were out at the car by 7 a.m. It is a kit car and we put it back together and had it finished by 12:30 p.m. This is where all the work you do during the winter comes into play. Everything was new. The accident had poked a hole in the pan so that was put aside.”

Swank said, “This car is a carbon copy of the car we wrecked last night.”

He was disappointed as the team has been coming together after action at Bubba Raceway Park and Volusia.

Saldana was fast on Wednesday night.

Swank said, “That car was crazy good. I don’t know if we could have passed Donny (Schatz), but I think we could have had something for him. Every night so far we have been making progress.”

Of the accident Joey Saldana said, “I didn’t feel a thing when it was happening. It just happened so fast. I’m okay.”

Swank wasn’t exactly happy over the situation that the team faced after Wednesday night’s show.

He said, “It irritates me when some guy usually drives through or over another driver on a consistent basis. It pissed me off.”

Continuing he said, “This was his (Johnson’s) first race and it means absolutely nothing as far as things go. It wasn’t exactly like he was racing for the championship at Knoxville.”

So it was back to action on Thursday and it wasn’t the night the team probably had hoped for.

He did qualify 11th in the 31 car field, but missed qualifying from his heat by one spot. He came back for the B-Main and won that by over 3.5 seconds before closing the night in 16th.

The team will return to action to kick off the Craftsman World of Outlaw Sprint season tonight at VSP.

Although it was a tough night, Swank is living a dream serving as the crew-chief for the Stenhouse Jr.-Wood Racing team.

He said, “I’m from Newton Iowa and my dad was a drag racer. We went to Knoxville and I loved it. I eventually helped out some local guys and things just happened. A year ago the team I was working for shut down after the Knoxville Nationals (Kerry Madsen’s team) and Joey and I got together. There had been other plans, but plans change.”

Regarding pressure Swank said, “We probably put more pressure on ourselves that our owners put on us. They like to say have fun.”

Saldana has 99 World of Outlaw wins and the anticipation is for another successful year for the Elk Grove Ford/Roth Investments sponsored team.

The team has already dealt with adversity this season, but Swank credits his crew with the determination and professionalism to get Saldana back on the track for Thursday night.