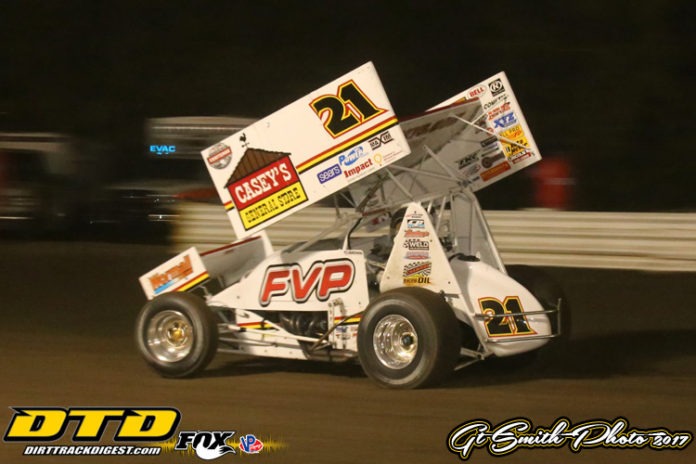 Brian Brown is one of those top drivers who isn’t out with the Craftsman World of Outlaws on a regular basis and he hasn’t been an “every year” competitor in Florida.  He pulled into Volusia Speedway Park for this year’s edition of the DIRTcar Nationals and has done quite well including a fast time and running with the leaders.

On the first night of the WoO season he ran second in his heat, third in the dash and after running most of the 30 lap main in second place he settled for fourth.

With just seven laps gone in the main he slapped the outside wall in turn two with his right rear and the contact seemed to be heavy enough where it could have caused his difficulty.

Afterwards, outside of his trailer, he said, “I was concerned a little bit about that hit, but the car continued to feel and run good.”


Continuing he said, “It was my fault. When you run with the World of Outlaws you have to put it on the edge every laps.”

He was disappointed as he felt he let second place out of his grasp. Brian explained, the the race with Christopher Bell and Brad Sweet was intense, but he noted, “I came up on a car and was indecisive. I waited too long to make a decision and a split second with these guys can cost you a lot.”

Volusia is a different animal than some tracks. It is a big, fast half-mile.