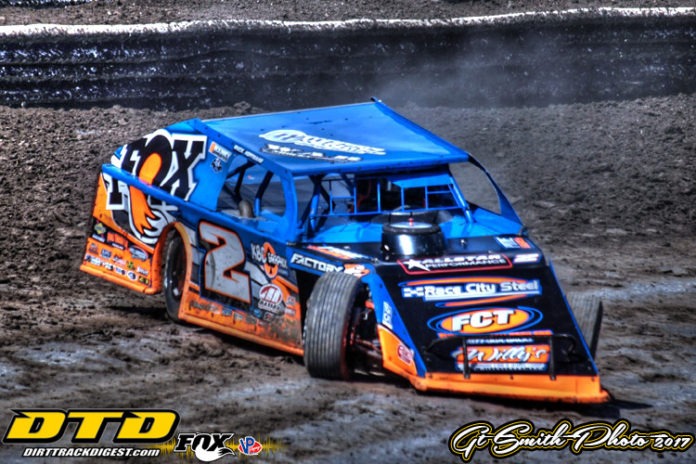 It’s another day, and just like two other days this week, Nick Hoffman left with the gator at the end of the race. The Mooresville, N.C., driver dominated Sunday afternoon’s 20-lap UMP Modified feature at the DIRTcar Nationals for his third gator. It was also the third time this week that he swept the night. He set fast-time, won his heat before capturing the feature.

On Sunday his win was aided by his pole starting position, but it probably wouldn’t have bene an issue as he went mostly unchallenged during the feature.  He led the race from start to finish.

“We’ve been good all week, even with little hiccups we had earlier in the week,” said Hoffman after his $700 victory. “The three the nights we won, they were perfect nights. We had quick time overall, won the heat race and won the feature. I had the luck of the draw there. I could have drew as bad as fourth, which ain’t too bad, but to start on the pole and just carry the race as far as momentum and set the pace is pretty big, especially here.”

He attributed the success he’s having this year to the past few years when he battled with Austin and Ty Dillion. Those hard fought battles made him improve his game.


“I think the biggest thing is just having to race against the Dillion brothers and competition like that the last few years,” commented Hoffman. “The last couple of years it’s been the Dillions and I going back and forth. Now, without them here, we still got our program together and going strong.”

Hoffman’s Fox Shocks sponsored No. 2 Elite Race Car has been dominant on the bottom of the speedway. He’s been able to do that for most of the week which has made winning even easier.

“We are building these cars with a lot of side bite for situations like that, especially when it gets slick like this,” commented Hoffman. “These bigger momentum race tracks you don’t need as much traction off the corner as long as you roll through the center of the corner way faster. I tried to run these races as much like a superspeedway as I can. I just try to keep as much roll speed through the center of the corners. I think that is where I beat a lot of these guys. A lot of them try to have roll speed on entry and they miss the center and end up with no traction up off.”

Hoffman elected to go with a softer tire compound Sunday even though, on paper, running a harder compound sounded like the better plan on the daytime surface. Although he got a little nervous late, it ended up being the right call.

“I’ve raced twice here before in the day time,” mentioned Hoffman. “The other night in the rubber I went with a softer tire. I kind of know how to save these things. Starting up front I knew I could control my own pace as long as I didn’t have someone pressuring me too hard. I could kind of save my right rear and save it for the end. I didn’t feel near as good at the end as I did the first 10 laps, but I still think it was the right choice for me.”

Hoffman now has a shot at winning his third big gator as the DIRTcar Nationals champion. Coming into Sunday afternoon’s show he sat third behind Brian Ruhlman and Jacob Hawkins after a poor showing on the opening night where he finished 12th. They’ll both compete on Sunday evening.

“It would be huge,” he said about winning another big gator. “Track conditions are going to be totally different. I think we are prepared for any kind. It going to take a strong 30-laps. You can’t make any mistakes and you have to make the right tire choice. There are so many situations that can go wrong and take you out of this deal. We are looking for more gators, then the points deal, but it will fall the way it’s going to fall. We’ll just hope for the best.”

So far, other than one hiccup, it’s been nothing but the best for Hoffman.