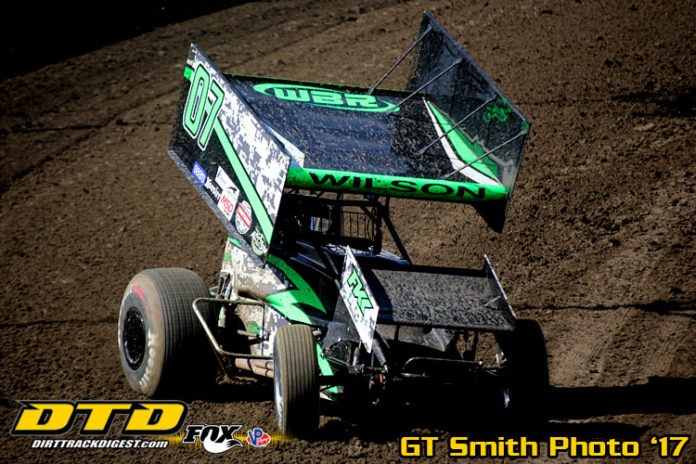 Friday might a Crawfordsville, Ind., driver who is attempting to make major strides in a racing career change had a tough night at Volusia at the World of Outlaws kicked off the season.

Jacob Wilson started at the tail end of heat number four and the next thing you knew he was flipping wildly through turn three and four. He had made impact entering the third and flipped several times before finally coming to rest nearly 50 yards from where the initial impact was made.

Fortunately he walked away, but the car was pretty well bent up.

After the main-event was completed fans wandering through the WoO pits saw a nearly bare chassis of the 07. Crew chief Clinton Wilson, brother of Jacob, was doing the bulk of the work.

Asked about being done for the weekend, he said, “We are trying to get it back together and we don’t think the frame is bent.”

Continuing, he noted, “We don’t think it got the engine, but it got everything else.”

Explaining what happened, Clinton said, “We really don’t know, but Jacob said that it seemed like something broke in the steering. We really can’t tell because the damage that was done while he flipped was too much to separate what broke when,”

The trip to Florida has been eventful as the crew chief said, “We hope the engine is okay as we lost our Mopar last night.”

Continuing he noted, “We did okay the first night of the All Stars at Bubba, but messed up the draw the next two nights and it was tough going.”

Jacob Wilson is new to the dirt track racing as he was a regular competitor on asphalt until last year. He has competed in a variety of racing events including the legendary Little 500 in Anderson, Ind.

Clinton noted, “Last year was our first year on dirt and we’ve done about 25 shows. We are looking to run many more this year. “

Determination and hard work in all of racing, but already the Jacob Wilson team is showing they are ready to fast the tough challenge that awaits them.

The car was back on the track for the rained out portion of the WoO second night and time trialed on Sunday afternoon as the team prepared to wrap up their second weekend in Florida.