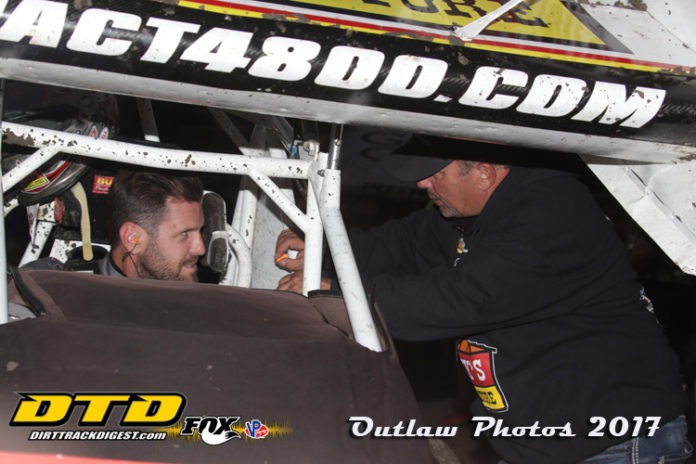 For 26 years Danny Lasoski has been a fixture at every major Sprint Car event.

Recent years have been successful as he noted, “We won four championships between NSL (National Sprint League) and Knoxville and a total of 27 races with that team.”

So it might be difficult to believe that as the 2017 season begins Danny Lasoski is in the Volusia Speedway Park pits without a ride.

He noted, “I have been helping my nephew (Brian Brown). He hasn’t been here in 10 years and I’ve raced here a lot. Volusia is one of my favorite two speedways and I really just want to try to help him.”


Lasoski, a “driver coach” here at Volusia said, “It is a big learning curve here, but it is a fast speedway. In fact it is the fastest speedway the we run.”

Brian Brown noted a couple of nights ago that, despite doing so well here, he was uncomfortable in the car.

Danny said, “I think the changes we made have made him much more comfortable. He’s been quick time three of the four nights out.”

The team suffered a set back on Sunday afternoon as a u-joint broke taking out the motor plate and went into the motor.

Lasoski hopes he can get back into a race car soon, but he knows that it isn’t as easy at it use to be.

He had hoped to be racing in Florida, but noted, “Nothing worked out. I parted ways with the team I ran for last year. It really wasn’t expected so I had nothing lined up for this year.”

Continuing he said, “You can’t believe how difficult it is not to be out there. It’s so hard that if I wasn’t helping Brian I wouldn’t be here. It’s just close to killing me. It’s tough.”

Times have changed and Lasoski explained, “It’s dog eat dog. It is basically what have you done for me lately. You can no longer simply show up looking for a ride with your helmet bag and seat. It just doesn’t work out that way anymore.”

Lasoski has all the parts to continue his illustrious career except for one thing.

Lasoski said, “I have a car, truck and trailer. I have everything except a motor. I hope I can partner up with someone. You have to have an engine program and you really need to be funded in order to do it the right way.”

Danny Lasoski has won throughout his 26 year career and in recent years showed he could continue to run in championship form.

It doesn’t seem right that Lasoski won at the Knoxville Speedway as well as all of the major Sprint Car events nationwide. He has shown he can still be not only a winner, but a champion, when it comes to racing.

Fans walking through the pits recognize him and inquire with concern, “Why aren’t you racing?”

Lasoski smiles, but it’s quite evident he is still has that burning desire to be out there racing, not only against his nephew, but the other stars of the World of Outlaws, All Stars and Knoxville.