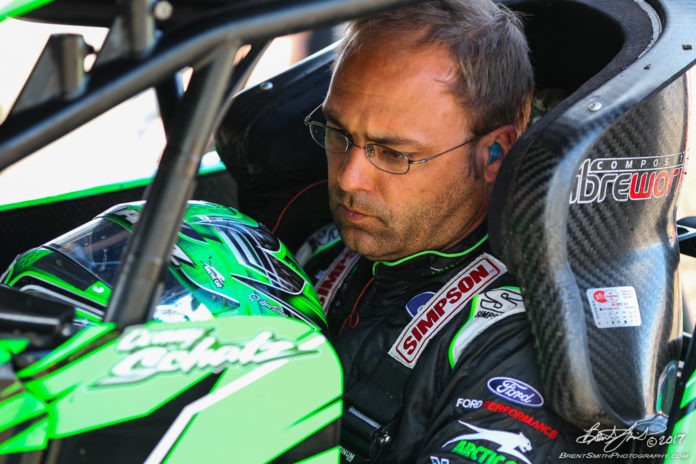 If you didn’t already know this, it’s Donny Schatz’s world and the rest of us are just living in it.  Schatz once again proved why he is the greatest Sprint Car driver in the country. The eight-time and defending World of Outlaw Series champion came from 17th in Sunday night’s DIRTcar Nationals 30-lap A-Main finale to pick up his second win of the day and the 17th of his career at Volusia Speedway Park. He was quick to credit his bad finish on Friday night for the sweep of the Sunday programs.

“I would have liked to done that a couple nights ago but I just wasn’t good enough,” stated Schatz in reference to Friday night when he finished 14th. “When it comes to nights like that, we were terrible but we learned what not to do with our race cars that helped us have that tonight. When this place is right you can make a groove work that nobody else can and you do those sort of things. It takes these three guys that beat each other up quite a bit to do that. They do an incredible job. No one wants to qualify bad with the format, everything is straight up, so it’s so important. They just proved you don’t have to start up front. It’s good to have that performance this early in the year.”

Schatz battled for his $10,000 paycheck on Sunday night. He got to second with a handful laps to go but struggled to get by Joey Saldana. Saldana was in his line on the bottom. Luckily for Schatz, David Gravel was hung up in traffic as well which allowed him to close back once he got back on the bottom. He then made his move on lap 29 for the lead. From there, it was over.

“I didn’t have a choice because Joey (Saldana) was on the bottom and he wasn’t wanting to move out of the way,” said Schatz. “I had to try and do something to get by him. I really didn’t expect him to run the bottom the way he was. He normally hits it for a lap or two then makes some mistakes. I had to do something to get around him. Once I did I was able to get to the bottom and run David (Gravel) back down. David didn’t know where to go. His road map was in the infield. That is the way it works. Sometimes out front you are sitting a duck. With the way the race track was you really didn’t know what to expect next.”


Schatz also won the make-up program on Sunday afternoon after rain postponed Saturday night’s racing action. His sweep gave him five wins in Florida. He scored three All-Star Circuit of Champions victories (two at Bubba and one at Volusia), two Outlaw wins to go along with a second at Bubba Raceway Park and that 14th place effort.

“We’ve won three races in five at Volusia, had one second, a 14th and we had two wins and a second at Ocala, but we didn’t win the gator,” commented Schatz. “I guess that is the way it goes. I’m not really worried about it. At the end of the day these guys, they are all about the paycheck that comes along with it. We’ll do our best just to keep trying to win races.”

By charging from back Schatz joined elite coompany in becoming only the third driver to win two World of Outlaw races in the same day. Jeff and Sammy Swindell are the only other two drivers to accomplish the feat.

“This is really cool,” mentioned Schatz. “Jeff (Swindell) is a person that helped me a lot in my younger days and he’s still here today doing the bleeder stuff. We work with him closely. He has a cutting edge product that helps us win these races. He still has a passion for the sport and to be able do something he did, he was the first there to congratulate me, that’s really cool. I’m proud to be in that club with him.”

Not that his team needed it, but Schatz and company won’t be short on confidence when they leave the Sunshine State. If it’s any indication of how the season is going to go, it’s going to be a long year for the rest of the tour travelers with the World of Outlaws. Schatz though doesn’t put too much into the hot start.

“You never gauge anything off of Florida,” he commented. “We’ve come here in the past and been terrible and we’ve left here and been the best car all season long. We’ve also done the opposite. We’ve come here and been good then left here and were terrible. You can’t gauge the things that you do here, this is the only place in the country that is like this. Bubba that is a little different story, we go to a lot of unique places. To be able get on a big track like this and get rolling around well, that’s great. It gives some confidence, but it isn’t like these guys lack confidence. We beat each other up to get it perfect. We strive to have the car perfect every night.”

Now that the Sprint Car portion of the DIRTcar Nationals is complete, Schatz attention turns to the Late Model. He’ll look to have a bit of fun before heading out west for the next events for the Sprint Cars.

“We’ve got six nights of the Late Model,” Schatz said. “I’m ready to enjoy a little fun racing here. I don’t know what my expectations are with it. I’m like a duck out of water. I have a lot of fun and I get to be around a lot of great people. The expectations aren’t quite like this. We are going to go have a good time and whatever happens, happens.”