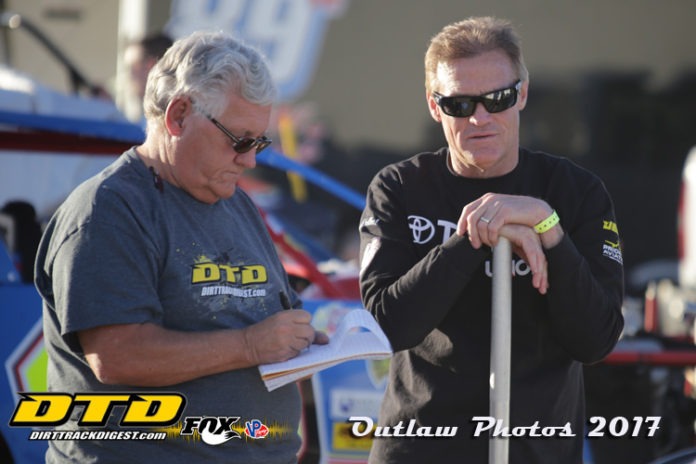 Kenny Wallace is set to go for the Gator Nationals tonight when UMP Mods take the track for their richest night of the week.

Last night that treasured top ten qualifying spot to earn a guaranteed berth in tonight’s even almost escaped him. He said, “I got in a tangle at the start of the heat race and nearly flipped the car. I nearly tore off the entire side of the car, the front end and the toe was out.”

He had gone over another car as he attempted to work to the inside at the green.

Continuing he said, “It was hairy in lapped traffic out there tonight, but you can’t never slow up out there.”


He is a guaranteed starter for the big one at Volusia Speedway Park and is joined by top notch UMP Modified drivers from around the country (and even one from British Columbia).

For veteran race fans it might seem strange seeing the former asphalt competitor on dirt. He raced on asphalt his entire career which spanned American Speed Association and NASCAR, but he has redefined himself.

Racing, he says, “Is my hunting and fishing.”

Looking back when leaving asphalt racing, he explained, “I wasn’t ready to shut down I am lucky that Fox Sports liked me and that gives me the ability to race and to do something I love to do. And I love racing on dirt.”

Dirt racing is “the most fun thing I’ve ever done,” said Kenny.

Continuing he said, “NASCAR is a dream of every racer and it was my dream, but it was brutal. It is so hard.”

He likes dirt racing because the race drivers want to do well and in NASCAR you had to wait a week. Kenny explained, “On dirt if you don’t do so well one night you have the next night. You get a do over and can redeem yourself. That’s why I like dirt racing so much.”

Wallace provided a perfect example of his theory. “One night we ran a track in Illinois and I finished 18th place and the next night at another track up in Spoon River, Illinois I raced against basically the same guys and won the $5,000 feature. I got a do over.”

Despite racing asphalt he always appeared to have an itch to drive a dirt car.

Reflecting, Kenny said, “I started on asphalt, but I knew a lot of racers like A.J. Foyt, Mario (Andretti) and others would would run the Indy 500 and then that night head to the Sprint Car race at Terre Haute. They were multi-talented and not one dimensional. They looked so bad ass with that bandana across their mouth. I wanted to do that someday.”

He’s raced all over the world with stops in Japan and Canada. Last year he even did some Stadium truck racing. He’s run the Chili Bowl and he simply loves being behind the wheel of a car.

Kenny Wallace is based in his home state of Missouri in the St. Louis area, but he made the trip (and always makes the trip) for the eight day UMP spectacular at Volusia.

The cars are different as he said, “They have a lot of horsepower, 700 to 800, but the tires are very narrow at eight inches. You have to control these cars with the throttle or you can really spin the tires. You have to keep the car under you,” said Wallace.

Hopping into a dirt car wasn’t exactly an easy adjustment. Kenny said, “I had to learn how not to drive out of control and Kenny Schrader taught me well. I thought dirt drivers just drove crazy, but it all about a controlled slide.”

This trip is more than worthwhile for the team.

Wallace explained, “I love Volusia. We left St. Louis on February 9 and have run many races before the final days here. We ran North Florida Speedway on the third, fourth and fifth; East Bay on the eighth, ninth, tenth and eleventh and back to North Florida on the twelfth before coming here for the week. This is great for me, but there are so many midweek shows.”

Continuing he said, “It is hard for me to race on Friday and Saturday because of working for Fox Sports, but due to my job I work weekends and have all the rest of the days of the week to go racing.”

He enjoys the talent that makes the haul to Florida this time of year and winning a Gator is the ultimate goal.

It’s funny but despite his racing history Kenny Wallace started out as something totally different. He said, “I came down here as a fabricator and at an early age in 1984 was the crew chief for the Levi Garrett team and Joe Ruttman. “

How much longer will he do it?

Well, Kenny has a plan as he said, “I will shut it down at 58. I will turn 58 in August in four years. It would be nice to travel with my grand baby and wife. I have done all sorts of research and you could basically be over at 58. I think you can run after that age, but I just don’t think you can win consistently.”

He’s seen racing evolve over the decades that he has been in the sport. Kenny said, “It has evolved. It is an 800 million dollar sport. It’s harder now with bigger money. A driver can’t embarrass a sponsor and there is a social shift. With social media you do one thing and suddenly it is all over social media.”

The sport is also evolving as Wallace explained, “There is a societal shift. You look at tracks that use to have 2,000 fans a week and now they get 600. NASCAR needed to reinvent itself and it is attempting to do so.”

It would appear that local short tracks also need to start examining the impact of the changing culture to remain relevant.

Wallace is a true ambassador to the sport of auto racing. He sees the positives and expresses his opinions thoughtfully about the sport that has given him the life he so much enjoys.

The UMP Modifieds are winding down their stay at Volusia Speedway Park, but for Wallace there is that thrill of being behind the wheel and racing against the best in his class.

There is no disappointment of running these rural short tracks after years of being in the spotlight on the much bigger Broadway stage.

He is a contributor to the sport and even when he departs racing in four years you have to get a feeling that he won’t disappear.