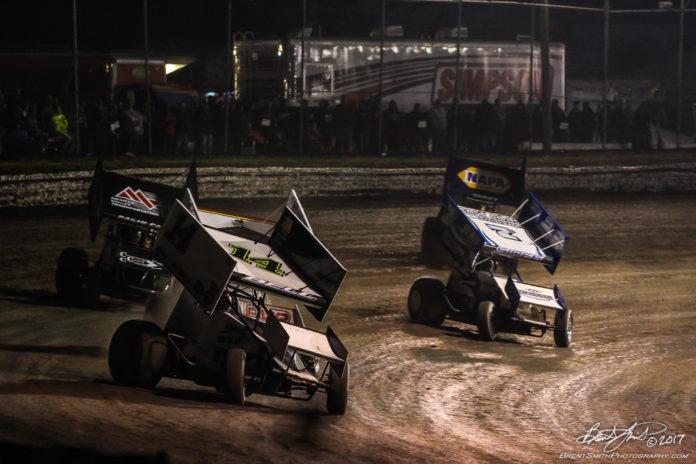 Sadly, the final night of Sprint Car racing at Volusia Speedway Park provided a sad situation with the accident that injured three fans.

With emergency personnel caring for the injured and the World of Outlaw drivers parked around the speedway the night took on a totally different feeling.

The race became secondary with the concern for the fans, drivers involved and safety personnel treating the injured taking priority.

It was a potentially tragic situation that resulted in three persons injured, two of them seriously, but for the grace of God it could have been much, much worse.


The racing community sent our a prayer request and drivers, owners and fans responded accordingly.

It is a part of the sport that none of us like, but it happens and as race fans we either accept it or walk away.

Our sport isn’t perfect. There are moments that we don’t want others to see. The stark reality is that last night the racing turned from an entertainment to a news story.

There were critics in our sport who are quick to blast the news media for coverage. However, last night as I sat in the press box I became embarrassed for some race fans and “news” outlets.

We were our own worst enemy. Tweets, videos and other forms of social media poured out in a viral nature. In fact the video was posted as emergency crews were working on saving lives. No one knew if this was a fatality, but it didn’t stop our own people from exploding the information over the media.

I was at the track and didn’t know for quite some time how many were hurt.

This was such a strange situation that even announcer Johnny Gibson thought only two cars, Rico Abreu and Dale Blaney, had flipped and he said the drivers were okay. However, I was sitting in turn one at the time of the crash and I swore I saw three cars go over. It wasn’t until I got to the press box that we figured out there was an upside down Jason Sides high in turn two.

I saw what happened, but I think it happened so quickly my brain really didn’t process all that I was seeing.

There were two media organizations in the tower covering this race and both took the high road…the professional road.

News was published as it was learned what the facts were. I had been in news for years and being first wasn’t always the way I worked. I wanted to be the first with the correct news. Last night that wasn’t the case on social media.

Accusations flew, clicks soared and facts weren’t being taken into the process.

It was a sad night as no one wants to see drivers or fans injured.

The race went on and despite thoughts being with the injured the drivers overcame what their counterparts had been involved with and put on one heck of a race.

Donny Schatz was spectacular sweeping the day-night twinbill. He started 17th and broke David Gravel’s heart with a lap and a half to go. Gravel got the Gator as the Sprint champion, but he had lost four engines this week and got a trophy. I don’t think he was happy.

When it was over last night I didn’-t wander the pits to talk with drivers. I just felt they probably weren’t in the mood and neither was I.

I will catch up on other tidbits in follow up columns as you can probably understand I really am not in the mood today to write. It was a tough night for all last night and my prayers and thoughts go out to all.

Sorry so short, but any comments, news or stuff send to foley395@hotmail.com