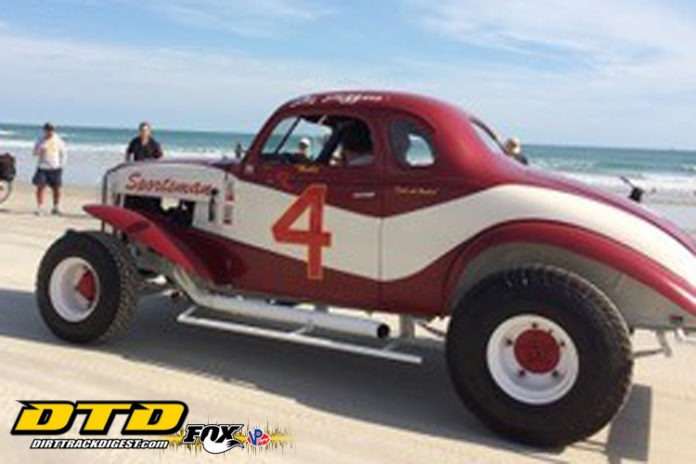 Speed Weeks is here in Daytona Beach and we are now filling our days with the many extra racing activities plus the Big Block Modified Series that starts Wednesday, February 22nd and runs through February 25th at DIRTcar Nationals at Volusia Speedway. Many of our northern readers come south each year to follow the Big Block Modifieds at Volusia Speedway just 25 miles west of Daytona Beach and the Daytona International Speedway. And many of course try to take in both. This year the many Stewart Friesen fans will get a chance to do both when he takes to the D.I.S. in the Camping World Truck Series to begin a full season of running the truck series. Stewart will also run a Modified at Volusia during Speed Weeks on the nights he is not in the truck. Saturday we made our way down A1A to the North Turn Restaurant for the annual Beach Road Course Parade of historic cars and their drivers. Included in the parade this year was one very famous maroon and white No. 4 of Lou Lazzaro brought down to Daytona Beach by his son, Lou, Jr., and his grandson, Lou, III from Atlanta, Georgia. The car is the street replica of Lou’s famous No. 4 coupe that the two have been busy creating the past few years. Lou, Jr. was in Daytona to participate in many of the nostalgia laden events coming up this week. The car drew many fans at the staging area particularly those from the Northeast. Some of the people that stopped by were familiar with Lazzaro’s car even though they had not been to the races in years. One particular fan that we ran into before the parade began was Richard Flanigan a long time race fan of the Lazzaro era and former N.Y.S.S.C.A. (New York State Stock Car Association) Board of Director’s member. After the parade we found Lou, Jr. talking with Mike Budka, Jr. as they looked through photo albums of Lazzaro’s career on dirt and asphalt. Budka is currently running a 1/4 mile dirt track in North Carolina; a track that he re-opened after it had been closed for 18 years. Mountain View Speedway is located in Boone, NC on the High County Fairgrounds approximately 35 miles north of the former North Wilkesboro Speedway.

Another parade attendee interested in the No. 4 Coupe and the photo albums was Dr. Dick Berggren. Berggren has devoted much time to preserving the history of auto racing in the Northeast and is the President of the Racing History Preservation Group that runs the North East Motorsports History museum on the grounds of the New Hampshire Motor Speedway.
Back Home in the Northeast:


Jim Becker and J&J Racing of Middleburgh are nearly ready to go racing for the upcoming season. The team has the 2016 Bicknell chassis ready just waiting for the engine to return from Precision Engine for power. Back up car is also ready. Plans are to race Glen Ridge but if that doesn’t work out, their plans are to go to Afton Raceway on Friday nights this season. Back on board as a sponsor this season is Four Star Realty Group.

According to his FaceBook page, Schoharie native Ivan Joslin will be back in a Pro Stock full time this coming season. Ivan will be competing at Albany Saratoga for his first full time season and will also be back at Fonda. He will also follow the King of Dirt (KOD) Pro Stock Series. Sponsors on Ivan’s Pro Stock for 2017 are Owens Corning, Bellevue Builders Supply, Cindy Steele (Hornlady Motorsports), Lenny’s Tire Service LLC, Steve and Linda Vanyo, Parks Electric (Bryan Parks), Liggetts Auto & Towing (Brittany Liggett), Scentsy (Kyle Joslin), Barts Home Improvement (Tracy Barton), and William Billings. And as always Ivan especially thanks his family and crew.

We thank those that send us their information on upcoming events. Until next week please send all news/and or comments to biittig@yahoo.com