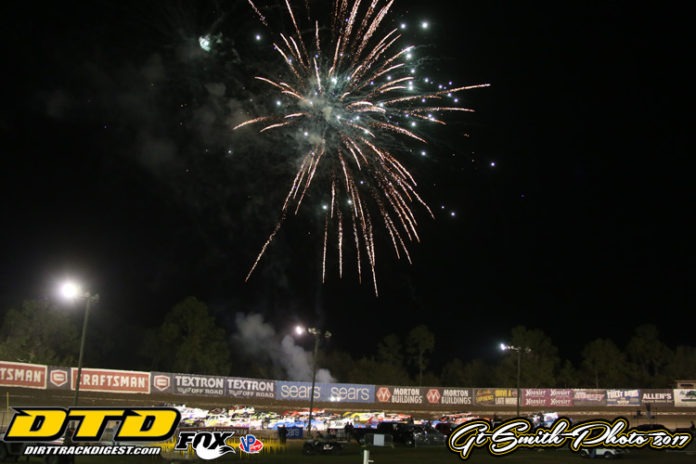 Chris Madden continued his hot start to the season as he took top honors in the 30-lap DIRTcar Late Model feature on Monday night. The Gaffney, S.C., driver earned a quick $7,000 in beating Brian Shirley and Tyler Erb. It’s Madden’s second win of the 2017 season as he also beat the field on Saturday night at the Screven Motorsports Complex in World of Outlaws action.

“It’s a great start to the year,” mentioned Madden. “We started out last year really good but we got hurt there and had to take a few months then we came back strong and kind of picked up right where we left off. I’m excited to be back racing.”

Madden’s win came on opening night of the DIRTcar Nationals for the Late Models. From here the teams compete in five more nights of racing with the final three events part of the World of Outlaws national tour schedule.  The win allows Madden to keep the momentum on his side.

“It’s pretty a good deal,” he said. “We’ve won here in the past so it feels pretty good to win here again.”

Nick Hoffman got himself another big gator on Monday night. Hoffman blasted by Jacob Hawkins on lap 21 to earn the biggest payday of the week for the Modifieds. He earned $5,000 for the win.

“It’s awesome to have six of the seven cars in the show,” stated Hoffman. “To have Will (Krup) run as strong as he did. This is a long time coming for him. He’s had some rough luck here, blown motors, wrecks last year that were no fault of his own. It says a lot of to put these cars up here on the podium. We’ll keep digging.”

Krup got his own gator earlier in the week with his Elite Chassis to go along with the third in the Gator Championship. The whole group has been sharing notes to figure out the best way around Volusia Speedway Park. Right now whatever they are doing is working as they’ve been the strongest cars all week.

“We are all pretty close,” stated Krup about the Elite group. “Nick (Hoffman) obviously is the mastermind behind everything. He’ll go out there and find out what works or vice versa. He always stays right there and tries to make these cars better.”

43 Late Models signed in for action on Monday night. That number should increase as the week progresses as there are well over 50 cars in the pit area…

New Yorker Tim McCreadie qualified for the feature only to exit the track prior to the conclusion. He finished 19th…

Chub Frank looked strong early in the night by winning a heat race. His fortunes changed during the feature as he suffered a right rear flat. The tire was changed but he ended up calling it a night early as well to finish 21st…

Donny Schatz failed to qualify for his first feature of the week at Volusia. Schatz dominated Sprint Car action at the speedway but came up a few spots short in the B-Main of making the show…

Hoffman and Brian Ruhlman pulled double-duty on the night running both the UMP Modifieds and the Late Models. They were both locked into the UMP main but they each failed to qualify for the Late Model feature.

Tuesday night is the final night for the UMP Modifieds with the Late Models also on the schedule.  The big-block Modifieds have several practice sessions scheduled before they take to the track on Wednesday night.