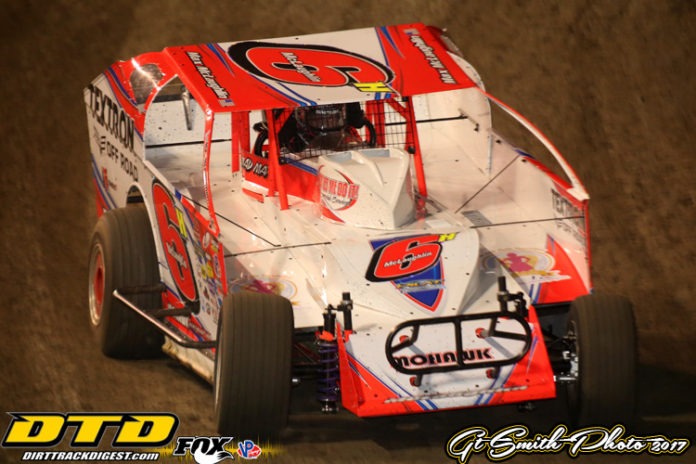 Max McLaughlin and Matt Hearn made their official debut on Tuesday night during hot laps for the Super DIRTcar Series Big-Block Modfiieds at the Volusia Speedway Park. The results for McLaughlin were immediate. McLaughlin timed in quick in all three sessions. He was second quick in the first session, sixth quick in the second before going tenth quick in the final set of hot laps.

“We are unloaded second fast overall, then ran sixth fastest in second session overall,” cited McLaughlin. “We could have been up there again but I wanted to try the bottom because that’s probably where we are going to end up at the end of the race. I chose to not have a faster time. I just wanted to learn something down there on the bottom and we did.”

McLaughlin is looking forward to the opportunity to compete with Hearn turning the wrenches on the car. He believes having Hearn in his corner should help take the team to another level. Hearn has shown success with the likes of his uncle Brett as well as Stewart Friesen.

“Matt is super smart and he brings a lot to our team,” said McLaughlin. “I think that is what we were missing last year. Kurt (Wiegel) and everyone at HBR are a great help and super smart guys, but when you are at the race track and you are a three car team, you are busy with your own car. You don’t have to go help each other. You are thrashing. With the series going so fast that’s just how it is. To have Matt over focusing on our car is huge for us.”


Tuesday night was the first time that the Mooresville, N.C., driver has turned laps at Volusia Speedway in a Big-Block Modified and it’s also his first time in a Teo. Even though its several first, McLaughlin still has high expectations for the team. They want to win.

“This Teo car is real fast,” mentioned McLaughlin. “I’m really happy with it the first time out. We’ll see what we can this week, but our expectations are to win and that’s what we are going to try and do.”

Unfortunately McLaughlin will have to wait an extra day to see what they can do on the track as Mother Nature has taken care of the Wednesday night program.