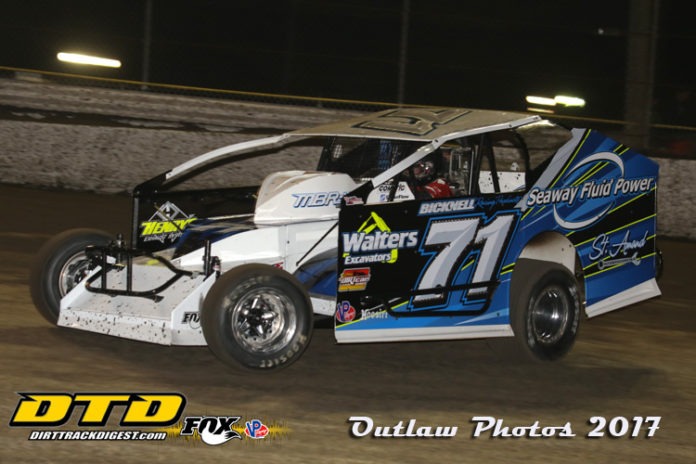 St. Catherines, Ont., driver Mike Bowman is ready to make his first ever start at the Volusia Speedway Park. The Merrittville Speedway regular has never made the trip to race in the Sunshine State until this year. It was something he’s always wanted to do.

“It’s a bucket list thing,” commented Bowman. “Right now I’m not married, I have no kids and the money was there so I figured I better check it off the list.”

Bowman improved each time he hit the track on Tuesday night for practice. The team worked to make improvements on his No. 71 as he continued to learn the race track. The track races a little different than tracks at home.

“The hardest thing is trusting the car because the entry speed is so fast,” said Bowman. “The corners, I swear they make up two thirds of the speedway. It’s just like any place you’ve never laid eyes on. It’s tough to get up to speed and this is a tough crowd to do it in.”


With his first trip to Volusia, Bowman has realistic goals for each night. He hopes to make the show while ending up somewhere in the top ten in points when everything concludes on Saturday night.

“If we can end up top ten in points for the week, that’s a goal for me,” stated Bowman. “I want to make the feature every night so I can make it on DirtVision so everyone at home can watch.”

Looking ahead for the season, fans can expect to see Bowman at his traditional stops. He’ll be competing weekly at Merrittville Speedway while hitting the road for various other events like the DIRTcar Nationals.

“We are going to make a run for the elusive Modified championship at Merrittville,” mentioned Bowman. “We’ll hit and miss shows with this (Big-Block) and other Small-block shows. We’ll run the Ohsweken big-block race, every heads up show at Ransomville and we’ll get over to Freedom maybe. We’ll probably return to defend our Steel City Stampede win at Lernerville (Speedway).”