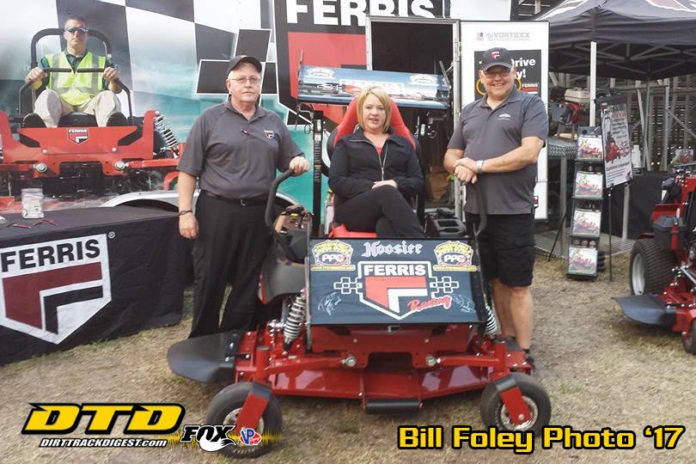 Huge red race seat, big black tail wing and a smaller one up front for downforce and a bit of stagger.

Okay, so that is a basic sprint car?

The midway area of Volusia Speedway Park is packed with State Fair type foods that are to be enjoyed, but there are also numerous commercial vendors like Arctic Cat, die-cast sales (Ray’s Racing Collectibles) folks and for the first time Ferris Mowers has debuted its product in the Sunshine State.


A rather substantial exhibit of Ferris Mowers products fill a good size area of the midway and if you have the chance to stop by take time and visit because there is a unique looking mower parked right out front.

Al Latta, a distributor from he northern part of Ohio decided he wanted to be creative.

He along with Ferris Mowers Bill Shea say that race track exposure generates a considerable business for the company and dealers.

This “racing mower” generates a bit of interest and Al proudly talked of his creation.

He said, “It is an IS3200 and it is new this year. I have built four of these previously. Everyone is a little more advanced.”

One of the major additions is “a new red racing seat donated by Bill Shea. I didn’t know if I would like it, but I really do.”

The racing mower is a popular attraction in Northwestern Ohio.

Al said, “I take it to all sorts of special events and we might take 200 to 300 pictures a day with fans on it. It is one of the draws at the events we go to.”

Continuing he said, “It’s fast, but not that fast as it has pretty little tires on it.”

He did say he has had a crash with it. Al explained, “We were at Eldora on the Dream Weekend and I hit the fence with it last year. I tried to do a burnout, but got stuck up high, caught a rut and put it into the fence. The announcer had a great time with that.”

Latta noted, “This is something I just like to do. I like to build and it is a conversation piece where ever we go.”

Al has received support from several drivers and is involved with 360 Sprints and 410’s along with other classes and the tractor pull circuit.

Promotion is one of the keys to business and Latta feels that this is a worthwhile effort.

He said, “It is amazing the impact that racing has on our business. In fact, this is the first year we’ve come to Florida and I feel we area making a strong impression already. We are not really known down here, but this is already helping to build awareness about Ferris Mowers. We’ve already set up a demonstration in St. Augustine.”

Latta loves what he is doing as he has been involved in this type of business for decades.

He realizes his racing mower attracts interest and attention in spreading the brand name and you can tell by visiting him for a few moments how much he enjoys the people who stop and take time to inquire about what he is doing at Volusia Speedway Park.