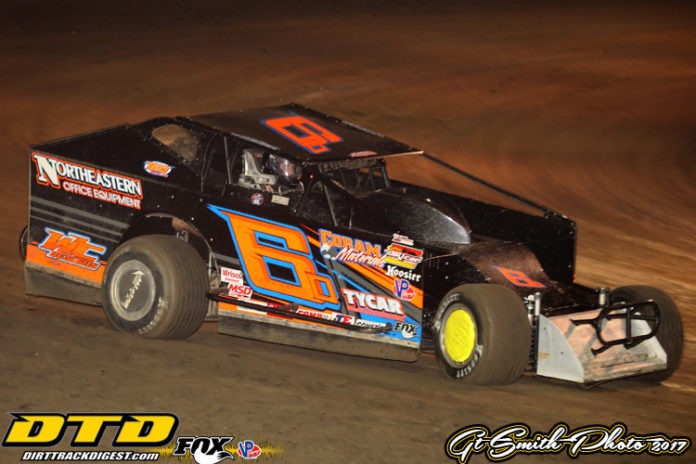 2017 seems to be the year of first-timers at the Volusia Speedway Park for the DIRTcar Nationals. There are several veteran drivers that have made the trip south for the first time. They are joined by one youngster who is making his first ever start in a Big-Block Modified.

14-year-old driver Dillon Steuer made the trek to Volusia to make his debut in the Big-Blocks. The Bohemia, N.Y., youngster has experience and wins in several other divisions including asphalt crate Modifieds at Riverhead Raceway in Long Island. He also made limited starts on the dirt in the Small-Block Modified ranks at various tracks with a start at the Orange County Fair Speedway during Eastern States. Now he’ll attempt to qualify for action at Volusia.

“We always come down here to watch,” commented Steuer from the Volusia pit area. “This year we decided to come down and race.”

Tuesday night Steuer turned his first laps around the “World’s Fastest Half-Mile” in his Performance Engines by Billy The Kid powered Teo. During his first two sessions he timed in just past the midway portions of all the cars in attendance as he tried to learn the track.


“It’s really fast,” he said. “It’s the fastest I’ve went so far. I just was trying to learn the track a little bit. We can build on that tomorrow.”

Unfortunately Mother Nature rained out the next two nights of action meaning that Steuer and everyone else has to wait to get back on track for what looks like two nights of racing now that the rain has moved out of Florida.

Once racing concludes in the Sunshine State, Steuer will return home to await the start of the season at the Riverhead Raceway while also mixing in some dirt racing when it fits the schedule.

“We going to run Riverhead on Long Island with the Tour Type Modified,” cited Steuer. “We are going to do more small-block than big-block. We aren’t going to do one specific track. We are just going to go wherever we can when we have time.”

Racing is scheduled to resume tonight at the DIRTcar Nationals at 7:30pm. Steuer will be in action with the Super DIRTcar Series Big-Block Modifieds. Joining them on the schedule is the World of Outlaws Late Models.