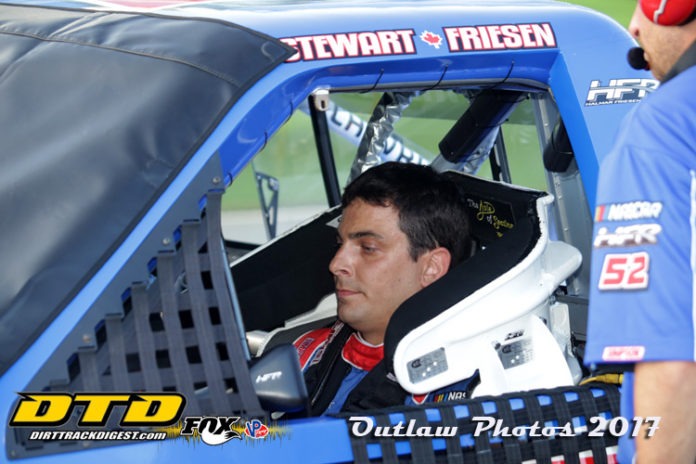 Friday night’s outcome in the Camping World Truck Series NextEra Energy Resources 250 wasn’t what Stewart Friesen was hoping for in his first ever race at the Daytona International Speedway. The Sprakers, N.Y., driver watched his hopes go by the wayside on a crash on the opening lap of the feature which relegated him to a 31st place finish.

“It was really unfortunate,” said Friesen from the Volusia Speedway Park pit area on Saturday afternoon. “We put a lot of time into those trucks to race at Daytona to then have the wind blown out of our sails the first lap. That sucked. It was bad day at the races.”

Friesen was still obviously disappointed about how things transpired at Daytona for his Halmar-Friesen Racing team, but that’s racing. Like he’s done so many times in his Modified career, he’s already looking forward to the next race on the schedule with the truck series.

“We are on to the next one,” said Friesen. “I’m lucky and happy to be going to Atlanta (Motor Speedway) next week to get another one under our belt. I’m excited about that. You can’t dwell on it now. We got to lick our wounds a little bit and go on to the next. We are looking forward to it. We tested at Atlanta and we had a good truck there.”


As for the truck Friesen was driving, that might take some time to repair.

“It’s tore it up pretty good,” mentioned Friesen. “It got the front clip, crushed the headers. It got it good. It doesn’t look like it’s that severe but the hits are pretty hard at Daytona.”

The result was unfortunate, but he’s proven time and again in his career that he is adapt at overcoming adversity. A bad finish isn’t what they were looking for, but eventually, he’ll get things on the right track. He’s hoping that starts next week at Atlanta.