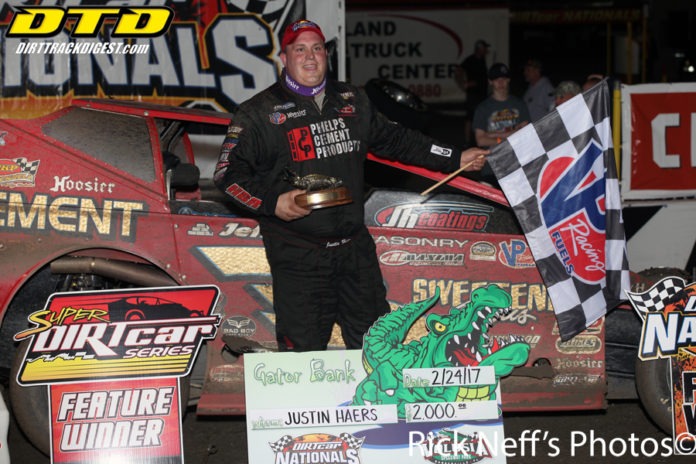 Justin Haers left the World Finals last November on a high. The Phelps, N.Y., driver left Charlotte with a pair of podium finishes. He had a second and a third place run to his credit. So far that momentum has carried right over to 2017 at Volusia Speedway Park as he picked up the victory in Friday night’s DIRTcar Nationals 30-lap Super DIRTcar Series opener.

“This is the same car,” he said in comparing last year to this year. “It is the same combination we had at the end of last year. I got two cars here that were really fast in practice. I’m real excited. This is what we come down here to do. We come down to win these big shows. I don’t run 80 races a year, I run about 30 races and I want to come to them and run good. That’s what we do.”

Haers was quick to credit his crew for their dedication during the off-season. They gave up their weekends to make sure the team didn’t skip a beat after ending the season the way they did. They came fully prepared to Volusia and it showed.

“This is because of my guys,” cited Haers. “I run a business and I’m gone a lot. These guys that help me out are so dedicated. Todd (Kirkwood), Jody (Stetzel), Beaver (Jim Davies), they worked every Saturday on the car from when Charlotte ended until they came down here. I told them when we were coming down here that if we unload like we did in Charlotte we would be good. They put in a ton of work and they don’t get the recognition that I do. I’m telling you they work so hard for me.”


Haers had to use his Bicknell to hold off someone he knows very well in good friend Matt Sheppard. Sheppard and Haers battled each week the last several seasons at Canandaigua Motorsports Park.  Last year Sheppard stole one late from Haers at the World Finals.  He was determined to make sure that didn’t happen again as the race went under caution with only three circuits remaining.

“Matt is a great competitor,” commented Haers. “We are really good friends. When that yellow came out and he was second I was flipping him off out my door because he got me there at Charlotte when we were leading, but it’s all good. We race against him every week. He’s a great competitor, really smart with these cars. It was good to get this win against him.”

Haers had a great battle with Jimmy Horton during the final third of the race. He battled door-to-door before backing off once he began to see heavy smoke coming out of Horton’s car. It ended up being a broken oil line on Horton’s car but at the time Haers wasn’t sure so he gave him space.

“At one point I was all over Jimmy (Horton), but then I smelled something,” mentioned Haers. “I didn’t know if it was my car or his car. When he started smoking I thought I was going to pounce on him and go by. Then I figured I’d just let him blow up, but he kept running and the motor kept going. We just road around the bottom there until he blew up. Then we went back to top where I felt more comfortable in one and two and stayed on the bottom in three and four. The car was good, the combination was good.”

It was Haers second career gator with his last coming in 2014. By virtue of his heat race win and feature win, Haers now goes into Saturday night as the favorite for the big gator trophy as the DIRTcar Nationals champion for the Super DIRTcar Series Modifieds. If he can run like he did on Friday, he’s going to be tough to beat.