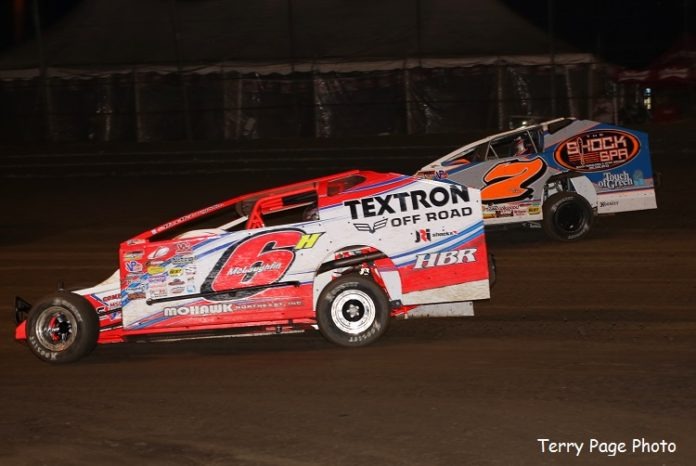 Max McLaughlin finished third Friday night in Super DIRTcar Series competition.  It was his best career finish against the stars of the series.  The Mooresville, N.C., driver battled for much of the race before finally moving his way back into third just before the checkered flag.

“It’s cool to be on the podium,” said McLaughlin. “Last year we struggled really bad. To start of the year at the first Super DIRTcar Series race to end up third is huge for us.”

During his Victory Lane interview, McLaughlin stated that he made the wrong call on a setup decision. That decision forced him to alter his plans on how to attack the track with is Teo Pro Car. Afterwards he elaborated on the decision.

“I didn’t put enough stagger in the car,” cited McLaughlin. “We were pretty tight out there. That hurt us early in the race. I kind of found a groove that I could carry a lot more speed through the center. I could get a good run there. The problem was if someone was on the outside I was going to nail them. The only way I could run that line is if no one was up there.”


McLaughlin made his move in the final three laps. The top lane opened up like he needed it to and he went to the front.

“The last couple laps of the race I went to the outside,” he said.  “I think we went from seventh to third in last three laps.  That is a pretty good run for us.  To start out the year that way is good.”

With a career best now in the books, McLaughlin hopes for more on Saturday.

“We are going to go at it again tomorrow and hopefully we end up in Victory Lane.”