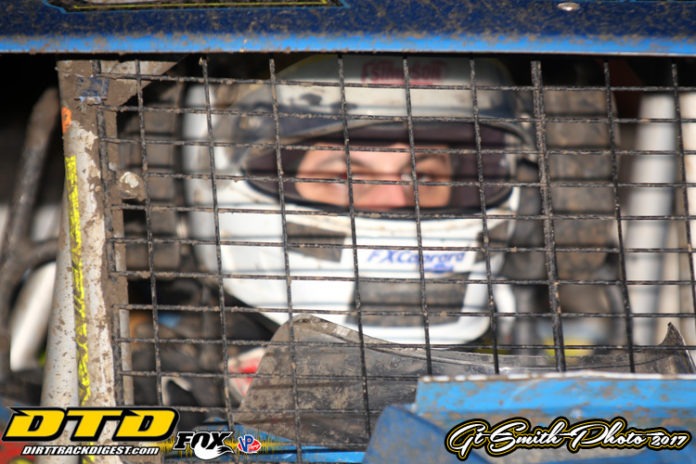 Qualifying didn’t go so well for several top drivers, but by the end of the night things turned around. Matt Sheppard started 22nd before finishing in position two. Larry Wight came from the 21st spot to finish fourth while Erick Rudolph drove from 18th to finish in fifth. All three were able to salvage respectable finishes after tough time trialing efforts.

Of the three, Sheppard had the most ground to make up and he did. Sheppard came up through the field to get to second. He even challenged Justin Haers for the victory before ultimately earning the second best spot on the podium. He utilized the bottom to work his way up to the front then tried to make a couple moves for the lead late that didn’t pay off.

“I had one shot on the restart,” commented Sheppard. “I thought he (Haers) was going to cut to the bottom getting into one so I cut across to the top and he went to the top. I might have had a shot if I had stayed on the bottom there, but it was just a wrong guess by me. He was awfully good. I think we were as good as him, maybe better but in a three lap run he was going to be tough to beat.”

Sheppard wasn’t happy earlier in the night with the way the track prep went. It led to a surface that saw limited passing until late in the evening. He didn’t time great and didn’t make it out of his heat. As a result he had to run the consolation with his Bicknell No. 9s.


“My car is usually good on the bottom,” stated Sheppard. “I just had to wait for it to dry out. It was swamp down there early. Then it dried out some. That’s not really racing. They were awfully aggressive with the water truck after it rained for two days straight. Guess we’ll see what happens tomorrow.”

WIGHT GOES BACK TO FRONT – TWICE Larry Wight has no fear of a tacky track. The Phoenix, N.Y., driver has never been one to shy away from a fast track with where dropping the hammer is necessary. Wight showed that as he battled his way up through the field to get as high as third before blowing a right rear Hoosier tire. The team changed the tire allowing him to return and race his way back to fourth.

“We had a really good car,” said Wight of his Bicknell. “It’s a shame it took us this long to find the speed in it. We came down with a brand new piece, a brand new motor and we just needed to find out what it wanted down here at Volusia. I think if we could have started out up front we wouldn’t have had to run the car as hard and possibly wouldn’t have had the tire go on us.”

The team changed torsion bars after qualifying which they believe was the culprit with the setup. The tire issue was caused by jingle after a restart that saw him get together with Billy VanInwegen. Erick Rudolph was able to navigate his way forward by missing a couple of wrecks and staying in the shadows of Sheppard and Wight. The Ransomville, N.Y., driver doesn’t necessarily have the right combination for the conditions that existed on Friday night. He did the best he could with his Bicknell to put himself fifth in the final rundown.

“We knew we had our hands full with the way the track was,” mentioned Rudolph. “We really don’t have a big speedway engine program. The shorter bullrings more suits our style and what not. We were handling pretty good. We started 18th with really good company. We came up through with Matt (Sheppard). It looked like we were going to get a top three then Alan (Johnson) ran out of gas and we got cornered behind him. We’ll take a top five none the less.”