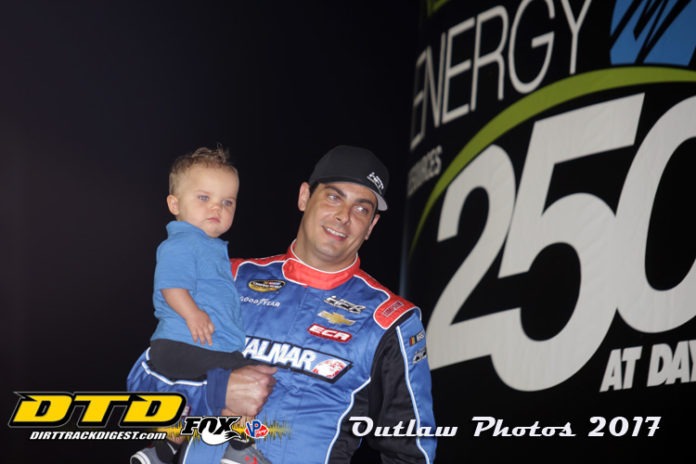 This wasn’t how it was supposed to end.

Stewart Friesen and the Halmar Racing Team had high expectations as they waited through the multiple practice sessions for the other divisions at Daytona International Speedway.

There was reason for a positive frame of mind and Friesen was prepared to kick off a season long adventure in the Camping World Truck Series.

What had started out as a one and done had suddenly blossomed to an unanticipated level.


Friesen explained, “Chris Larsen stopped by and talked to me and asked if I would want to race a truck at Eldora (Speedway). Things got on the right track and everything was in motion. After that race everyone was excited and Chris asked if we wanted to do more so we went to Bristol and the highlight came at New Hampshire where we finished 13th.”

Well, things took off from there.

Today the team has nine trucks at their disposal with three remaining from last year and all of Dale Earnhardt Jr.’s equipment.

Tommy Baldwin Jr., came on board as team manager and his brother-in-law Tripp Bruce is the crew-chief.

Looking at the equipment he will be running Friesen said, ”It is way better equipment, but remember we had to start somewhere and we did that last year. We had what we needed last year and it has led to this.”

Standing in the truck pits at Daytona in February wasn’t exactly what Friesen had envisioned. He said, “If you told me I’d be standing here today I would say you were full of it. It is great to be able to compete at this level. Growing up you dream of moments like this,but you don’t know if it will ever happen.”

Continuing he explained, “This is a real racers goal, but I wouldn’t be here today if it wasn’t for all the Modified owners who had provided me with an opportunity. I have to thank the (Tom and Roxanne) Cullens, (Tadd) Parks, (Jeff) Dailey, and Marty (Burdick) and I am dedicating this to all of them.”

Friesen can be a colorful character when it comes to Modified racing, but his coach might overshadow him. The veteran driver said, “My coach is Gary Balough. He was with Halmar helping Wil Auchmoody and he is familiar with the aspects of racing and has helped convert some of the Modified ways into truck. He has been there all along for feedback and technique.”

Friesen had reasons to be hopeful entering the first truck race of the year.

He said, “We have goals. We timed eighth in practice and it would be a dream to qualify and finish in the top ten.”

Well, sadly for Friesen the time trials for the trucks dragged out with two cars dropping liquid over a large portion of the two and a half mile banked speedway. He finally came out very late in the 42 car session and came in totally disappointed.

Apparently he has missed a shift and that clocked him in at 51.703 which at that time was 25th fastest. There might have been a moment of concern as just 32 trucks would start the 250 mile event.

He watched as other trucks relegated him further and further down the line up grid and eventually he settled for 29th starting position.

In talking with him in the afternoon he was confident that he could do well.

He said, “We have formed an alliance with GMS Spencer Gallagher and Johnny Sauter to hook up in the draft. They are veterans and I trust them.”

Friesen had adapted to the high speed drafting during the rain marred Thursday practice session.

He had never been on the banking before expect as he explained, “on iRacing simulation.”

Stewart had run the track so many times and noted, “iRacing gave me the feel, the bumps were right where they were and I could really get the lay of the land. I’m glad it was because Jess (his wife) kept telling me to quite playing games around the house. I told her it was a simulation and not a game.”

Continuing he said, “I was probably more nervous before going out on Thursday. I had my driver’s suit on, was in the car and it rained. We just had to wait it out, but within two or three laps I was in a draft with eight to ten other cars.”

Drafting is something quite new to him. He explained, “It is wild. You know what you want to do,but the other eight to ten drivers also have an idea of what they want to do. It is total concentration. Your car gets sucked up quick and you hope you can recover sometimes.”

Practice was almost perfect as he sat in the top ten of speeds at the end of the day and if he could ever be eighth quick on Friday’s time trials it would be a dream come true.

Time trials didn’t play out as anticipated and he was forced to start near the back of the field. On super speedways this is one place a driver doesn’t really want to be as he could be collected in “the big one”.

Before the race commenced the Hollywood style introductions were held on the portable stage. With huge jumbo-trons around the track there was dirt Modified stand out Stewart Friesen carrying his son in what was a touching and proud moment.

Off to the car they went, but unfortunately it was not going to be the Hollywood ending many had hoped for.

It didn’t take very long for one abrupt move in the middle of the pack to take out several cars.

Friesen appeared to have a good chance of escaping the carnage, but with pin ball like reflexes the trucks just bounded all over entering turn one.

Heavy left side damage sent the car to the pits. There would or could be no five minute repair job to send him back out. Friesen’s race was over before it began as he became a victim of one of those notorious “big ones.”

They’ll move on to Atlanta next week with high hopes.

This is a new team with veteran people behind it and despite the disappointment at Daytona, expectations are still high.