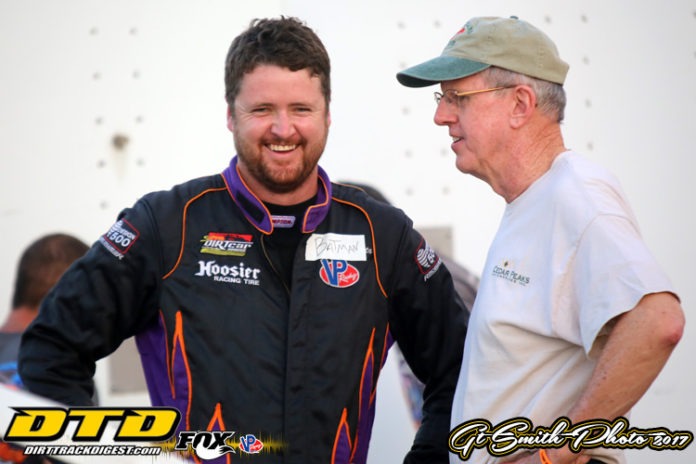 It’s been an up and down off-season for Australia native Peter Britten. Britten was informed early in the winter that he would have to go ride shopping after his deal with Heinke-Baldwin Racing was ended. He was able to put a deal together for weekly action at the Albany-Saratoga Speedway where he’ll drive for Andy Romano. On the Super DIRTcar Series trail, Britten plans as of now are to run his own equipment.

Britten debuted his car at the DIRTcar Nationals with mixed results. On Friday night Britten was involved in a hard crash with Joseph Watson in turn one.  His car was towed off with heavy damage.  He made repairs and rebounded on Saturday night to score a top five.

“Last night wasn’t good for us,” stated Britten about the Friday night incident. “It culminated with a crash at the end tearing the car apart. We don’t have many spares with us. You should have seen the door when we got here today, it was just a ball. I don’t know how we made that happen. All the guys here did a really good job helping get that thing turned around.”

Britten started third in Saturday night’s 40-lap feature after setting overall fast time on the night and winning his heat race. He fell back at the drop of the green before things got rolling for him just prior to halfway. He started charging up through the field getting as high as third before ill-timed caution stymied his pace. He concluded the race in fifth.


“We had a really good car,” said Britten. “The caution that came out on lap 26, that probably cost me the race. The way the track was racing out there I felt like I was the only one on the 500 (Hoosier Tire compound) because of the guys in front of me. I wasn’t good on restarts but the longer I went the better I got. Around lap 20 my thing started hauling and they were coming back to me.  Apparently they had 500’s on too so I don’t know what was going on but that’s what it felt like in the car. Either way, from third to finish fifth, it’s a little disappointing, but we had a shot at the win. It was a legitimate crack too. As long as you can say you had a legitimate crack at the win you can’t walk away that disappointed.”

The Saturday run for Britten felt good considering he was back to doing it on his own with his Troyer Car. It was tough for him to get everything done on the car in time to make the trek to Florida.

“As far as my own deal, it’s always more satisfying when doing it all off our own back, but it’s a lot more difficult,” cited Britten. “Just coming down here has been a struggle. I really didn’t have place work on the car. I had to do a little bit of normal work too.  I couldn’t just stay home and work on the car. It’s been tough, tough to get down here. I think I worked on car four days total, but it does feel good to come down here and run well.”

The success for Britten had on Saturday night gives him optimism when looking ahead to the season. After running as well as he did he knows his team is capable of reaching Victory Lane.

“I know we had a good car so that’s a good feeling,” commented Britten. “It didn’t go our way last night. We were a little underpowered for how fast the race track was. We got a good setup for the slick and that it what we run on up in New York.  I can walk away from here feeling content.”

Britten indicated he has a couple irons in the fire for 2017 but that nothing has been confirmed. As a result he’ll continue to look for other opportunities in hopes of being able to continue working full-time in the sport he loves.

“That’s only drives I got (Romano and own car),” Britten said. “I’ve talked to a few people about getting involved, but nothing has come of that. I might do some crew chief work, whatever I got to do make it happen. If it’s not a ride, but if I can make a little money doing the crew chiefing thing and keep racing, then that’s what I’m going to do.”

Britten’s shown in the past he can win. Saturday’s DIRTcar Nationals run proved he has the talent to compete against the best the Super DIRTcar Series has to offer, but for now he’ll just have to wait and see if an opportunity presents itself to do more in 2017.