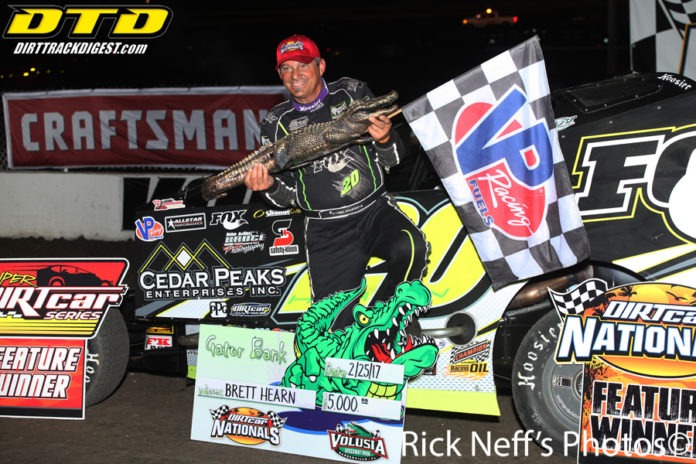 Winning a DIRTcar Nationals title isn’t new to Brett Hearn.  He’s done in now eight times in his Hall of Fame career, but on Saturday night he got something that hasn’t received before. He got the big gator trophy for that championship. Hearn’s last title in the Sunshine State came back in 2008, prior to the arrival of the big trophy.

“It’s an abbreviated gator, but it’s still a big ass gator,” joked Hearn. “This is awesome. This a great way to start to start season.”

Mother Nature claimed the first two nights of the DIRTcar Nationals for the Super DIRTcar Series Big-Block Modifieds meaning Hearn and company didn’t get to do the testing they normally get to do during the week. As a result they weren’t able to try everything they wanted to.

“We shortened up a few of the ideas we had with some of the things we wanted try,” commented Hearn. “You can’t control Mother Nature, never could, never will.”


Saturday night’s $5,000 win was his second consecutive and unofficially he’s won three out of the last four DIRTcar Nationals finales. Last year he was impressive in coming from the consolation to win the feature. This year he started on the front row of the 40-lap nightcap. He took the lead early and never looked back.

“I think this is three out last four $5,000 wins,” mentioned Hearn. “I don’t know. The way the track gets to be a certain way.  It gets to where I’m good at it. More so than when it’s muddy or slimy like it was last night. It was more our track tonight.”

Hearn was fortunate that it seemed like throughout the extra distance race that the cautions fell at the right time. He never really got into slower traffic which meant that he never really had to stray from his lane which was just a little off the bottom through the corners.

“Traffic was going to be really tough so I was really happy to see the yellows come out there,” he said. “It gave me open track again to let me drift around as opposed to really mixing it up and getting it in there and running the car different ways that I didn’t want too.”

Hearn is the all-time winner when it comes to racing in Florida. He now has 24 career victories as part of the DIRTcar Nationals. His next closest rival, Danny Johnson, has only 13. Hearn indicated that success comes from the off-season preparations in the shop.

“It’s only second race of year so we have a long way to go,” stated the Sussex, N.J., native. “This is a brand new car that we put a lot of thought and effort into. I have to be happy, this is what you want to do. This is what you go to the shop for everyday over the winter and work 12 hours for. You want to see it come to fruition here. We needed to do our homework over the winter and I think we did.”

Now that teams head back north, Hearn indicated that he’ll run a similar schedule to the 2016 season which saw him in the Capital District on Friday and Saturday nights as well as on the Super DIRTcar Series.

“We’ll be at Albany-Saratoga (Speedway), Lebanon Valley (Speedway) and we’ll hit a one off once in a while,” said Hearn. “We’ll see what happens. The series is tough enough when you are doing two nights on a weekend with one team. If I could find another team for to drive for on Friday nights I’d probably do that, but until someone can give me a car as good as the one I can make for myself I’m going to do what I do.”

Hearn hopes that 2017 goes better than last year. The all-time winner with the Super DIRTcar Series failed to win a full-point series event even after taking multiple wins at his home track. Like last year, Florida went well for him, now he’ll need that success to head back north with him when it comes to the tour.