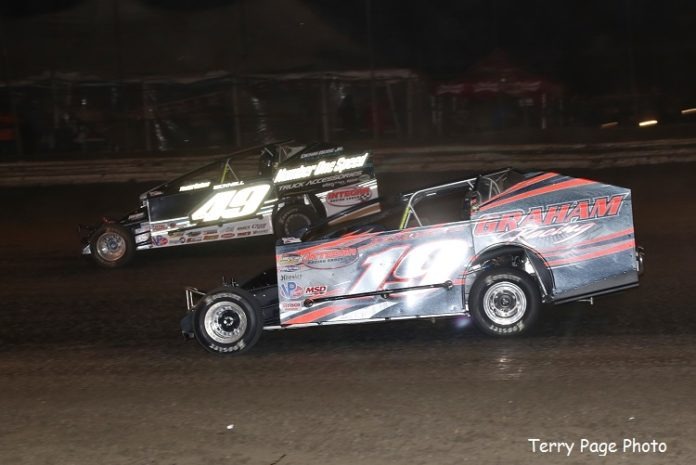 Tim Fuller and his Graham Racing team continued to be fast out of the box at the DIRTcar Nationals. The team opened up with overall quick time in Tuesday night practice before some visibility issues in Friday night’s feature cost them a top 10 run. Fuller rebounded in the 40-lap Super DIRTcar Series feature on Saturday night with a second place run. Overall, not a bad debut for the team.

“Last night came down to draw,” stated Fuller. “I was all mudded up and out of tear-offs with three laps to go. That restart, I took a sixth place finish back to a 12th because I couldn’t see. It is what it is. We were good tonight. We were strong. We’ve been strong in time trials and in heat races. Any time you can do that you’ll be there. I’m excited to get back to real racing in April.”

No matter what the track surface, Danny Johnson usually finds a way to bring his No. 27J to the front. On Saturday night the Rochester, N.Y., driver fought and clawed his way to a third place finish after starting 14th. He took advantage of every opening to make his way to the podium.


“I had an awesome hot rod,” mentioned Johnson. “I just started way back. We didn’t qualify where we needed to qualify, but we started in the back and came up to third. The team is real happy with that.”

In final third of the race it looked like Johnson had something for Fuller as he looked for second, but Fuller never gave him an opportunity as he kept the lane below him closed tight.

“He was holding me up,” stated Johnson of Fuller. “I couldn’t get by him. It was tough racing. I really wanted a double-file restart there at the end but I didn’t get it. That’s the way it goes.”

DRG GETS A GATOR

Because of the high number of Big-Block Modifieds that made the trek south and the pair of rainouts, DIRTcar officials elected to run a non-qualifiers feature on both Friday and Saturday night. Friday night’s race was canceled due to fog and on Saturday night the 12-lap race was won by Darwin Green, of Susquehanna, Pa. Green led the entire distance for his first triumph at the track.

“This is awesome,” commented Green. “I’ve been laying out the suggestion for a couple of years. I think this is great. You got all these guys that are here and they have trouble qualifying because there is so much competition down here. It’s so much fun, this is a great idea for the drivers.”

Green was fortunate to even be in action on Saturday after a nasty wreck on Friday. Green’s car made vicious contact with the turn one wall in the feature nearly sending him over. Luckily he wasn’t hurt.

“Last night that car was headed,” said Green. “There was a hole there. I went for it and I was the second one there. It didn’t work out. The car was so fast last night. I really thought we were heading to the front.”

Four drivers were unable to return to action on Saturday night at Volusia Speedway Park. Randy Chrysler after flipping Friday, Yan Bussiere and Vic Coffey reported motor issues and Joseph Watson bent his car in an accident on Friday…

Friday night’s track was hammer-down fast with the track remaining extremely tacky all night long. Saturday, not so much. The drivers faced a very slick trick that many expected to take rubber. According to winning driver Brett Hearn, it didn’t take rubber until late…

The joke was made that it looked like Super DIRT Week at Syracuse with all the pit stops made during the feature. Nearly half the field pitted at some point to change a tire during the 40-lap feature.  After looking at tires on pit road, the wear didn’t seem to be as expected…

Larry Wight won his consolation two nights in a row. He scored a top ten finish both nights as well…