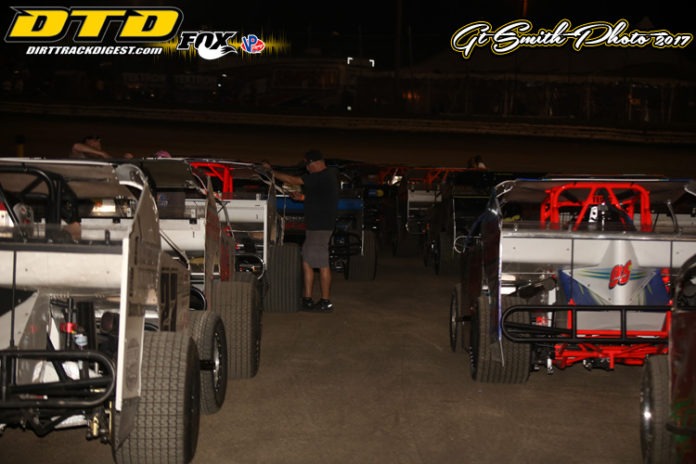 For us, the week of the Daytona 500 is more than the 500. We celebrate the racing of today along with the racing of yesterday. We spend our nights at Volusia Speedway at the dirt track and our days at parades, museum functions of LLOAR (Living Legends of Auto Racing) so that our week is full of the future and the history of this sport. In between we also went to a party at Hertha and Marty Beberwyk’s where we also met drivers from the past, Ernie Marshall, Tommy Corellis and Barry Cone a trio that has over 110 features between them at Lebanon Valley. On Thursday we spent a couple hours at the LLOAR Museum for an informal program they call “Coffee with the Characters” and believe us this is aptly named. Just a few of the characters that strolled in over the four hour event were, Will Cagle, Bugsy Stevens, Jack Anderson, Blackie Wangerin, Vicki Wood and Dave Dion who served as MC for the event. And they all had stories to tell taking advantage of the relaxed atmosphere. It was a fun time and absolutely FREE!

First timers at Volusia Speedway for the DIRTcar Nationals turned out to be a very comprehensive list of dirt track racers from home tracks in the Northeast. As we look at these first timers for Speed Weeks 2017 we know we’re looking at their memories to be spun into a story fifty years from now.

Joseph Watson comes from Milford, Del., and drives the second car in the Jamie Mills stable. He has been racing Modifieds since 2008 and regularly races at Bridgeport Speedway in New Jersey and Delaware International. He cut his racing teeth in Micros, Karts and Crate Mods. Joseph qualified for Friday night’s main event and finished 21st after a tangle with Peter Britten on lap 10. Watson did not race on Saturday.


Ryan Anderson of Nottingham, Pa., also races regularly at Bridgeport Speedway in Big-Block Mods. Anderson missed qualifying by one spot in heat four on Friday. This put him into the second cons where he missed qualifying by just one spot once again which would have put him in the Non-Qualifier event had it not been fogged out. Saturday Anderson did not qualify for the main event. Dave Hunt is from Bridgewater, N. J., has been racing for 15 years, six of which have been Big-Blocks. Dave got to his first qualifying effort in heat two he was unable to qualify forcing him to try again in the first consi where he finished eighth. Dave’s second night was about the same.

Jim Britt from New Town Square, Pa., was also at Volusia for his maiden run during the DIRTcar Nationals. Britt is coming off hisrookie season at Bridgeport Speedway in the big block division where he also scored a win. Britt failed to qualify both nights but came out in the Non-Qualifier event on Saturday night.

Steve Davis races regularly at New Egypt from his hometown of Jackson, N.J., and was the New Egypt Sportsman Champion in 2016. He raced a Big-Block at New Egypt twice in 2016 and made the trip like several others, to race for the first time in a big block mod at Volusia during Speed Weeks in Florida. Davis qualified second in the second consi on Friday and finished 18th in the main event. On Saturday Davis finished fifth in the second consi and did not come out for the Non-Qualifier event.

Canada was represented by newcomer Mike Bowman of St. Catherine, Ont. Bowman races a Small-Block regularly at Merrittville Speedway where he has 20 small block wins one which was a Big Block Series win in a small block. He has two wins in the states. Russ Morseman is from Addison, N.Y., and races regularly at Woodhull and Outlaw Speedways in the Southern Tier of New York.  He came to Volusia to run his first time in a Big-Block modified. Morseman failed to qualify on night one and would have been in the Non-Qualifiers event if not for the fog. The second night Morseman dropped out of his heat with mechanical problems but came back to compete in the Non-Qualifier’s event.

Dillon Steuer, a 14-year-old from Bohemia, N.Y., came with a Big-Block mod powered by a borrowed engine from Tyler Dippel. Dillon is in a year of firsts, his first time racing a Modified was at Middletown on the hard clay in April 2016. He has raced Karts, Slingshots in Pennsylvania and Delaware. Dillon finished eighth in his first qualifying heat at Volusia, moving him to the rear of the first consi. He did not go out. On night two Dillon made it to the Non-Qualifiers event where he was one that gave winner Darwin Greene a challenge.

Another first timer at Volusia although it was a surprise was Mike Mahaney of Kings Ferry, N. Y. Mahaney’s first trip to the Florida oval comes with his impressive resume of 37 wins in the past five years. At Volusia he was still a new comer that qualified for both night’s main events finishing 16th on Friday and 21st on Saturday.

Mike Maresca from Potsdam, N.Y., came to Volusia as an occasional Big-Block chauffeur this past season. Maresca regularly races at Mohawk and other North Country tracks. On Friday he would have been in the Non-Qualifiers race if not for the fog. On night two of the Big-Block mods, Maresca qualified for the feature and finished 13th.

Billy Whittaker came to Volusia from Central Square, N.Y.  He’s a regular at Fulton Speedway during the season. Although it was Whittaker’s first time on the dirt at Volusia, years ago he raced on the asphalt track (now the go-cart track) in a NASCAR Late Model. The first night of mods Whittaker did not qualify (one spot out). On Saturday Whittaker finished 16th in the feature after qualifying third in the third heat.

Brandon Walters from Unadilla, N.Y., is a Fonda Speedway regular. Walters qualified for the main event both nights, the first night finishing 19th due to being in a tangle with Darwin Green another Fonda regular; Walters was able to keep going after Green wrecked. On Saturday night Walters finished 15th. Making the main event both nights is quite an accomplishment for a new comer and we congratulate all for their efforts.

As we close another Speed Weeks in Daytona we thank all those that contributed to our enjoyment.