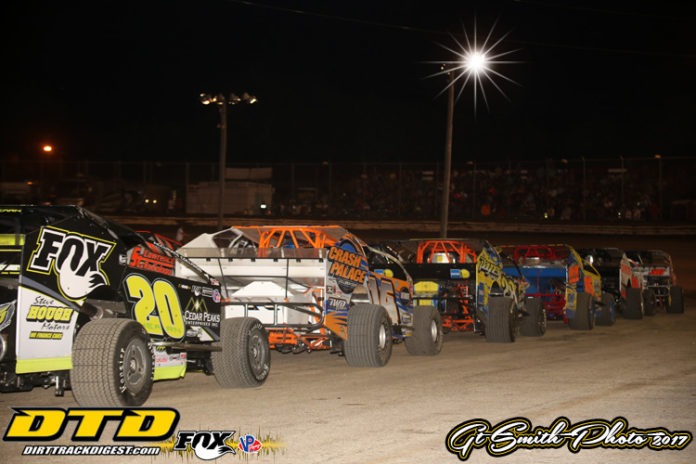 And just like that another DIRTcar Nationals at the Volusia Speedway Park is in the books for the Super DIRTcar Series Modifieds. It was a tough year in Florida as two of the four nights of racing action were lost due to rain. It hadn’t rained in nearly three months before the deluge that hit on Wednesday into Thursday. As a result, the Modifieds only got to compete twice before heading back north.

Although the race action was abbreviated, there a five things that we can take away from the action that took place on Friday and Saturday night.

1. New Team, No Problem for Fuller

Florida racing meant that Tim Fuller was able to make his debut car owner Ray Graham. Fuller was fast out of the gates as he timed quickest in two of the three hot lap sessions on Tuesday night. Friday night the track was heavy and muddy. As a result Fuller lost vision late in the race losing what looked to be a guaranteed top ten or a possible top five. On Saturday when the track slicked off to become more like New York racing, Fuller excelled. He made his way forward to finish in second. Fuller has a lot of good equipment at his disposal for 2017. Look for things to get even better for Fuller as the team learns each other in the coming months.


2. Max and Matt Are Going to Do Well

About midway through the 2016, Heinke-Baldwin Racing started the switch to Teo Pro Cars with Jimmy Phelps. During the off-season that switch continued as the teams second car driven by Max McLaughlin moved over to the brand. Along with the change, the team was able to work out a deal to get long-time crew chief Matt Hearn on board with McLaughlin. That decision has already paid dividends. McLaughlin was solid both nights missing out on the DIRTcar Nationals overall title by one point. He was fast when the track was heavy on Friday before handling the slick surface on Saturday. One of the best battles on Saturday night occurred between McLaughlin and Matt Sheppard. McLaughlin looked more like a veteran than a driver in only his second year in Big-Block Modified competition. Look for big things from the Mooresville, N.C., transplant in 2017 including some stops in Victory Lane.

As the 2016 drew closer to the end all the talk was about how Brett Hearn didn’t win a series race. Which, technically he didn’t win a full point show, but he did have a win in the 50-lap non-point DIRTcar Nationals finale. This year the Saturday night ending was the Hearn show was again. He dominated the 40-lap race to pocket a cool $5,000. That win propelled him to his first big gator trophy and his record eighth DIRTcar Nationals title. Hearn was pumped about the victory.  This year you should expect to see Hearn go go back to Victory Lane in a full-point event. He’s just too good not to.

For the first time in recent memory over 40-cars filled the pit area for the Big-Block Modified portion of the DIRTcar Nationals. That included a host of first timers. By our unofficial count the following drivers were making their first ever trip to Volusia Speedway Park: Ryan Anderson, Mike Bowman, Jim Britt, Steve Davis, Dave Hunt, Mike Mahaney, Mike Maresca, Russ Morseman, Dillon Steur, Brandon Walters, Joseph Watson and Billy Whittaker. McLaughlin ran a UMP Modified at the track in the past but this was his first Big-Block action. Hopefully this is a sign of good things to come for Modified racing in 2017. It would be good for the tracks and various traveling organizations if they had solid car counts just like Volusia.

5. The Chassis War is On

Every year chassis manufacturers count wins, top five’s and so on. This year the DIRTcar Nationals saw a battle between the Bicknell and Teo teams. Friday night’s main-event was the Bicknell show as Justin Haers drove his to the win with a total of four out the top five driving for the manufacturer. Teo rebounded on Saturday night scoring two in the top five with Hearn taking the win. The Bicknell’s of Fuller and Danny Johnson finished second and third while McLaughlin’s Teo was fourth followed by Peter Britten’s Troyer in fifth.