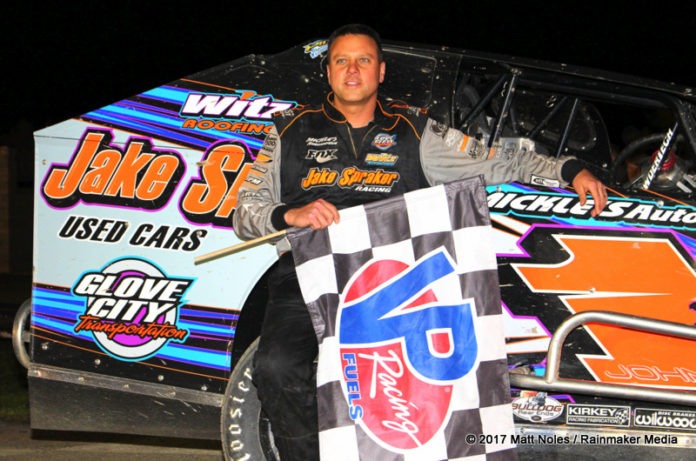 SPRAKERS, NY – Boxing aficionados know that only one thing matters in the ring.

The memory of your career will never be based upon how many title bouts you fought in or how many heavyweight belts you’ve collected over the span of your fighting life. Instead, how you will be remembered comes down to one solitary feat; when you were knocked down, how well did you get back up.

Racing, in certain terms at the very least, lies in close proximity to boxing where the aforementioned statement in concerned. If that seems like an overreaching conclusion one has to look no further than that of third-generation driver and two-time Fonda Speedway track champion, Ronnie Johnson. Johnson, who convincingly conquered the Modified division in 2011 at the famed Fonda, New York oval, was down and out by all appearances as the 2015 season came to a close. With no notches in the win column and a parting of ways between himself and long-time car owners Alton and Carole Palmer, it looked as if his career was officially on a downhill slide. Then again, looks can be deceiving.


Enter Jake Spraker; known in the realm of dirt Modified racing as being one of the last of the great car owners. It’s a moniker that’s well deserved and though he seemed content to walk away from the Modified division completely at the end of 2014, a chance meeting and numerous phone calls between himself and Johnson changed his mind in the most fortuitous of ways. The new found relationship between Spraker and Johnson wasn’t a cut and dry business deal by any stretch of the imagination. To be perfectly honest, it was more like the duo were set up on a blind date by mutual friends. However, from the onset of the 2016 season, their partnership turned out to be better than either one of them could have ever thought imaginable. It really was a match made in racing heaven.

“2016 was very satisfying for us,” stated Johnson. “Coming off of the previous couple of seasons that we had, our confidence was certainly down. Right when Jake [Spraker] and I got together, we had a team meeting and we definitely thought we were better than we were performing and we felt that with the equipment Jake was putting under us we could really improve.”

Johnson and his drive to ‘improve’ quickly morphed into a gross understatement as when the historic Fonda Speedway opened its doors for the first time last year, the No. 1RJ quickly rocketed to the top of the speed charts and found victory lane frequently in the first month of competition at the ‘Track of Champions.’

“I definitely didn’t think that we’d win three-in-a-row right out of the box,” Johnson continued. “But I felt like we had a chance to win some races and had a shot at being a contender for the track title and ultimately it all played out our way and we had a great year.” To bounce back from adversity as quickly as Ronnie Johnson did from 2015 to 2016 takes much more than just a winning attitude or top-notch equipment. It takes a core group of dedicated, hard-working people behind the scenes to propel a driver from worst to first. In this facet, Johnson has had one of the more robust teams in the business for the better part of the past decade.

“I’ve felt that for years we’ve had the strongest team at Fonda,” He explained. “Our pit crew and the experience that we have make us a threat every time we pull into the pit area. The core group of guys that we have is second-to-none. We just needed someone like Jake and Nancy [Spraker] to come along and provide us with what we needed to be able to prove ourselves.”

The final night of points at the Fonda Speedway quickly turned into a promoters dream last season. With Ronnie Johnson, Bobby Varin and Jeremy Wilder all but tied going into the season finale, Johnson knew there was only one way to guarantee another crown for his collection. He had to win the feature to win it all. A plan that was quite simply easier said than done.

“The bottom line for us was to be prepared for that last week,” Johnson stated. “We worked really hard to be ready and we knew that we had to walk into Fonda that night racing to win; plain and simple. That’s the mindset that we went with and we put every ounce of effort into making that happen in every aspect we possibly could. The way that night played out, the way we won the race and the title really topped off what was an incredibly satisfying season for us. It really proved who we are as a race team and it really proved the type of car owners that Jake and Nancy are.” Any driver that is fortunate enough to win more than one track championship will tell you that the experience of each title is different and the meaning to each one changes with time. Though Johnson snapped a five-year dry streak between his first and second title runs, he seems content with, and equally pleased, of both efforts.

“We’re proud of both our championships really,” Johnson remarked. “2011 was special because my father was still able to go to the track at that time and to share it with him was something I’ll never forget. 2016 was special because of all the frustration we went through the previous years and thanks to the new life we found, we were able to prove that I could still get the job done and so could my race team. It was a moment of validation.”

As the 2017 season edges ever closer, the team of Spraker and Johnson are getting ready to return to the dirt of the Capital District in earnest with the same fire and determination that took them to victory lane convincingly last season leaving some to speculate whether or not the momentum from the success garnered a year ago can be continued. If Johnson’s attitude in any indication, it’s a pretty safe bet.

“Right now for 2017 we have two Jake Spraker owned cars and some fresh motors ready to go,” stated Johnson. “I feel like we do have some momentum going from last year and our confidence is definitely at a higher level than it was at this point in time one year ago. We have a lot of enthusiasm and our whole race team is having a lot of fun right now and we’re really enjoying what we’re doing again.”

For Johnson, the joy and elation of winning his second-career championship was more than worth the wait. However, that season has ended and a new one is taking shape quickly leaving the driver from Duanesburg, New York no other choice but to focus on the newest task at hand; defending his Modified crown.

“It feels good to win another title but it’s not going to go to my head,” He said. “We take a lot of pride in our accomplishments but we’re not braggers or boasters. I still look at guys like Dave Lape or my father [Jack Johnson] and they’re the establishment of Fonda Speedway. Those guys set the bar of what Fonda is and they just kept their heads down and kept racing. They didn’t brag or say ‘look at me,’ they just raced and right now, that’s what we’re looking forward to doing.”

Though it would be easy, simpler even, for Johnson to take credit for his return to winning form, that wouldn’t fit his style; being humble has gotten him this far in his career and as the old adage states, if it ain’t broke, don’t fix it.

“I couldn’t have done this by myself,” concluded Johnson. “Without Jake and Nancy Spraker, my wife Shelley, my stepdaughter Nikki, my crew, and everyone else that supports me, I never could have accomplished what I have. They make racing fun and make me eager to get back to the track again in 2017.”