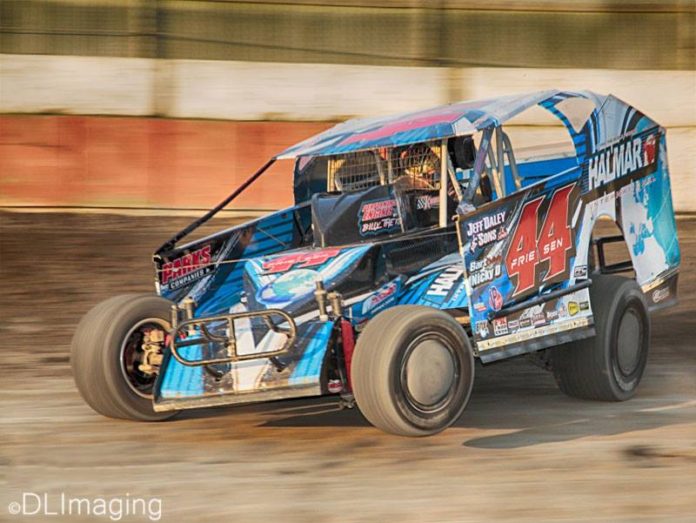 With the 2017 racing season upon us, Stewart Friesen will begin a new chapter in his career. Stating this February, Stewart will compete full-time in the NASCAR Camping World Truck Series, driving the No. 52 Chevrolet Silverado for Halmar Friesen Racing, But to understand how Stewart achieved this success, you will have to go back 33 years.

Born on July 25,1983, in Niagara-on-the-Lake to Jamie and Yvonne, Stewart was destined for a career in motorsports., Stewart’s grandfather, Stanly Freisen, was a long time racer and owner of Ransomville Speedway. Stewart’s parents, Jamie, and Yvonne, along with Stewart’s uncle, Alex, helped co-manage the track for many years along with other members of the Friesen family. While managing the track, Jamie and Alex were also heavily campaigning their own racecars. Sadly, Alex Freisen was killed in a snowmobile accident in 1996.

There have been a lot of changes for Stewart Friesen since helping his family with the various odd jobs and tasks around the grounds of Ransomville Speedway as a young boy. The 33-year-old would later hone his racing skills at the family run track.

As time went on, Stewart would begin racing Midgets, Sprint cars, .358 Modifieds and the ever-challenging Big Block Modifieds, and has succeeded in every class he has entered. The four-time Syracuse 200 Big-Block Modified winner got his big brake in late 2015. The highly successful Chris Larsen, owner of Halmar International Racing, had decided to going all out for 2016 racing season by teaming up with Stewart. In a coordinated effort, with Friesen’s current owner Jeff Daley’ the team was built up over the winter months to go after the Dirt series Championship.


Stewart would primarily campaign the number 44 Big Block Modified in 2016, however, by mid season, Chris Larson had his eyes set on NASCAR Camping World Truck Series race at Eldora in July. Stewart would finish 28th in his first NASCAR event. Stewart continued to campaign in the Big Block in the Dirt series throughout the 2016 season. He also raced four more NASCAR Truck series races at Loudon, NH, Las Vegas, Phoenix and Homestead. Stewart would also capture his fourth win at the Syracuse 200.

From all the success of the 2016 season and with Stewart’s years of racing experience, the stage was set to go full time in the NASCAR in 2017.

Stewart is set to start his biggest adventure yet with his wife, Jessica (a great race car driver herself) along with their son, Parker. With the backing of Halmar International Racing, Stewart is poised for greater things to come. I am confident his late grandfather Stanly will be proud.