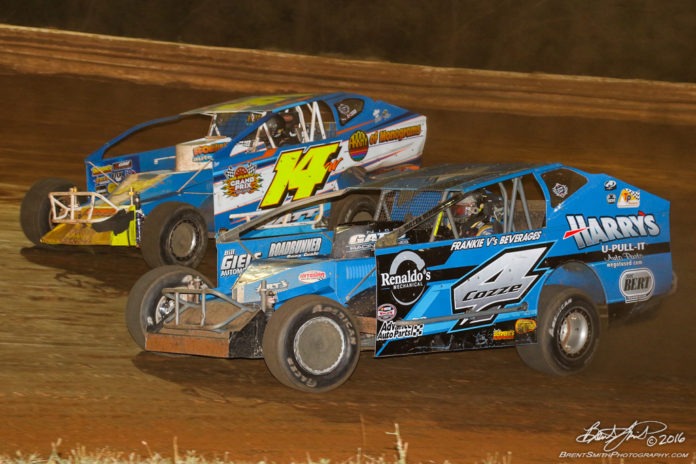 We are only a few days away from the start of the 2017 racing season and the first race on the schedule is the Melvin L. Joseph Memorial race at Georgetown Speedway scheduled for Saturday March 11th. This show will be the kick-off race for the Brett Deyo promoted STSS South Region Series sponsored by Velocita-USA. VP Fuels is the official fuel supplier of series along with American Racer Tires as the official tire supplier. Both the STSS North and South Region are sponsored by Bob Hilbert Sportswear.

The 2017 STSS South Series looks to be even bigger and better this season with the competition expected to be fierce for the coveted series championship. If the last two years are any indication of what’s in store for the series this year, the fans are going to be very happy in 2017.

Last season a total of 113 different drivers participated in the series seven events. When it was all said and done it was Stewart Friesen of Sprakers, N.Y., taking home the big check and trophy for 2016. Friesen held off 2015 series champion Ryan Watt in a fierce side by side battle at Georgetown Speedway to win the race and the title. Duane Howard, Ryan Godown and Craig Von Dohren rounded out the top five in series points.


Below is preview of some of the drivers planning to participate in this year’s STSS South Region:

Stewart Friesen: The 2016 series champion hopes to be able to defend his title in his Halmar International #44. The biggest obstacle for Friesen will be his ability to make each race due to his commitment to compete fulltime in the NASCAR Camping World Truck Series. Friesen has said he will do his best to make each race and defend his title. Weather will play a big part in his ability to do so.

Ryan Watt: Watt who has finished no worse than second in the two year history of the series will be shooting for his second title in three years aboard the Ron Roberts Racing #14W. After driving Troyer chassis Modifieds for the past few years Watt will debut a new Bicknell chassis at the season opener this weekend at Georgetown. Watt has branched out and traveled more the past few years and it has shown as he has become a challenger at each and every race he attempts.

Duane Howard: After a turbulent 2016 Howard is back with a chip on his shoulder in 2017 to prove to his fans and to himself that he is still one of the best dirt Modified drivers in the area. Howard will be behind the wheel of the Norm Hansell owned #357 full-time in 2017 and is looking forward to a big season. The team really started to come together at the end of 2016 with a couple of big victories to close out the season. With a complete off season to prepare the team’s Bicknell Modifieds, Howard is hoping for a stellar year.

Ryan Godown: This season could be the year the Godown puts it all together in the STSS South Region. After a strong start to last year’s STSS, Godown slipped up in the middle with a couple of bad finishes that really hurt his chances at the title. Godown did win arguably the most exciting race of the series at Susquehanna Speedway to help him get into the top five in points at season’s end. Godown will compete in this year’s series driving the potent Mike Petruska & Son’s / Atlas Paving #66 Teo Modified. This team could prove to be a formidable pairing and a strong contender for this year’s title.

Craig Von Dohren: After a year traveling the complete circuit driving the Dick Biever #14, Von Dohren will be a strong contender in each and every race this season. The team was very steady in all of the series races last season and is looking to take that experience that they learned last year to propel them to victory in 2017.

Jordan Watson: After traveling the STSS circuit for the past two years Watson is hoping that experience will pay off for him in 2017. Watson will again chase the series championship and if he can stay away from a couple of bad finishes that plagued him last season Watson could be right up there at year’s end to contend for the series title.

Billy Pauch Jr.: The “Kid’s Kid” is hoping that having a steady ride for all of the series races in 2017 will help him contend for the series title. Pauch Jr. drove a multitude of rides in the series last year and could never seem to find that steady comfortable feel he was looking for. Driving for the Danny’s Pizza Pizzazz #51 team this season in all of the series races Pauch Jr. is confident going into the 2017 series. The team has two new Bicknell chassis Modifieds in their stable and hopes to give Pauch the feel he needs to contend. The key to this team’s success is how fast they can get out of the box and gel as a team.

Rick Laubach: The 2016 STSS did not produce the season that Laubach was used to. After finishing the 2015 season in fourth place with two wins, Laubach slipped to ninth place in last year’s points race and was only able to record a season’s best finish of seventh in the series. Laubach hopes to be rejuvenated in 2017 and will travel the series in the #1K Bicknell chassis owned by former driver Ryan Kerr. It was a tough 2016 for Laubach but 2017 looks to be a comeback year for the “Quaker Shaker”

Jamie Mills: 2016 was not a good season for the veteran modified driver out of Delaware. Mills got off to a slow start in last year’s STSS and before he had the chance to turn it around Mills was involved in a very scary incident in June at Bridgeport. Mills car ended up on fire and on its side after a very violent hit. Luckily for Mills, he was able to exit car although in some pain. After a trip to the hospital later that night Mills was found to have broken ribs which sidelined him for most of the season. Mills did return to action in September. With a new Bicknell chassis for 2017 Mills is hoping to get back in form and return to victory.

Jimmy Horton: Horton spent the early part of the 2016 trying to organize his Halmar International Racing team causing him to get a late start on the STSS. After competing in the opener driving the Danny Pizza Pizzazz number #51, Horton was involved in a wreck early in the event putting him behind early in the points. Horton also ended up missing the race at Delaware International after wrecking at his Saturday night home track the weekend prior to the race. Missing that race all but put an end to Horton having any chance at winning the title. For 2017 Horton once again will be sponsored by Halmar Int and has a new Bicknell chassis in his stable to go along with last year’s Teo chassis and plans are to chase the complete series this season. The “Sensational One” is way ahead of where he was at this time last year in terms of preparation and is looking forward to get back on the winning track.

Billy Pauch Sr.: 2017 could very well turn out to be “The Kids” last year running a dirt Modified. With nothing else to prove in his highly successful career and a new grandson to dote over, Pauch would like nothing better to do in 2017 than to go out on top with a STSS championship. Pauch has the equipment and the talent to do just that. Pauch showed at the end of last year he can still get it done by winning the “King of the Big Blocks” race at Bridgeport Speedway.

Jeff Strunk: In the opener last season at Georgetown Speedway it was looking like Strunk was going to win going away. After blasting through the field and taking the lead, Strunk was pulling away with ease until disaster struck. The Glenn Hyneman #126 ended up breaking an axle taking away what was looking like a sure win. That turn of events seemed to set the tone for the rest of the 2016 STSS series for the team as they seemed to struggle the rest of the way. The potent team is looking to rebound in 2017 and contend for the championship.

David VanHorn: I guess you could call VanHorn’s 2016 season a season of change and reorganization. VanHorn started out the season driving sporadically in his own equipment with plans to only compete in the STSS South series along with other special races. In June, the opportunity came for VanHorn to drive for the the #323 team of Fred Vahlsing who had just released Neal Williams as his driver. VanHorn took over control of Vahsling’s equipment and spent the rest of the season evaluating what they had and what they needed going forward. The team did debut a new Bicknell chassis during the season. With a full off-season to prepare for 2017 look for VanHorn to get back to victory lane in the series and improve on his 10th place points finish of last year.

Although I believe the series champion will come from one of the drivers listed above there will be plenty of other drivers at each and every race that will be contending for wins and series points. Delaware drivers HJ Bunting, Brad Trice, Matt Jester have the talent to win at each and every race and will be looking to win one for the lower state of Delaware.

At this week’s Melvin L. Joseph Memorial race alone there will be quite a bit of talent coming down from the STSS North region to compete looking to get their season started. Expected to be in the field this Saturday from up north is 2016 STSS North Series champion Andy Bachetti, joining him as well will be “The Doctor” Danny Johnson in the Gary Mann #27J. Craig Hanson, Danny Creeden and Brian Malcolm also have plans to compete this weekend at Georgetown.

When pressed to make a prediction on who is going to win the 2017 STSS South title I have to go with the driver that won the title in 2015 and finished in the runner-up spot last season. That driver is “Flying” Ryan Watt. I just think Ryan has improved each and every year as he has traveled more and seems to be the driver that stays out of enough trouble to finish each and every race in a respectable position.

However, each and every driver listed above has the talent and the equipment to win the title. This year’s series should be as competitive as it’s ever been and I for one can’t wait to get the season started this Saturday at Georgetown.

For more information on the STSS please visit www.bdmotorsportsmedia.com

I can always be reached at dirtracefan25@hotmail.com for any comments or questions.