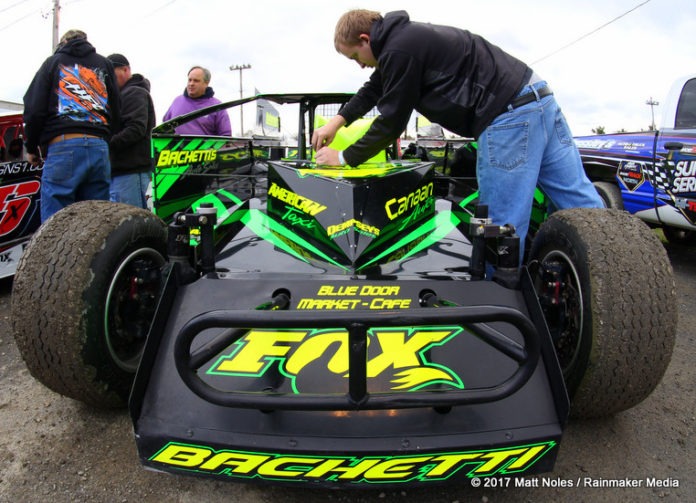 After what seemed like a struggle one year previous, the Sheffield, Mass., native was one of the fastest drivers in northeast dirt modified racing last year from the onset and to be frank, he never turned the wick down.

With 12 wins in just 44 starts, the ‘Wild Child’ became a force to be dealt with weekly at both the I-88 Speedway in Afton, New York and the Lebanon Valley Speedway in West Lebanon, New York. As if his weekly exploits weren’t enough, one of which garnered him a track championship at the quarter-mile bullring in Chenango County, his title run with Brett Deyo’s Short Track Super Series Fueled By VP gained him even more notoriety. “Last year was just phenomenal for us,” stated Bachetti. “To go out and be consistent for every race and have the top-five and top-ten finishes that we had and to roll off the trailer as good as we did every week was just unbelievable. It’s a testament to our race team and what we are able to do.”


Bachetti, who is accustomed to facing adverse conditions and extremely strong competition, didn’t falter on his way to the 2016 modified crown at the I-88 Speedway. Though some might have thought he had it easy week-after-week, there simply was little to no truth in that assumption. There were weeks where the newly minted track champion had to charge from ten-rows deep in the field to find victory lane at nights end.

“We went there [to I-88 Speedway] and just put our heads down,” continued Bachetti. “We made the right calls at the right times and I have to say, having Billy the Kid motors for our small-block program was just awesome all year. We didn’t skip a beat and all of our cars were just awesome through the whole deal. I just can’t say enough about it.”

When Brett Deyo launched his Short Track Super Series in 2014, Andy Bachetti edged out the legendary Danny Johnson for the inaugural crown. A mere two years later, Bachetti duplicated his 2014 triumph by becoming the first repeat champion in the history of Deyo’s popular racing program. “I’m very fortunate to have the sponsors to be able to chase the whole series like we did last year,” Bachetti stated. “People like Mike Garrity [Garrity Asphalt Reclaiming] give me all the tools I need to go out there and run for a championship. Just to have that alone is huge and having the Deyo series [STSS] south and north and the money he’s paying is just an awesome deal. I mean, even if you finished 10th, you still made a grand. No other series can top that.”

Aside from the glowing reviews that Bachetti has for Brett Deyo and his series, he’s also become a proud supporter of the American Racer Cup for reasons which need little to know explanation. “Having the American Racer Cup to race for has been awesome,” h    e said. “You can go out there and race week-in and week-out and at the end of the year; you end up in contention for a couple of titles.” When the driver of the familiar No. 4 small-block left the Accord Speedway [in Accord, New York] for the I-88 Speedway in 2015, there were quite a few unknowns and the results showed. Over the offseason before the 2016 campaign began that April, Bachetti and his race team did a large amount of research to improve their program. As he said earlier, they made the right decisions when they needed to.

“We learned and we figured out what we needed to go faster there,” Bachetti stated. “We worked extremely hard over the offseason getting our cars set up correctly and we did some testing here and there. Once we got the cars to where I felt comfortable, we had the time to go out, hit the track and make them right.” It wasn’t just Bachetti’s small-block program that had noticeably improved from 2015 to 2016; his big-block program did as well and that is evident by his performance at Lebanon Valley last season. With four victories against drivers like Brett Hearn, Kenny Tremont and Keith Flach, it’s safe to say that everything is certainly headed in the right direction.

“We had some really good runs at Lebanon last year,” continued Bachetti. “We were definitely in the hunt every week and we were fast there for the most part. I think we’re missing a couple of things but I honestly feel that I have a better handle on that place and I think I know what I need to go back there this year and contend for another title.”

While the racing season in New York State is still weeks away, Andy Bachetti is feverishly getting ready to load up and head south to the great state of Delaware for the season opening Melvin L. Joseph memorial at the Georgetown Speedway [in Georgetown, Delaware] this Saturday.

His exploits at the famed speedway earned him two top-five finishes at the beginning of last season. As satisfying as those results undeniably were, Bachetti is understandably hoping to improve upon his early success from one year ago. As many fans and competitors have noticed, there’s something about Georgetown that suits his driving style.

“I don’t know what it is really,” commented Bachetti. “We just seemed to unload fast whenever we were there. We definitely had some good draws and we came through the field a couple of times. It’s a fast, on-the-wheel type of race track and I just took to it rather well. I can definitely say that I’m looking forward to hitting the track this weekend.” Aside from starting off his season this Saturday at Georgetown, Bachetti is looking forward to getting back into the same routine and schedule that he pursued last season. “We’re pretty much looking at running the same program as last year,” He said. “We’re going to chase all the titles again and hopefully we can come out running strong and be on top of our game. That’s the key.”

Though some items may have changed from last year to this year, much of the same reasons behind Bachetti’s success have not. That is certainly an asset for himself but it may be more of a detriment to his competition.

“We have a few new things in the works that I’m pumped about,” concluded Bachetti. “But for the most part, nothing has really changed. I have a lot of good people behind me. My wife, my kids, my sponsors and my mother and father and everyone that’s involved in this program make it all possible. We’re all in heading into this year.”