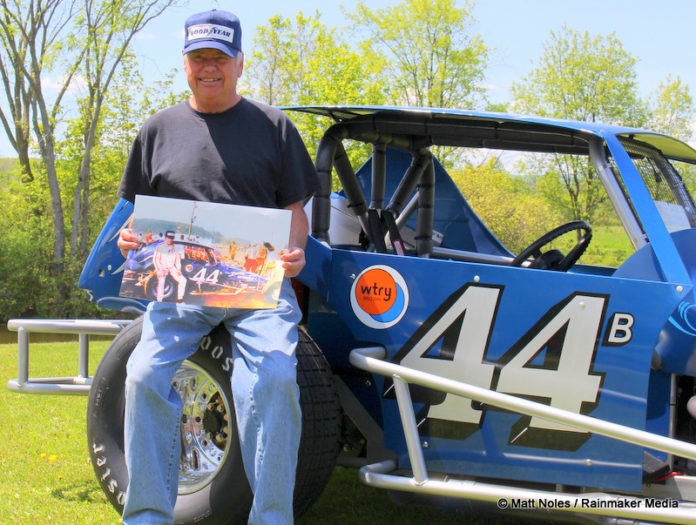 SPRAKERS, NY – It’s been over 40 years since Dave Lape was at the New York State Fairgrounds with a Tobias chassis. Now, history is set to repeat itself.

After a painstaking and thorough restoration that took nearly three-years to complete, the Hall of Fame driver from Canajoharie, New York is set to return to the sight of where it all began this weekend for the 31st Annual Motorsports Exposition and Trade Show at the Center of Progress Building.

For Lape, bringing the car back to where it all began makes perfect sense. “This car was so special to me and such an important link in the history of dirt modifieds,” He said. “It doesn’t seem right to leave it locked up in a garage where nobody else can see it.” The 1977 Tobias chassis was the first-ever dirt modified to utilize a torsion rack and torsion bars for both the front and the rear suspension along with a torque arm. For modifieds of the time, leaf springs were still the order of the day for both the front and rear of the chassis. Essentially, the Don Knapfel owned modified is the missing link in the evolution of dirt modifieds.


“That car was different than what we were racing at the time,” Lape continued. “It was unlike anything that we had ever seen before. We didn’t even know what the torque arm was if you want the truth. It was a wild design and to be honest, it was really just a big sprint car; a really fast, big sprint car.”

Lape and car owner Don Knapfel unveiled the fully restored No. 44b last summer at the Fonda Speedway museum [in Fonda, New York] and since then, the car has also been featured at the Saratoga Auto Museum [in Saratoga Springs, New York] this past November during the Lost Speedways weekend.

“I’m having a lot of fun going out to different places with this car,” Lape remarked. “All of the old stories that I’ve heard and the familiar faces that I’ve seen have made all of this worth it. We’ve been talking about bringing the car out again and we decided that bringing it to Syracuse would be one of the best places that we could take it.” After ensuring a means of transportation, Lape placed a few phone calls to Jack Speno and John Patrick with the Dirt Hall of Fame and Museum in Weedsport, New York. Needless to say, both Speno and Patrick were receptive to having Lape on hand with his 1977 Mr. Dirt title winning car.

“I talked with Jack [Speno] and John [Patrick] and they’re excited that we’re coming this weekend,” Lape stated. “It’s nice to know that people appreciate the history of the sport and go out of their way to make sure you feel welcomed. Having this car on display with the Dirt Hall of Fame this weekend is probably going to be the highlight of my winter.”

The restoration tour isn’t only going to be limited to this weekend by any means; in fact, there are a few more places that Lape and Knapfel are set to travel to in 2017. “We’re going to take the car down to the Northeast Auto Racing Expo [at the Viaport Mall in Rotterdam, New York] next weekend,” said Lape. “We’re also trying to figure something out with Lyle DeVore to bring the car to Malta [Albany-Saratoga Speedway in Malta, New York] at some point this season. I’m traveling more now than I have in years.”

During the 1977 season, Lape and Knapfel went to victory lane a total of 23 times; 10 of which came at the historic Fonda Speedway in Fonda, New York. Lape and Knapfel also won the 1977 Mr. Dirt title taking the top spot from 1976 title holder Will Cagle. For Lape, he would only rekindle the same kind of magic once more in his illustrious career behind the wheel of his famed 1982 ‘Troyer Destroyer’ chassis when he garnered 28 total victories that season.

Career win totals weren’t the only thing to change for Lape behind the wheel of the No. 44b, his outlook on driving changed as well. “I was ready to quit in 1976 to be honest,” remarked Lape. “But this car changed everything for me. I was finally able to race for a living and be a hired driver instead of going broke trying to race on my own funds alone. I was finally able to get paid to race.”

Lape’s whole racing career can be attributed to that one magical season behind the wheel of Knapfel’s No. 44b; the last 37-years of it at least. “I finally got to race for a living and that’s what I’d always wanted if you want the truth,” Lape said. “This car put me on that route. Never in a million years did I ever think any of this was possible. That one season really was a lifesaver as far as my racing career was concerned.”

A lifesaver is putting it modestly. Had Lape actually hung up his helmet for good in 1976, he never would have become one of the best drivers in the history of DIRTcar. His countless victories and track championships would have been a dream that was never realized; a Hall of Fame career unlived.

“I knew that we had something pretty special the moment I got in that car back then,” concluded Lape. “I just didn’t know how special it was really going to be and I certainly didn’t know how it was going to change my life. We had a dominant year back in 1977 and I owe a lot to that car; I really do.”