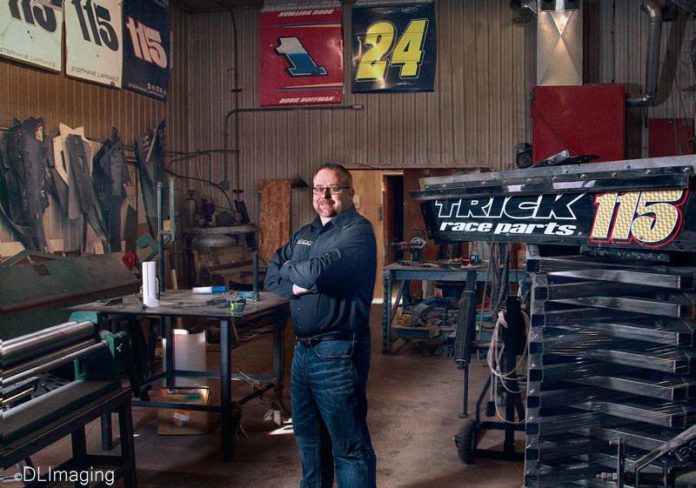 Since a young boy, Stephane Lafrance dreamed of living in the fast lane. The son of Dirt Hall of Fame driver Marcel Lafrance, Stephane grew up surrounded by the racing life style.
The summer months were filled with racing, car repairs and modifications. Stephane learned much of his trade by watching and helping his dad. As time went on, Stephane would spend much of the summer months traveling and crewing with racing legend Bob McCreadie.

Through the countless races he attended and helped in the pits, he was influenced by some of the great drivers, such as Bob and Jimmy Shampine. One person stood out of all the people he had met, a driver and car builder named Dexter Door out of Albany, N.Y., area.

“Dexter inspired me to follow my dreams, and to learn the skills [that he needed to compete in this very competitive sport].”

Therefore, in 1985, Stephane took the leap and built his first race car to compete in the Street Stock class. The car painted in the traditional Lafrance beige color that his father used through much of his career, and sporting the number 115, that is a derivation of his father’s famous number 15.


In 1988, Stephane joined his father in the Modified Division and built two cars, one for Marcel and the other for himself. From the very first race the cars were very competitive with Marcel winning 12 races that year and Stephane in the 115 car, coming in second place in many of those races.

As Stephane remembers, “It defiantly was a great year competing against and along side my dad and that I had built both cars from the ground up. It was a great season and validated all my hard work and ideas.”

In the early 90s, Stephane found a home running in the Sportsman class and concentrating on building up his TRICK Race Parts business. In 1997, Stephane returned to the Modified ranks and would prove to be a dominant force at times against some of the toughest drivers and tracks on the DIRTcar tour. Running a home built car, incorporating his engineering as well as his driving skills, received recognition by many

In 2009, Stephane decided to take the year off from racing and put all his energy into running his business. Things had really picked up and there just wasn’t enough time or resources to campaign a race car along with the parts business.

By late 2009, Stephane got anxious to get back behind the wheel of 115. With some ingenuity and hard work, Stephane completely redesigned the car, and was unlike any other in the pits. It was clear that this new design was going to be a dominant force early on in the 2010 season.

Stephane picked up 11 wins plus the track championship at Edelweiss Speedway along with the regional DIRTcar series championship in 2010.

The success of 2010 would continue into the next season, winning the 2011 track championship at the Cornwall Speedway. He continues to this day to be a regular in the winner’s circle at Cornwall and Brockville Speedways.

Yes there have been some ups and downs along this journey but Stephane did things his way. Engineering and building his own cars along with suspension and drivetrain parts, it was a lot of hard work but very rewarding at the same time. There are very few drivers that have achieved this success today because almost all drivers purchase a complete car from a manufacturer. Stephane always wanted do all of the design and manufacturing himself. Throughout history racing has always been about bringing to the sport your own ideas and designs.  Something Stephane has proven to be one of the best at.