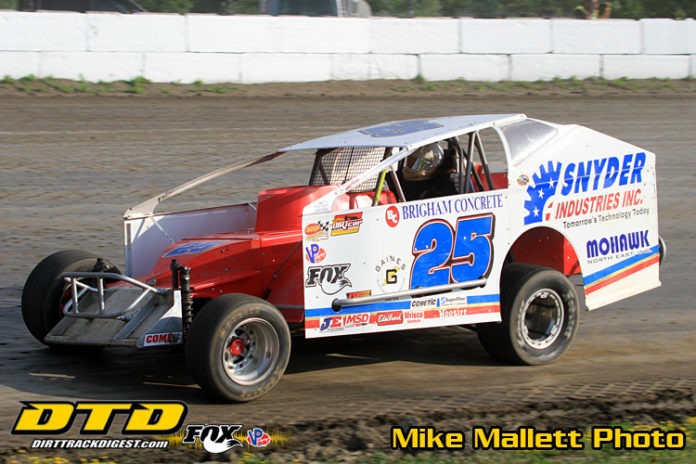 RANSOMVILLE, NY – Much like he has in the past, Erick Rudolph has an ambitious schedule planned for the 2017 racing season that includes two nights of weekly racing. He’ll also hit to road to compete with the Super DIRTcar Series, the 358-Modified DIRTcar Series while also defending his title on The Mod Tour in Western Pennsylvania and Ohio.

“I’m really excited to get going,” stated Rudolph. “I don’t think we’ve had this good of equipment all lined up to go into one year. We’ll definitely be busy this year. We’ll start off with weekly racing in April and May before hitting the road a lot during the summer. We’ll have our hands full but we’ve got good teams with good equipment.”

Rudolph will drive for BBL Racing for his weekly schedule. He’ll call his hometown track Ransomville Speedway home on Fridays before committing to action on Saturday nights at Canandaigua Motorsports Park. He’s hoping running the big-block weekly at Canandaigua will improve his overall program.

“Basically it comes down to that fact that I felt like I would learn more and get better as a driver running there,” commented Rudolph about his plans to run at Canandaigua. “I felt like I’d learn the big-block more if I ran there. I think it will make me better in the small-block as well. The big-block is a little more challenging. As a team we are ready to learn and hopefully it makes our whole operation better. I believe the extra night a week in the big-block is going to help.”

BBL Racing will also provide Rudolph the opportunity run several 358-Modified Series events, special events at Cornwall Motor Speedway and races yet to be determined where a DIRTcar legal small-block is the preferred combination.

Rudolph’ partnership with Randy Chrysler is set to continue as the potent duo return to defend their title on The Mod Tour. Last year Rudolph captured the championship by 40 points over Rex King Jr. The title was capped off with a win in the Russ King Memorial at Sharon Speedway.

The Chrysler team also will provide support for Rudolph to run events on Brett Deyo’s Short Track Super Series along with other non-sanctioned events. The team started their season together already at the DIRTcar Nationals in Florida.

Rudolph’s family owned No. 25 has a schedule of 15 to 20 races with the Super DIRTcar Series tour.