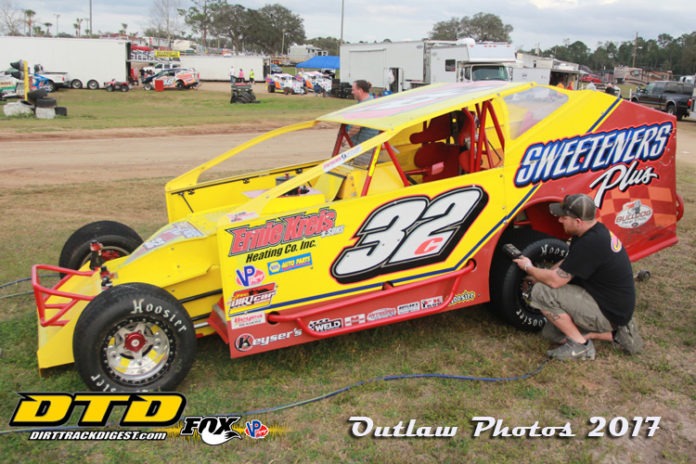 On Friday afternoon Matt Sheppard and Vic Coffey announced via Facebook that they’d be teaming up to run for the lucrative weekly payout offered at Outlaw Speedway in Dundee, N.Y. The pair were both present at Utica-Rome Speedway’s awards banquet Saturday night where they went into more depth about the how the deal came about and the plans they’ve put together for the 2017 racing season.

“Personally, no pun intended, but I get to get my neck straightened out,” said Coffey. “I got some disk issues in my neck. I have some born spurs and it’s become a real problem that I’ve ignored. There isn’t a real fix, but I can get it better doing physical therapy. It’s more or less me deciding right now that I to get out ahead of this.”

Coffey hasn’t been told he can’t race, but he’s been told to limit the things that can aggravate the injury. He finally made the decision that the time was now on taking a pause in his racing career.  That opened up the seat in his ride for Sheppard.

“I haven’t been told not to race, but what I’ve been told is I have to manage the things that make it worse and whipping around in circles in one of them,” cited Coffey. “I had to seriously look at what I was going to do. That got me looking at the opportunity of putting someone in the car. This is what we do. We still want to race. Just in conversation with him (Sheppard) at the RoC (Race of Champions) banquet I knew he had an interest in doing a Friday night deal. In the back of my mind I knew, potentially, there might be an opening in my equipment.”


The decision makes sense on multiple levels for both drivers. Coffey and Sheppard run a nearly identical program as far as equipment is concerned. That makes the transition and learning process much easier for everyone.

“It’s the best fit for my race team for several reasons,” stated Coffey. “Number one is that he can win. He’s not hard on equipment and we have a connection with the motor builder (C.C. Performance) and chassis (Bicknell). Most of our program is the same stuff and that is important to me, especially the engine guy. The last thing I want is turmoil in the whole thing. I think it will work well.

Sheppard had similar feelings. He’s wanted to run weekly at Outlaw due to the payouts. It just wasn’t feasible with his equipment. Since he wouldn’t be able to do it with his deal, getting in Coffey’s car was the next best option.

“Its top notch equipment,” commented Sheppard. “We run the same stuff. I’m in with Bicknell Race Cars, C.C. Performance Engines and Integra Shocks. That is important. We are both on same program. We both have relationships with Chuck (Cici) and Bicknell’s, hopefully it’s pretty seamless.

“I’m excited about it. It should be a good deal. Running three nights a week with my own deal was too much for me. I just couldn’t keep up. I still want to run three nights a week.  I’ve said all along I’ve wanted to support Tyler (Siri) and what he’s doing down there. I think he’s trying to treat the racer well and be good by them, but at the same time my program wasn’t really setup to run at his track. It worked out really well. They are going to dedicate a car for me to go down there in run.”

The hottest gossip over the off-season was that Sheppard was going to Outlaw Speedway but it wasn’t going to be with Coffey. Everyone had tapped Norm Hansell as the car owner supplying a ride for Sheppard at the speedway.

“I had talked to Norm (Hansell) a little bit,” cited Sheppard. “We had talked about maybe doing something, but nothing was definite. Then Vic kind of asked me. I got talking to him. With Norm having Duane (Howard) and being in Pennsylvania it kind of made a little more sense.”

Coffey plans on still being at the track on Friday night with his son Kyle Coffey. That has always been the plan. Coffey Sr. still isn’t sure when he’ll race or if he’ll race, but for now this is going to be the arrangement for the Coffey-McCreadie Enterprises team on a weekly basis.

“All this works right now,” commented Coffey. “We are going to try and win some races. My kid is going to run there on Fridays and we are going to run a car for him. As for me, I don’t know when I’m getting back in a car. I don’t have any weekly competition scheduled because I know I won’t be ready at beginning of the season. I’m not saying I’m not going to race, but I don’t know when or where. I will be at the track every Friday for Kyle and with Matt’s deal.”

Kyle may also run Canandaigua on Saturday night’s for the team. Everything depends on his college schedule and how much he is able to put in the time during the week in the shop.

Sheppard’s deal is for more than just Friday nights. He explained that the team isn’t only focusing their efforts on Outlaw Speedway but they’ll be hitting the road together competing in several other races as well with Brett Deyo’s Short Track Super Series. Their first as a combination coming in a few weeks at the Hard Clay Open at the Orange County Fair Speedway. They plan to hit some of the north region events.

Coffey didn’t seem to be too upset about the new arrangement with Sheppard and his son Kyle. His plan has been from the beginning has been to eventually turn the reigns over to his son. Coffey also indicated up that teammate Tim McCreadie will see some action in Modifieds this year as well.

“My kid, this is his second year,” said Vic. “We all knew once we decided to push his career along in racing that it was going to become more with him and less with me. The deal with Matt, I don’t think it can do anything but benefit our program. Timmy (McCreadie) would also like to run eight to 10 Modified races. We are going to have a lot going on.”

And in speaking of McCreadie, Coffey wanted everyone to know that he’s still a part of the team and that his new deal with Longhorn Chassis is a collective effort.

“I want to put out there, a lot of people have misconceptions that Timmy (McCreadie) isn’t involved with our program anymore,” he said. “We are partnered up with Longhorn in his deal. That is a major deal with us. A large focus of what CME is working toward this year is that Lucas Oil (Late Models) deal in conjunction with Longhorn and some of their people. It’s their deal, it’s our deal and it’s combined. A lot of people don’t realize that. They think he’s not with us anymore.”

Sheppard also outlined the other plans he has with his self-owned team. He’ll be defending his title on the Super DIRTcar Series while competing weekly at Utica-Rome Speedway for his home track DIRTcar points. He may also run Canandaigua, although he wasn’t sure if that will be a weekly deal or not.

“I’ll run Utica-Rome, the series and I’m planning on for the most part running Canandaigua,” stated Sheppard. “I’m not going to commit to going there every week. Maybe I will, maybe I won’t, but I don’t have any other Saturday night plans other than going there.”