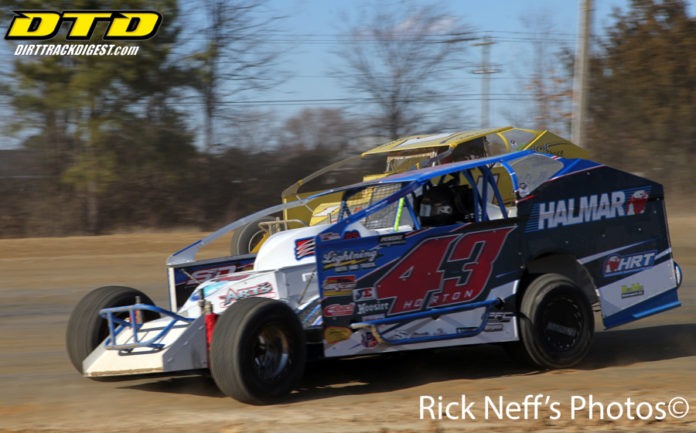 GEOREGTOWN, DE – There isn’t much Jimmy Horton hasn’t done in his spectacular career but the one thing that has eluded him was a win in a Brett Deyo promoted Short Track Super Series race. Well after today Horton can put a checklist beside that wish as he dominated the 49 lap Melvin L. Joseph Memorial Race to win his first ever STSS race on a very cold and windy day at the speedway. Horton has come close before on the series but has always come up just a little short at the end. The win by Horton was his fourth ever win at the Georgetown, Delaware track and was also the 464th total win of his storied career.

After finishing a solid third in his heat to get himself into the redraw, Horton drew the pole to start today’s feature. Getting the first starting position for the race, which was run on a very sunny and windswept track, was important as passing figured to be at a premium coming into the event. Surprisingly, the track had some bite to it early in the feature allowing the drivers to move around on the speedway and make some moves.

Horton jumped to the early lead only to let Ryan Watt snooker him on a restart to take command on lap four. After Watt got by Horton to take the lead, Ryan Godown making his maiden run in the Mike Petruska and Sons #66, also got by Horton dropping him to the third spot. A multitude yellow flags plagued the event as the drivers seemed all antsy after sitting all winter. Through all of the multiple cautions Horton had started to work his way up the front once again and by lap 17 had passed Watt to retake the lead. Horton talked about what happened on the restart that allowed Watt to pass him for the lead.

“The driver fell asleep. I let Ryan get by me and then I got jumbled up on the restart and Godown and Little Billy (Pauch Jr) got by me. I just had to settle it down and get back to the front. I knew we had a good car and I just tried to be patient and it all worked out for us today.”


Once Horton had the lead again, he never looked back and Watt wasn’t able to mount a serious challenge on the Neshanic Station, N.J., driver despite numerous yellow in the last half of the race that allowed Watt to get back on Horton’s rear bumper each and every time.

The one bright spot of having so many cautions was the fact that Horton never had to deal with lapped traffic which could have been difficult later in the race after the track had started to take rubber and pretty much became a one groove track. With so many cautions throughout the race I asked Horton if he was worried about fuel or tires coming down to the end of the feature.

“I was really concerned with both. We went with too much fuel down in Florida and I had the crew go with a little less for this race but luckily he put more in it than I wanted him to. We ended up with two inches of fuel left in the tank which is good. The right rear tire made it through; I really thought it would be more worn out than it was but it held up well.”

After all was said and done Horton sped under starter Warren Alston’s checkered flag for the well earned victory in his three race old 2017 Bicknell chassis. Horton first debuted his new Bicknell chassis at the DIRTcar Nationals in Florida at the Volusia Speedway Park and almost came away with a victory in its maiden voyage as he was leading the race with only three laps to go when an oil line came loose causing the car to smoke heavily and forcing him to pull off. Horton talked about how he likes the feel of his new car so far.

“This car has been good since I sat in it down in Florida. It’s a real good race car. We didn’t have to change much on it today at all. Matter of fact we didn’t even plan on running this car today, we were going to run our other car (TEO) but we had a little too much work to do on it so I said let’s just take this car and see what we got. I think what we got is a really good race car.”

After driving mostly all Troyer Chassis cars for the past several years team owner Ron Roberts and Ryan Watt decided to try something different to start out the 2017 season and purchase a new 2017 Bicknell chassis for the Boyertown, Pa., driver to try. Watt still has a couple of Troyer chassis in his garage and plans on using them as well as they have taken him to many wins in the past few season. The team installed their big-block into the new Bicknell chassis with plans to use it at the Bridgeport Speedway throughout the season. Watt and his team used Georgetown Speedway to test their new car to try and work some the bugs out of it before Bridgeport’s season gets underway. If today was any indication of how the car will do, it could be a long season for Watt’s competitors at Bridgeport. Watt talked about the car and how it did on its maiden run.

“The car felt good there in the beginning. That hole was brutal out there and I was trying to find a way around it and I left the bottom open for Jimmy (Horton) and he was able to get by me and that was all he needed. Another second at Georgetown for us but we’ll get one (win) here eventually.”

I asked Ryan how the new Bicknell chassis felt on its first run.

“It felt really good right out of the box, there’s still some stuff I need to work on with it but it wasn’t bad for the first race.”

David VanHorn came into today’s race with high hopes after a winter of getting his Fred Vahlsing #323 team organized. The team started to make the switch from Troyers to Bicknells midway through last season. VanHorn had a couple of good runs and was able to grab a feature win at New Egypt Speedway but never seemed to be able to get ahead and be able to settle in. This season VanHorn is ready to go and was very confident going into the day’s events.

After a good draw for his heat race, VanHorn lined up third in the first heat and looked to be in good shape to qualify as each heat qualified five into the feature event. Trouble struck VanHorn on the first lap of his heat and he slid off the backstretch allowing multiple cars to go under him before he could gather in back in. VanHorn did fight back but came up one spot short forcing him to run the consolation event which he won handily.

VanHorn lined up in the 21st position to start the feature event and steadily worked his way up and into the top ten rather quickly. He then was able to settle in for the last half of the race and stay out of trouble as those in front of him started having problems. Eventually VanHorn found himself running in the fifth position which is where he hung onto to the finish. It was a good run for the team and will give them some confidence going forward.

“I really messed up there in the heat by trying to go around the 90 and getting off the track dropping us back. After that we changed some stuff up for the consi and then we changed a little more for the feature. The car was good, I can’t complain. We definitely got a different chassis from Bicknell this year than what we had last year. We have a new shock package this year so I have to thank Dale Planck for helping out with that along with my father and my crew. After today we are fifth in the STSS points so hopefully we can keep it going when we get to Bridgeport in a few weeks.”

I talked to David about how it was coming from that far back at the start to get a fifth place finish on a track that was tough to pass on.

“It was definitely tough, in the beginning of the race you could use the top to get some of the guys that were hugging the bottom but then some guys started hitting that hole which was throwing debris up top and it got to feel like you were racing on marbles. So after awhile we just waited for someone to run into someone else and we were able to pick up some spots there. It was almost like a race to lap 25 when they started to use the single file restarts and then it was hard to get by anybody. Turn four was rubbering up and turn one and two were pretty slick. Luckily there weren’t any more cautions because the car ran out of fuel pulling up the trailer after the race.”

Georgetown Nuts N Bolts: Despite the cold and windy conditions the crowd although not a big as last year’s opener was still very good. Kudos to Brett and Heather Deyo for pressing on with the show and getting it run through very quickly….

The first Modified heat was scheduled to start at 2:00pm and actually took the green flag 15 minutes earlier at 1:45pm. The Modified feature took the checkered flag at 4:30pm….

The cars of Stewart Friesen and Rick Laubach had car covers on them while sitting in the pits with heaters on underneath the cars to try and keep everything warm under the covers….

There were 32 Modifeds on hand for the race with Rick Laubach, Jeremy Smith, Billy Pauch Jr and Brett Kressley winning the heats. VanHorn won the consolation race….

After finishing in the second spot in his heat, Duane Howard had the front end collapse on his Norm Hansell owned #357 while on the cool down lap and had to be towed into the pits. The team was able to get it all fixed in time for the feature in which Howard finished in fourth….

Jordan Watson had the driveshaft break on his #1J while he was leaving the pits to run his heat race. The team was able to replace it for Watson to qualify in the consolation race….

Although a quality field of cars was present despite the frigid temperatures. The teams of Craig Von Dohren, Jeff Strunk, Danny Creeden and Anthony Perrego decided to stay home and not participate….

The next race on the schedule for the STSS South Region is the “South Jersey Shootout” on Sunday April 23rd on the big 5/8’s mile oval. The STSS North Region will have it’s first race on Saturday April 8th as Orange County Speedway presents the “Hard Clay Open”….