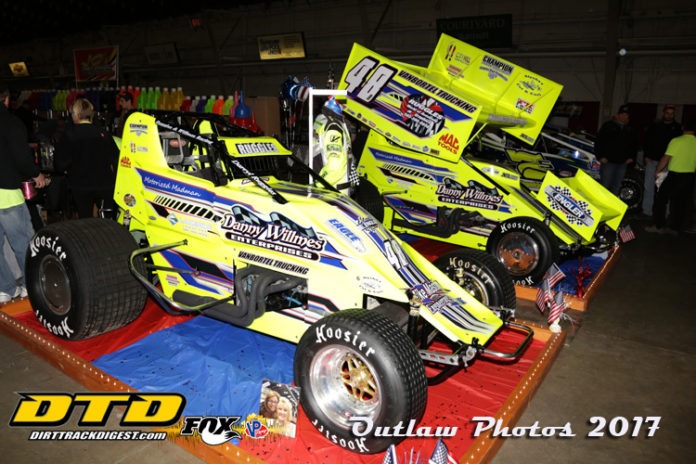 Wingless Sprint Cars were far more popular at this year’s Motorsports Expo in Syracuse than in years past. With two high paying events for the 360 Sprints without wings on the schedule, drivers are eager with anticipation.

The first event non-wing race is scheduled for the Canandaigua Motorsports Park as part of their opening weekend on April 14 and 15. The Sprint Cars hit the track without the top wing that Friday night.

Weedsport Speedway also hosts the 360’s without the wings on Sunday, June 25th. The show will be the highest paying non-wing race in the region with $5,000 going to the winner. Wingless cars on display at the show included Canandaigua, N.Y., driver Daryl Ruggles and ‘Lil Cobra’ Kelly Hebing.

Lucas Oil Empire Super Sprint regular, Coleman Gulick, has to be the odds on favorite for these events as the Binghamton, N.Y., driver has an extensive non-wing resume. Gulick spent time running USAC Sprint Cars and in 2011 he was named the series Rookie of the Year.


RACE OF CHAMPIONS DIRT CUTS BACK

Joe Skotnicki is attempting to reinvent the Race of Champions dirt series. Last year the series was plagued legal uncertainty and just down right bad weather. During the winter months Skotnicki went to work to make some changes to the series. There now will be only three Modified events on the schedule with one at Humberstone Speedway, Stateline Speedway and a yet to be announced track.   The Sportsman schedule is also being localized to the Western New York and Ontario regions.

“We got three races on there,” mentioned Skotnicki. “We have one TBA that we are still negotiating with the track a little bit, but we’ll have the schedule out. We are roping it in a bit. We’ve realized we have to do some things with more of a personal approach where we promote the events, more the way like Brett Deyo is doing them. We’ll have six Sportsman races more local to our region. We have to build this one block at a time.”

The Brewerton and Fulton Speedway schedules were released with little changes made from years past. The Brewerton Speedway opens the gates on May 5 with weekly racing until September. Returning to the schedule is the Super DIRTcar Series ‘Dual at the Demon’ on September 15. The final event is one of the most popular satellite races of Super DIRT Week as the Hurricane 100 is scheduled for Thursday, October 5.

Fulton Speedway begins the season on April 28 and 29 with the Highbank Holdup weekend. The Empire Super Sprints highlight Friday night’s schedule before the Super DIRTcar Series kicks off on Saturday night. Like Brewerton, Fulton runs weekly from that point forward until the first weekend in September.

Two big shows complete the Fulton schedule with Outlaw Weekend on the docket for September 29 and 30. Then one week late the World of Outlaw Sprint Cars return on Saturday October 7 as part of Super DIRT Week. The Win and Your In Modified feature is also scheduled that night.

Thank you to everyone that stopped by the DirtTrackDigest.com booth over the weekend.  It was nice to chat with everyone and hear so many kind words about the website.  We also appreciate everyone that purchased a t-shirt or played our cornhole challenge.  We hope to do that again in 2017.