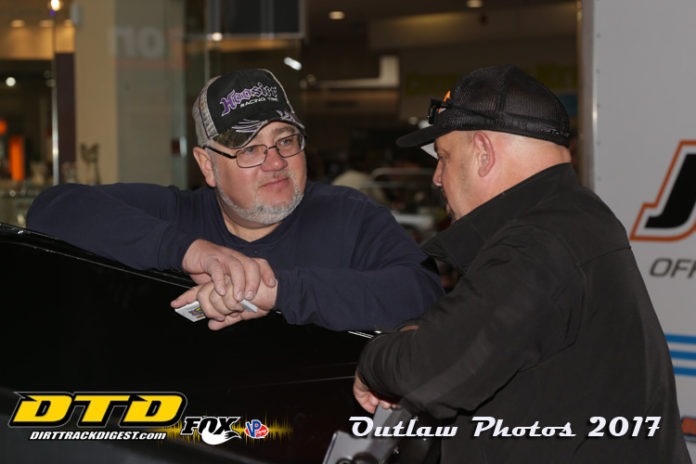 The Northeast Motorsports Expo hit the inside of the Via Port Rotterdam Mall this past weekend like the Blizzard of 2017 hit the Mohawk Valley on Tuesday. Piles of snow sitting in the parking lot of the ViaPort didn’t deter auto racing fans and enthusiasts from coming out in droves to take in all that was offered along the corridors of the mall and in a couple stores. Attendance was heavy all three days giving local tracks, drivers and owners a chance to show off their cars and give out schedules. The New York State Stock Car Association (NYSSCA) and North East Stock Car Old Timers (NESCOT) were both on hand selling memberships, calendars, and other racing memorabilia. And of course there was a lot of reminiscing. Newly elected NYSSCA President, Tom Coughlin was roaming the show greeting racers and fans and promoting the benefits of NYSSCA membership for the entire weekend. There was also entertainment in the food court area giving attendees a chance to sit down and enjoy singing and other forms of entertainment. One singer was Fonda and Glen Ridge Speedway flagger Joe Kriss who sang a medley of songs. Many at the mall are familiar with Joe’s talent as the singer of the National Anthem on many occasions at the Track of Champions. On Saturday organizer of the show Bob James of Bobco Racing Videos was honored by Demitraszek Enterprises, promoters of Fonda and Glen Ridge Speedways, for his 25 years of recording racing history at tracks in the Northeast. James and his video productions have been a mainstay at local tracks where he and his crew members shoot video weekly, preserving local racing and sometimes even settling an argument or two. As we shot this photo of James at the Via Port he was busy selling his videos along with helping out with N.Y.S.S.C.A. memberships where he also volunteers on the Board of Directors. “I’m not usually on this end of the camera”, said Bob as we asked him to pose with the trophy presented to him from Demitraszek’s alongside the Pro Stock that has special meaning to him. “This is the original car that Hondo drove,” said James, referring to his friend Hondo Carpenter who lost his life in a four wheeling accident in 2005. Each year James is part of the annual Hondo Classic for Pro Stocks held at Fonda to honor the popular driver that fans just seemed to love. This year’s Hondo Classic is July 1, 2017. Guilderland High School senior Ashley Celebucki was excited to show off her new ride for the upcoming season, a newly painted and lettered Pro Stock creation from the shop of Stone Motorsports. Ashley is moving up this year from her usual ride in a Cruiser at Glen Ridge. She will race in the Pro Stock at Fonda Speedway as a rookie. She raced a Street Stock a couple times last season and Fonda. Although the 17 year old loves racing, she began her career racing four wheelers, she is still keeping her eye on her future. She wants to become a nurse and has already been accepted at both Schenectady County Community College and Hudson Valley Community College in their nursing program. Ashley has chosen SCCC where she will begin in the fall.

Shaun Pangman of Cobleskill will be back behind the wheel of one of the Laudy Hoyenga owned Modifieds racing at Glen Ridge and Fonda this season. Early plans are to run in a few Super DIRTcar Series events which will include another trip to Eldora Speedway in Ohio this summer. Shaun says they are also tentatively looking at Super DIRT Week in October and Charlotte for the World Finals in November. The race shop officially moved to Shaun’s home over the winter into a new shop built by Shaun. Shaun and Laudy briefly met when Laudy was teaching at Cobleskill-Richmondville C.S. and then again when Hoyenga and Pangman were racing at Glen Ridge and they pitted next to each other. One night Shaun was having car problems and Laudy offered his backup car and that is where the driver/owner relationship began, just like so many others in racing. As things progressed and Hoyenga decided to retire from driving he still kept adding to his racing stable each year. As Shaun continued to improve, Laudy continued to buy cars, a new Troyer in 2015, Shaun recorded two wins, Hoyenga bought two more cars in 2016, a stacker hauler and truck and Shaun recorded two more wins. For 2017 the team has added two more cars and also another driver, Jim Nagle of Rotterdam Junction who is also a regular at Glen Ridge. Shaun says Laudy is the best owner and he is very happy with the way the team is going.

Danny Varin was at the show on Saturday, with crew member, Pete Northrup. Danny will once again be in the Ed Munger Magsrus No. 93 Modified this season and will be racing at Utica Rome on Sunday night. He will also be chauffeuring the Dave Cruikshank owned 360 Sprint again this season. The team experienced their first 360 Sprint win last season at Fulton Speedway on Jun 4th. Side note, Danny’s father Bobby won the same night at Fonda in the No. 00 Dover Brake sponsored Modified. Danny closed out the year with three Sprint wins (Fulton, Brewerton and Utica Rome) and two Modified wins both at Utica Rome where he wound up third in points. All in all young Varin was happy with his season but is always looking for more wins.