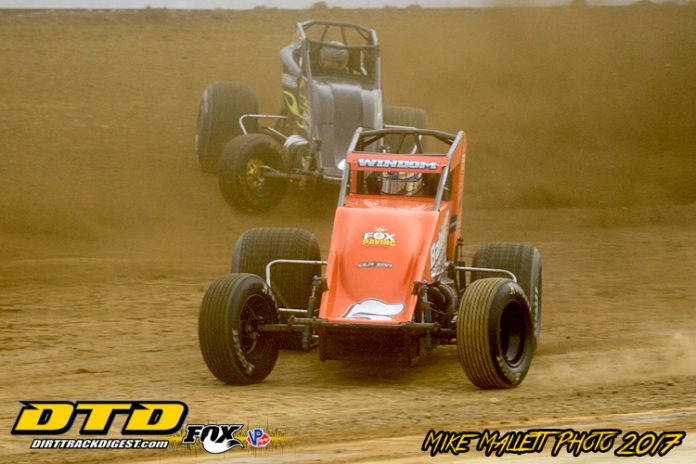 MANSFIELD, OH – After laying dormant for several years, the Mansfield Motor Speedway got a little dirty this past Saturday night with the first round of the Triple Crown Spring Series. It was billed as #BacktoDirt as gone was the asphalt and back to its dirt roots and picking up the $5,000 wins were Caleb Helms (Winged Sprints), Chris Windom (Non-Winged Sprints) and Rusty Schlenk (Late Models).

Cody Sommer hasn’t been shy of attacking difficult promotions. He was the man behind Indy Invitational at Banker’s Life Fieldhouse during 2015 PRI Trade show, he did the Gateway Dirt Nationals in the Dome at America’s Center in St. Louis. Now, he has leased out the track that was a five-time stop on what was the Crafstman NASCAR Truck Series. But, Sommer wanted Mansfield back to the original plan, the asphalt was ripped up and now you have one of the most modern dirt tracks in the Nation.

“I just want to thank everyone for the support, this was a huge task and there are so many people that spent a lot of hours here in the past few weeks.” Sommer said during the driver’s meeting. “Even though you see a beautiful speedway here, it sat for a while and it needed a lot of work. But, we want to do this for you, we want to give you racers a great place to race. Bare with us, we are new and there’s going to be some bumps but with your support you will be rewarded.”

While there was indeed opening night glitches, some avoidable, some not, Sommer and staff was rewarded with a very large and enthusiastic crowd and three feature events that provided action from start to finish.


Helms came into the weekend with hopes of some good runs and gaining more and more track time. He left with wins at Attica (the night before) and the trophy here at Mansfield.

While Helms started in 12th and put himself in position to win by battling his way to second on lap 25 of the 30 lap A-Main it took a flat right rear from race long leader Jac Haundenschild with three circuits to go that proved the final piece of the night’s puzzle.

“We drove all over the track to get past the cars and get up to second,” said the happy Findlay, Ohio driver. “I saw Jac, we were coming but not sure if we could have gotten him.”

Haudenschild took the lead from his outside pole starting spot and led every lap running mostly on the top of the fast Mansfield oval. The event went non-stop until lap 27 which was for him and disappointed many in the stands as Jac’s hometown of Wooster is mere miles from Mansfield.

On the restart, Helms was now the man in charge with DJ Foos amd Danny Mumaw behind. While leading is important it was even more for Helms.

“I was losing brakes as the race went on and then when the yellow came out they totally were gone,” Helms said with some relief. “You need them in traffic and I probably used them up but when they went thank god I was now leading.”

The three laps went by without a hitch and Helms took the win which for now is easily his biggest highlight of his still short career. Foos, Mumaw, who’s front wing was damaged followed with Tim Shaffer and Brian Lay following. Haundenschild rebounded to take eighth.

While many of the fans might have felt heartache for Haudenschild on the winged event. The wingless event he was back at what he does best as a key participant of a two car race that might go down in many memories as one of the best races seen in many eyes.

The wingless event saw Haudenschild lead the first circuit from his outside pole starting spot only to lose it to Shane Cottle on the second go round. Cottle was holding strong in the lead with Chris Windom and Haudenschild close behind.

The caution lights shined on lap six and it was for Cottle. In what looked like a broken left rear suspension, it was enough for him to take the car in the infield and become a spectator. The next 24 laps produced what will be conversation for decades, those conversations such as “remember that wingless race when Mansfield opened back up on dirt?”

Chris Windom means wnigless, a top notch runner under the USAC banner and defending Silver Crown champion he is simply one of the best. Jac Haundenschild is known to have fun with his top on, former World of Outlaw regular and also has been regarded as a driver with no fear. While Jac has hundreds of winged wins, just to show you the talent he is, he won the Eldora Mopar Million event…for wingless cars in 2003.

When the green flag was back out. Haudenschild kept Windom at bay and Windom was throwing everything he had at him. They were side my side several times only to see Haudenschild lead every lap at the stripe.

Lapped cars just added to the excitement and on lap 16 Windom found the lane to sweep under. But, the final 14 laps provided more action than anyone could write or record. You just sat back with your mouth open and watched… in disbelief.

The two were swapping leads, bouncing off walls, almost spinning out and diving in and out of slower cars on every lap!. With three to go it seemed Haudenschild made moves to put THIS ONE in the books. But, with two to go he got sideways in turns three and four and there was Windom.

Windom got by two more slower cars to hold on for his $5,000 pay day. Haudenschild took second with Landon Simon, Pa’s Carmen Perigo and Dallas Hewitt rounded out the top five.

In victory lane, the Canton, IL chauffer couldn’t have said it better… “Holy cow, Jac Haudenschild is BAD ASS!” as a roar came from the crowd. “That is the most fun I have had in a long time! What a race!.”

While a non-sanctioned event, you can tell this was special to Windom, “I knew he would compete right to the very end and even with the track how it was, it was just a fun race,” he went on. “I am so glad to see this track back. I know there were so many obstacles but I hope the fans so a good event tonight. Totally glad to be here.”

The full fendered division also put on a crowd pleasing 30 lap event with three cars vying for their $5,000 pay day throughout. West Virginia’s Corey Conley took the lead early from Doug Drown who lost a driveshaft and appeared to be the class of the field.

A lap 12 caution bunched the field up which is what Ohio’s own Rusty Schlenk and Casey Noonan needed. The trailing duo took a liking to Mansfield’s cushion while Conley liked it down low. When the green lights came on, both Schlenk and Noonan took advantage.

The two were never more than a few car lengths apart right to the end but this was Schlenk’s night. Also a big night for CJ Rayburn. Rayburn late models were extremely popular in the 80’s and 90’s. Schlenk is out to make them a name in the game once again.

“I just have to thank CJ (Rayburn) for the opportunity. He trusted me in getting his name back out and hopefully his cars back into victory lane,” Schlenk continued. “The car was comfortable everywhere but on top we really seemed to have good speed.”

Behind Schlenk and Noonan was Conley, JR Gentry and Larry Bellman.

MANSFIELD PIT NOTES: The pit log was made up of 28 winged sprints, 25 non-wing and 15 late models…The track proved very dusty during warm-ups, after a lengthy two hours to completely rework the track it was decided to scrap the time trials…After the heat lineups went to the draw, Danny Smith decided to load up and head out, but he was the only car. The rest wanted to put on a show…The Matus team was very, very busy. Both father and son Brent and Brandon Matus as well as teammate John Garvin entered both winged and wingless portions of the programs, with the same cars! Oh were they busy all night…Haudenschild was using the same tail tank on both of his cars…With the pyrotechnics the night had a big event feel such as seen at Knoxville, Eldora and Charlotte…The Triple Crown Series continues the next two weeks with the same divisions and each feature will pay a nice $5,000 to win.