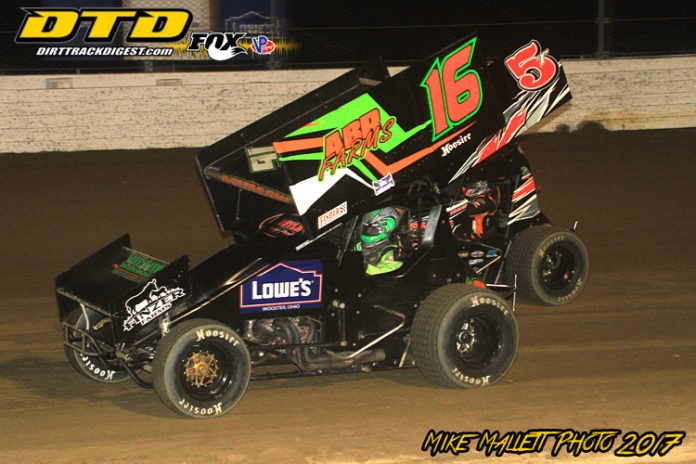 Saturday’s reopening of the Mansfield Motor Speedway saw a little bit of everything.  There was the good and the bad, but at the end of the day fans were treated to some great racing.  As has been outlined in other places on DirtTrackDigest.com, Caleb Helms, Chris Windom and Rusty Schlenk were victorious on opening night.

Although DJ Foos finished in the runner-up position, the Fremont, Ohio, driver couldn’t get shake the smile as he climbed out of his No. 23.  The 27-year-old driver had nothing but great things to say about his night and the Helms team that came out on top.

“To be able to come to a track like Mansfield, they really put in a good effort,” commented Foos.  “It shows that they want to have a race track.  We got here, it was a little sketchy but they worked on it for a long time.  They got this thing really fast and nice.  It’s a new track so they have a few things they need to work out.  We had a really good run.  We started seventh and got up to second.  That last restart I thought maybe I had a chance but Caleb (Helms) was so fast tonight.  They are such a good group of guys.  They deserved this win.”


Foos elected, at times, to drive his Kislter powered Maxim car right though the rough spots that developed in the new surface.  Because of the high-speeds attained at the track, that proved to be his only way to pass cars.

“The track was so fast, you could catch a guy quick, but to be able to pull off the top and pass him was another thing,” stated Foos.  “You just had to make your moves.  You had to enter high and drive across the corners.  That was what I was trying to do to get a good straight run at them.  That set you up for the next corner so you could dive bomb them a little.  That’s racing.  When I said I had to dive bomb guys there were a few times I thought I was going to flip.  The thing would catch a rut, hop and bounce.  I just kept my foot in it and hoped for best.”

Original plans didn’t even have Foos attending the race, but at midday as the team was washing the car they decided to make the tow.  It ended up working out for the best with a second place effort.

“I was really happy to finish second tonight,” he said.  “This car has a lot of speed.  It’s a brand new car.  It’s awesome to be in second place.”

Wooster, Ohio, native Danny Mumaw capped off his afternoon by earning the final spot on the podium.  Mumaw ran as high as second after starting third before surrendering a spot late.  As mentioned, the track got a bit choppy late which was right up Mumaw’s alley.

“We started third, got to second and tried to keep up with Jac (Haudenschild),” mentioned Mumaw.  “I don’t know what happened to him but he was on another planet.  We broke the nose wing off at the end and got a little tight but we maintained.  I loved the rough track.   I road dirt bikes my whole life and this was like, giddy up, so I had a ball.  I can’t wait to come back.”

One of the best races throughout the A-Main was between Mumaw and Travis Philo.  The pair had a good hard nose battle with Mumaw coming out on top after Philo headed to the infield with mechanical issues.  He ended up getting the spot by using the rough patches to his advantage.

“We were battling,” stated Mumaw.  “I ended up getting into him a little bit on the backstretch.  I’m sure that woke us both up, I know it woke me up.  I don’t know, my car was really good if I went through the middle and turned down across the bumps.  I was just trying to stay smooth.”

VETERAN PRESENCE NEAR THE FRONT

Tim Shaffer got it done on Saturday night.  The veteran from Aliquippa, Pa., drove from 14th up to fourth.  Shaffer had to make up ground after pulling a bad pull to begin the night.  That forced him to start near the back of his heat race after qualifying was scrapped.  He made the best of it to get into the top five at the end.

“What a night,” commented Shaffer.  “We started off the night with so much dust we didn’t think it would ever happen.  Then Rich Farmer gave the promoter a hand and we got the race in.  That’s awesome.  I want to see this guy succeed and do good.  We are losing tracks.  It’s awesome to have another one.  This track is ideal.  Its state of the art other than the surface, but it’s the first night.  They put it down over the winter and we all knew it was going to be tough.  We are happy to come from 14th to fourth.  For an old seasoned driver it was good.”

Shaffer was quick to credit the hard work of his crew that gave him a great car on that night.  Shaffer’s No. 49x was maneuverable.  He wasn’t glued to one lane or another.

“I could move around, that was key,” said Shaffer.  “Like I’ve said, with Cody Jacobs working on the car this year he’s given me a great car that is fun to race and it lets me shine a little bit.  That’s ideal when you can move around, definitely that was an advantage for us tonight.”

For Shaffer the run continues the success that he’s had since reuniting with Jacobs.  The pair had success with CH Motorsports and now they are doing it again.

“I put myself in a situation the last three years where you think you can do it, but it’s too much,” mentioned the veteran.  “You need great people around you.  That helps get you by.  With Cody on board, we got Joey Demyan, Joe’s son that owns it and Jeff Rudzik, who owns it, his boys taking turns and helping out.  We got people that come and help us that know what’s going on.  It’s fun for me because I don’t have to do as much anymore.  I get to watch the track and other guys and see their weak spots.  That is key.” 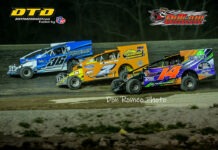