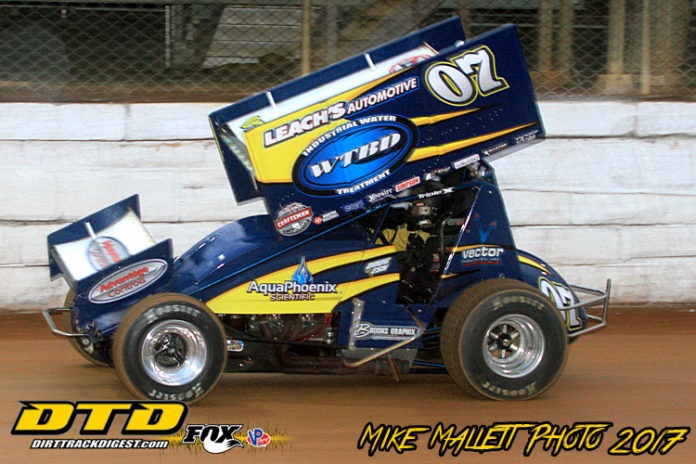 Doug Esh lived up to his nickname, ‘The Hammer,’ on Saturday night at Port Royal Speedway as he was flat out the entire distance of the 25-lap feature event. Mother Nature offered Port Royal plenty of moisture in the days leading up to Saturday night’s A-Main. That made the track lock down fast. Esh was fortunate to earn the pole position, from there he led the entire race to earn the win over Greg Hodnett.

“It’s huge,” said Esh of drawing the pole. “(Greg) Hodnett is one of the best cars in Central Pa., and I would have had to make a bad mistake for him to get by because everybody was kind of parallel. We were all locked down so well. You just have to make good decisions in lapped traffic and we were able to do that.”

Esh’s biggest move of the night might have been in the heat race. Esh started fifth, but made the right decisions to earn the win. That put him on the pole of the feature.

“I needed to be in the top three and I was able to get there,” commented Esh. “I guess I’m just greedy. A race is a race so I wanted to win it. We were able to get by (Rick) Lafferty there and get that win. That set us up. We got lucky and pulled the one.”


Because temperatures were hovering in the low 40’s, speedway officials decided to hustle the show along. As a result, they started all 26 Sprint Cars that had towed to the track. Due the increased cars on the speedway, Esh found himself in lapped traffic quickly during the feature. His first encounter came on lap four, then again before halfway before finishing the race in traffic. Needless to say he had a few close calls that could have saw his day come to an end early.

“When we got to lapped traffic it seemed like the whole field was right there and they are racing too,” cited Esh. “They were off the pace quite a bit. You were just trying to make your judgments right. They don’t know you’re coming so we had more than one close call. We were just fortunate to get through them and make the right the decisions. Sometimes it’s just better to be lucky than good.”

Every driver knows it’s always good to start the season off on a positive note. He now has a win to go along with sixth place finish on opening day.

“Wins are huge,” stated Esh. “It’s everything, momentum, you know your shits fast and the car is operating. The team gets pulled together. It’s more important than anything to get off on the right foot and race good. That’s all we are trying to do. Get started and have some success early.”