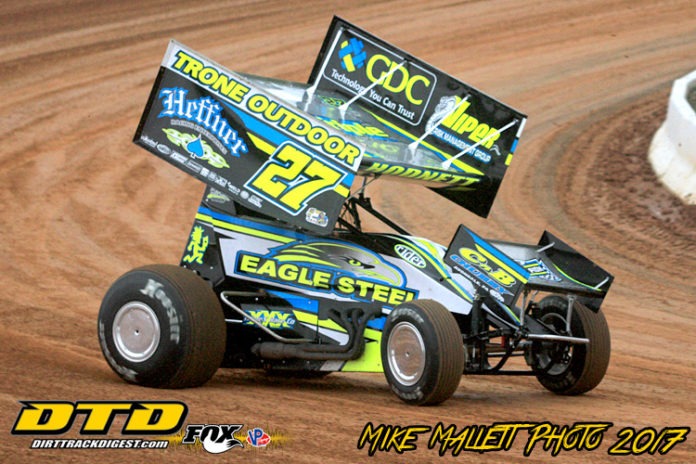 Florida was not kind to Central Pennsylvania standout Greg Hodnett. The Mike Heffner owned team struggled to find speed during their two week stretch in the Sunshine State. Luckily, things have turned around now that the team has returned to the comfy confines of Pennsylvania. Hodnett has a win and two podium finishes including his second place effort on Saturday night at Port Royal Speedway.

“We struggled a bit in Florida,” said Hodnett. “We came home and kind of rechecked and found a few things that were a little off. Hopefully we fixed those few things. We’ve been running a little better here, but we’ll see when the All-Stars and the Outlaws come back to town to see if we are really good as we need to be. I think we are okay. We just need to be a little better in some areas. We’ll keep working on it.”

Saturday night at Port Royal, Hodnett won his heat going away and started third after a zero inversion pill was pulled for the 25-lap A-Main. Hodnett got to second in the opening laps before challenging Doug Esh for the win. Hodnett stalked Esh each and every lap, pulled alongside multiple time on restarts before being forced to settle for second on the ultra-quick track.

“I thought we were around the same speed as Doug because on restarts I could kind of keep up,” mentioned Hodnett. “His guys moved him up on the last restart.  He moved up so I had to change my line and figure out where to go next. That’s just a part of racing. At that point the top was entering better and he had found it. We were going to be there until something happened. From that standpoint, yeah traffic would have been great, but considering how much everything was happening, how fast it was happening, it was trying. Luckily we survived and the fans got to see a pretty good race.”


Traffic was a battle to say the least as Hodnett mentioned.  The cars running near the tail of the field were significantly slower than the cars running at the front of the pack. As a result, Hodnett and Esh had some very close calls. For Hodnett, he nearly was collected when Eric Tomecek broke coming off of turn four.

“When he was saying ‘Oh shit,’ I was basically on his tail tank doing the same thing,” joked Hodnett. “It was a really fast track. Sometimes the speed disparity shows up a little more on a track like this where everybody starts and all that kind of stuff. Really, to me, the biggest thing was when guys had problems they couldn’t get off track. Those were the bigger ‘oh wow’ moments. A couple times guys were slowing down or breaking and you are literally doing 140 mph. The speed differential was just huge.”

Rick Lafferty started the feature fourth after a runner-up finish in his qualifying event to Esh. The New Jersey native and former track champion wasn’t able to hang with the top two but had a solid night overall finishing in third.

“Tonight was a gas on night,” commented Lafferty. “If you start up front, you finish up front if you didn’t mess up. We ended up third. It was a good night.”

Although Saturday night wasn’t originally scheduled to be his first race of 2017, Mother Nature made sure it was for Aaron Ott. Ott towed out to Kansas last weekend only to have rain cancel the entire program. Thus, Saturday he made his debut at Port Royal. The East Berlin, Pa., had issues in hot laps with his top wing before having a strong run in the heat race to put him fourth in the feature starting lineup.  At the start he fell back out of the top five before regrouping to finish in fourth.

“It was kind of an up down night all night,” said Ott. “In the heat race we were good, but I didn’t feel right. I thought something might be wrong with the motor. It didn’t have the right pitch, but it’s been five months so I think I was just paranoid. The track was fast and I didn’t want to blow it up. We only have one here tonight. We played around with the gear and thought about playing around with the fuel. We were decent in feature, but we had all good cars in front of us. I screwed up on the start. We had a full fuel load and I shouldn’t have went in on the top. I know better than that. I lost some spots, fell back to sixth or seventh before we fought our way back up to fourth. We pushed Lafferty across the line.”

Ott hopes 2017 is a strong season for his family team. Ott’s run out of the box was good, but he wants to carry that momentum for the season.

“We have some big races coming up end of April,” said Ott. “We look forward to getting the season started. Usually we can start the season off strong. The biggest thing is staying strong and ending strong, that’s what we’ve struggled to do the last few seasons. We got our work cut out for us. We are looking forward to getting 2017 started.”

Steve Buckwalter drew the second worst pill of the day relegating him to an eighth place starting spot in the third heat. The only driver that drew worse was Eric Tomecek who started ninth in heat one. Buckwalter was on point in the heat. Buckwalter blasted from the back row to finish second behind heat winner Hodnett. That heat finish saw him start sixth in the feature before a fifth place effort in the feature.

“We were starting last in the last heat so we just figured get into the show and maybe get a top ten, but I got real good start in the heat and got up to second,” stated Buckwalter. “That started us sixth. In the feature I felt really good in the beginning but after the one yellow it starting getting loose. We’ll adjust for it for next week.”

Buckwalter mentioned that the team has had some motor issues to start the season. Finishing the race was a step toward getting the season headed in a positive direction.

“As much motor trouble as we’ve had, we had a brand new cam we put in right before Florida, we ran it four nights in Florida and it broke the first night at the (Williams) Grove,” commented Buckwalter. “It’s really the only new part we put in the motor. We got another one in and it seems to be running fine. So that’s been our big thing. We get things right with the car then the motor will break and we’ll have to sit a couple weeks. We got two motors, but they are both on their last legs. Hopefully we can try to find a third one or work something out so we can get another one.”

26 cars were in attendance, 10 more than the season opener last week…

Heat wins went to Esh, Ryan Smith and Hodnett while the B-Main was scrapped due to the colder temperatures that hovered in the mid-40’s…

Although the track was lockdown fast, the 410 Sprint Cars had very few cautions on the day and no red flags. All of the cautions that were displayed in the feature were for cars slowing with mechanical issues…

Carl Bowser made his season debut for Tom and Fran Chiappelli. The day fair well for them as they ended up 14th.

For a full photo gallery from the event CLICK HERE.